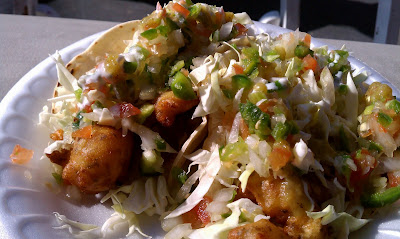 Originating from sunny Ensenada, fish tacos are a common sight in California. On my visit back to Los Angeles, I finally got the chance to see what the fuss was all about. Ricky's Fish Tacos, a stand that would be perfectly for a futbol tailgate, had been on my list for a long time. Since my previous experiences with fish tacos were at Rubios or Wahoo's, I needed some convincing that fish tacos were more than just overbattered and greasy messes.

Since I had trouble finding Ricky's, I will devote time to explaining how to find it. Luckily, Christine, the older sister who I never wanted, was an expert and guided me in the whole process. First, check Ricky's Twitter @rickysfishtacos to see if he's open that day. For the most part, he is open Wednesday through Sunday afternoons. However, since he also caters private events, check the Twitter feed for more accurate information. 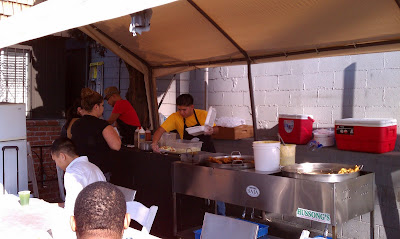 Second, as I mentioned above, Ricky's is not a traditional restaurant. As you can tell from the picture, it is an outdoor stand of not more than a few tables, a frying vat, and some coolers with fresh seafood underneath a canopy. That said, he's in a small yard at the corner of North Virgil Avenue and De Longpre Avenue, across from the Vons parking lot. 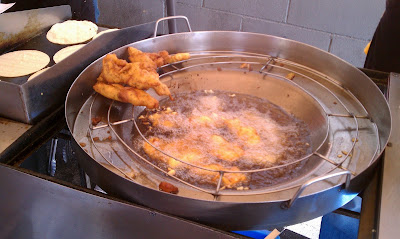 Once you arrive, go up to Ricky or his assistant and place your order. He has fish or shrimp tacos. If you're lucky, he will also be serving lobster tacos. They are fried in front of you in a golden vat. If you stand too close for too long, you too will smell delicious. 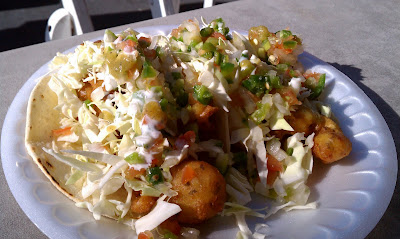 I ordered one shrimp and one fish. I was not lucky that day. A person of normal appetite will probably be okay with two or three. I can report that Ricky avoids the main problem with battered and fried fish, the batter does not dominate the flavor. Also, it felt surprisingly light; you don't get the uncomfortable feeling that usually accompanies a meal of fried fare. The pico de gallo and cabbage give some textual variety while the crema and salsas added flavor dimensions. None of the accompaniments overpowered the centerpiece seafood though. If you do feel like throwing the flavors out of balance, additional sauces are available for self-dispense.

That day, Ricky was also serving cucumber and spinach agua fresca. This was an odd combination for me, but perfect for the unseasonably warm January day. 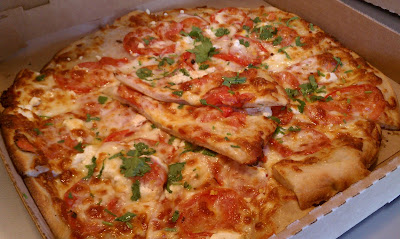 Cheese Board's pizza of the day with gratuitous extra slices

Being a transplant from California to New York, I am often asked to verify New York pizza claims. Is it really that much better? Does it put California pizza to shame? I always respond with the politically calculated answer--they're different. Those who know me know that I don't need to hedge my response to save feelings. If something is objectively better, I'll say it. But pizzas from California and New York really are different. Too often people only make the distinction between Chicago style deep dish and the Neapolitan thin crust as the only two kinds. Yet, my recent trip to Berkeley's famous Cheese Board Collective reaffirmed my conviction that the differences even among thin crust pizzas need to be highlighted and celebrated.


More...
Breaking it down simply, New York pizza is all about simplicity and execution while California pizzas are about complexity and creativity. Both types emphasize the importance of quality ingredients, but the East Coast cares much more about the fundamental building blocks of the pizza--dough, sauce, and cheese. California pizzerias don't cling to tradition; of course they don't, there is no pizza tradition in California. Starting with Wolfgang Puck, the pizza in California has always been innovative and new. The focus is on the ingredients, often a blend of the unexpected. In fact, if you look for a "traditional" pizzeria in California, you're likely to be steered towards New York or Italian transplants.

Just as a personal anecdote, during my first New York pizza experience years ago at Grimaldi's, I had a plain cheese pizza. I hadn't had pizza with no toppings since it was forced on my as a kid at party's thrown by picky eaters. It was then that I realized New York and California pizza just don't compete in the same field. Just as you don't order a pizza with no toppings in California, you don't order a combination pizza in New York.

The Cheese Board Collective started in 1967 as a cheese shop. In the 1970s, it began baking bread and earned renown for its baked goods. It actually wasn't until 1990 that it began selling pizza, the draw by which I first discovered it. In an informal poll among my friends, any reference to the Cheese Board was always followed by, "the pizza place." 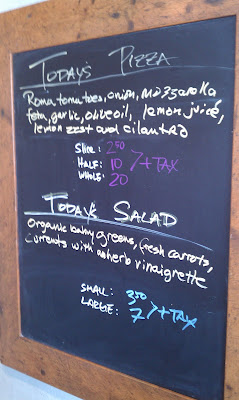 The Cheese Board offers one pizza selection a day with no substitutions. Its emphasis is on fresh, local ingredients, no surprise given the store's location on the other side of the street from Chez Panisse. While many California pizzas strive to impress you with over-the-top exoticism (hello, Jamaican jerk chicken and Peking duck), this pizza was comparatively plain. The pizza was outstanding, with lemon citrus notes and cilantro playing up the garlic and roma tomatoes. Sharp hints of feta gave some variety to the workhorse mozzarella. Best of all, the pizza was accessible, something you think you can make as long as you have the best ingredients. 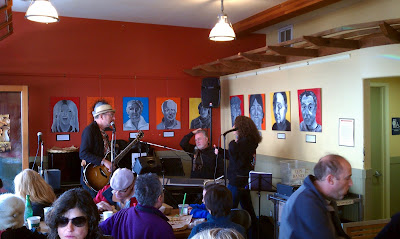 The appeal of the Cheese Board is beyond just a solid appreciation for its food. It is a collective, owned and operated by its workers. The open store front and live music play up the atmosphere and it's hard to come out of the experience without a smile. And of course, a healthy amount of civil disobedience was thrown in across the street by patrons without a table at this busy joint. Let's not forget where we are boys and girls. 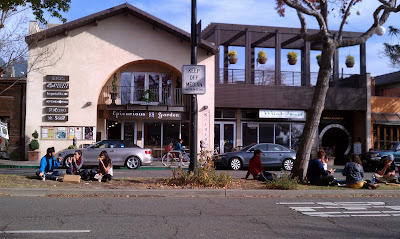 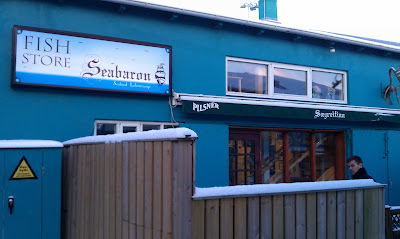 Besides Baejarin Beztu, the other name I kept coming across on Chowhound posts about Iceland was Saegreifinn, a.k.a. Sea Baron. This casual restaurant is more fish shack than fine dining. Customers order at the counter then sit on narrow fish barrels along communal benches. Still, even Mark Bittman has called out Saegreifinn for its outstanding lobster soup.
More... 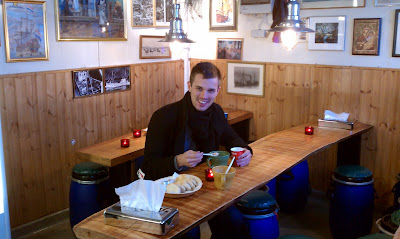 The entire dining area is tiny. At the time I went, there weren't very many customers and people rotated in and out fairly rapidly. I imagine during high tourist season in the summer, the place is packed to the gills. As with almost anywhere else in Iceland, the proprietors speak perfect English. Their English was so good in fact that I frequently forgot to practice the Icelandic phrases I picked up for the trip. I did however, satisfy my goal to be able to pronounce Eyjafjallajökull, the volcano that erupted last year. 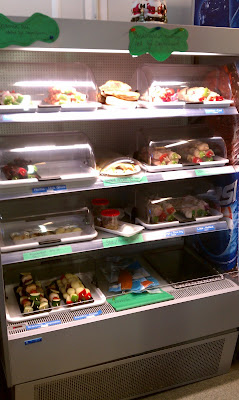 I believe Saegreifinn serves their famous lobster soup year-round, but check the display case for the local catch of the day on kebabs. The soup has a Nordic flavor profile, rich and hearty with some slight sweetness and ample amount of lobster. The locally fished lobster is smaller than we're used to, but sweeter in taste. It actually reminded me more of crawfish. I've been told it is specifically langoustine. Indeed it does have that same taste. 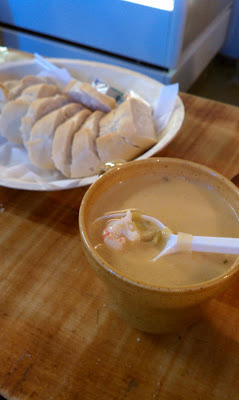 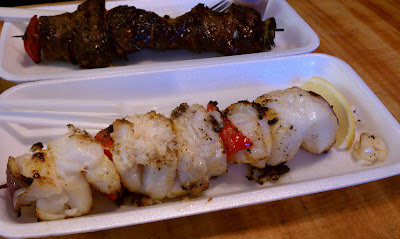 From the fridge, we picked out a halibut kebab. The waitress brought the kebab to the back to be grilled while we warmed up with the soup and heaps of crusty bread. The soup and the complimentary bread would be enough to make a light lunch, but we were about to head for the airport. While the fish was certainly fresh, it lacked the flavor of the outstanding Pacific halibut I had in Alaska. 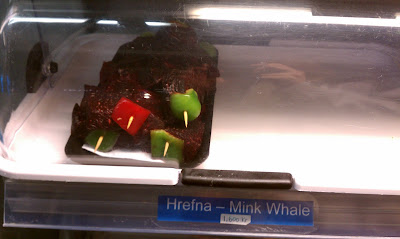 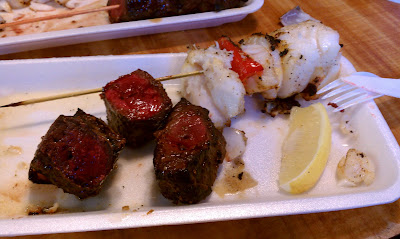 While in my trip, I had plenty of delicious food, I didn't partake in much of the exotic fare. I avoided hakarl, the Fear Factor-esque fermented shark that is described as licking a urinal. I also didn't have reindeer or puffin, which I hear tastes very fishy. I did however, eat a whale kebab. Iceland and Japan are two of the few countries that still whale. They are also two countries where you can find whale on the menu. The texture is easy to describe--tough, like an overcooked steak. The taste is much odder. Imagine a cross between tuna and beef, or if a cow was only fed a diet of fish. Whale is one of those things you can say you've tried, but you're not likely to go back.

Saegrefinn (Sea Baron)
354-553-1500
Geirsgata 9, 101 Reykjavik
The restaurant is located in the Northwest of Reykjavik by the harbor.