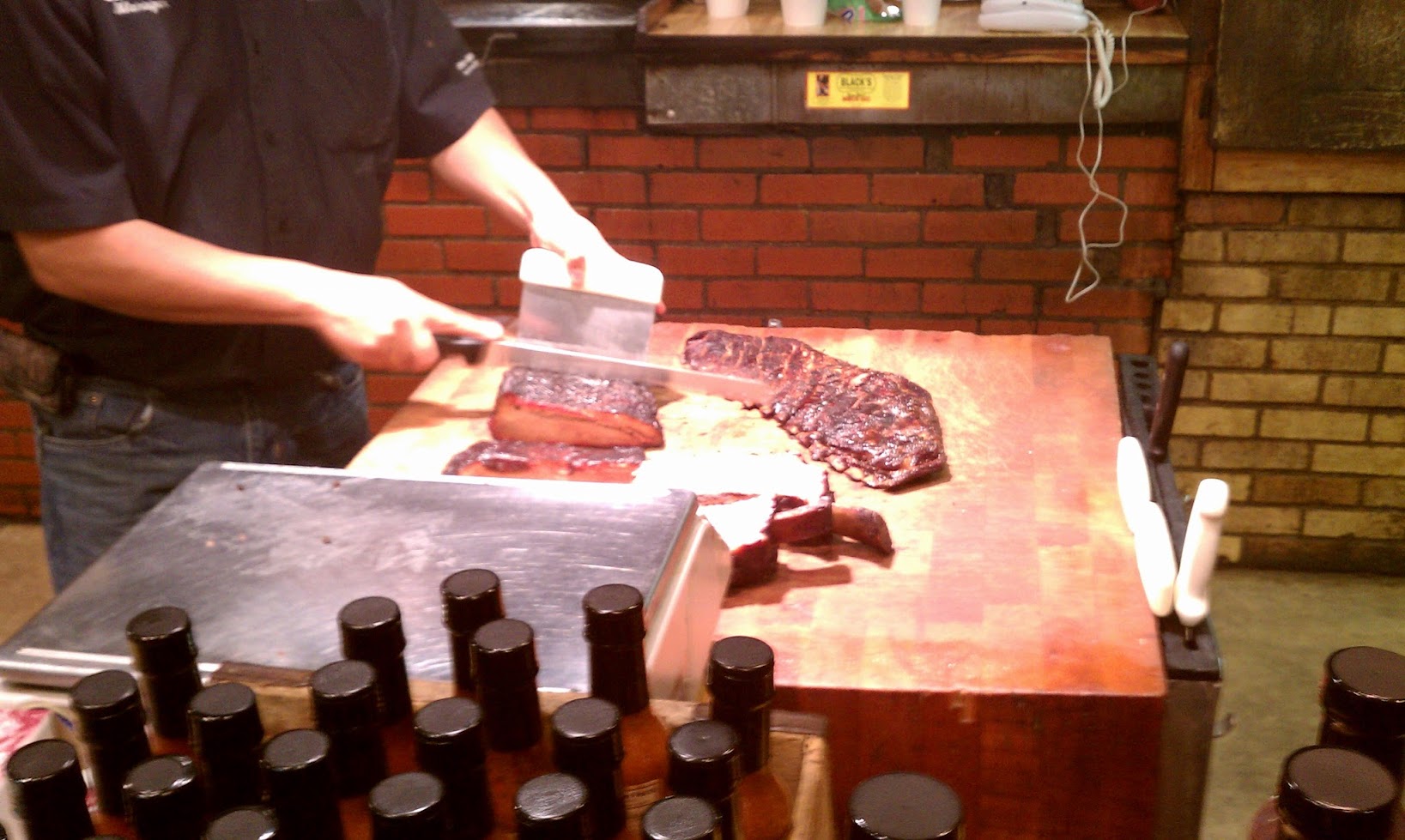 Served a beef rib and brisket at Black's Barbecue


As I mentioned before, Austin is not what I, as a California native and now a New York elitist, expected of the Texas experience. There were no big hats, pick-ups, rodeos or Southern drawls. Having lived in Austin for almost two years, my buddy with whom I was staying had never taken the Texas sojourn to The Alamo that is the prerogative of every red-blooded resident. Thus was born a day trip down to the tourist trap that is San Antonio. On our way, we would stop by the one Texas experience I couldn't leave without--Texas barbecue.

Lockhart is about a ninety minute drive south of Austin. Known as "The Barbecue Capital of Texas," this tiny town of twelve-thousand residents hosts three of the most renowned barbecue joints in the state. Speaking with several native Texans, each had flattering things to say about the town and its most famous landmarks. Yet, no two people I asked could agree on the best of the Big Three restaurants--Kreuz Market, Black's Barbecue, or Smitty's Market. After lengthy deliberation, and it was an arduous decision, I came to the epiphany that the sky's the limit...even if my stomach wasn't so limitless. We must try all three.

To actually arrive at some sort of subjective opinion on the barbecue, we couldn't go in without a game plan. Since beef brisket is king in Texas barbecue, we decided to order that at each place as a control. And if given a choice, we would choose the fatty brisket over the lean. At the very least, we could compare the brisket for all three. Yet it would be palate-deadeningly boring to order the exact same thing at each place. Thus we would pick a variable meat at random as well. 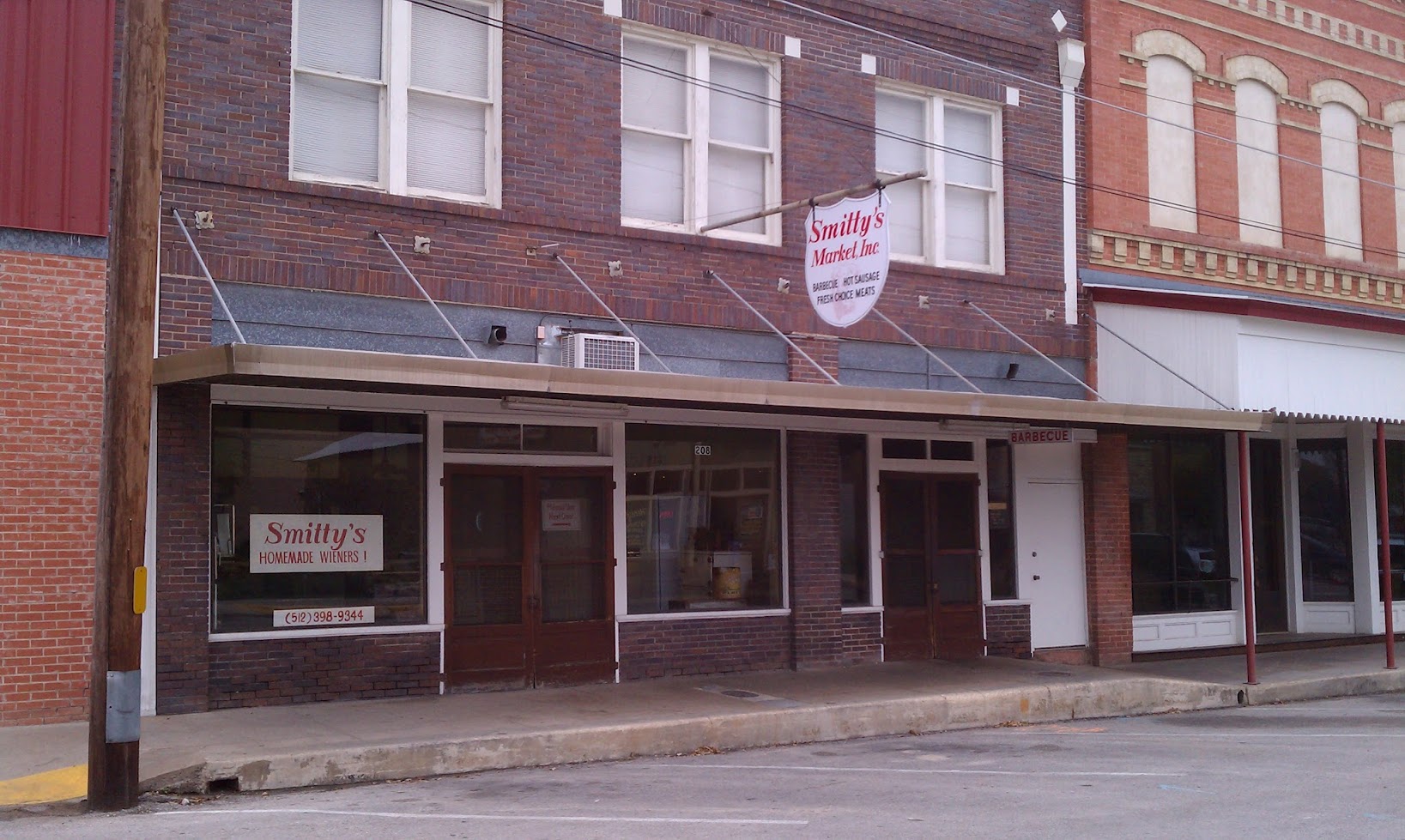 First place open in town was Smitty's Market. Given the small area of Lockhart, each restaurant was easy to find and within such close proximity, the scent of the smoke from one may be detectable in another. We were one of the first customers as we encountered most of the employees still winding up for the day. You enter through a hallway black with years of soot. In the back are two sets of barbecue smokers (pictured below). Order at the counter and the friendly workers pull out slabs of meat to be carved up and served on butcher paper. I had seen this service style at Hill County Barbecue back in New York, but it was reassuring to see that it deviated little from the Texas roots. Once you order at the meat station, you grab your fragrant bundle and bring it back to the brightly lit dining room where you can order drinks and sides. 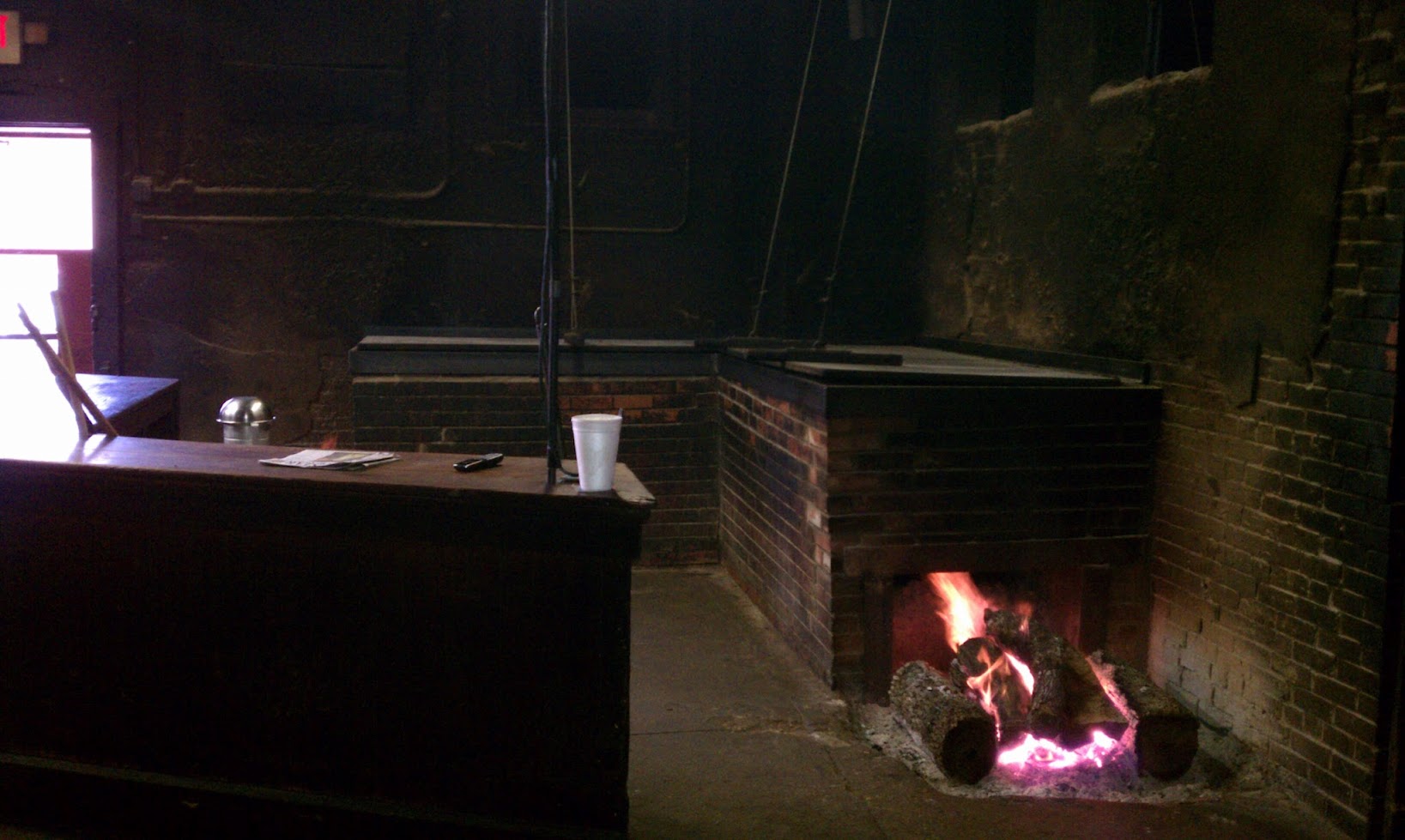 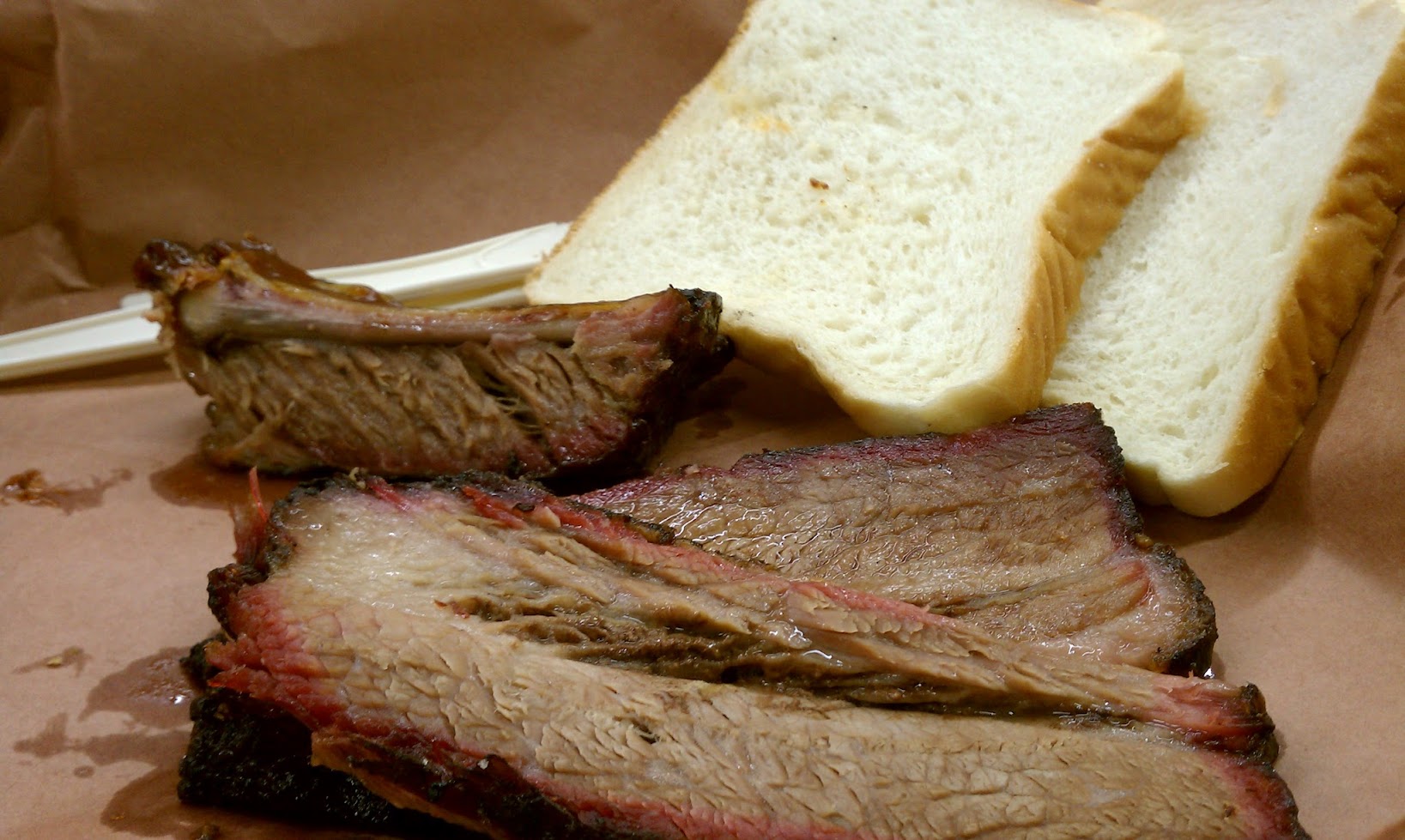 At Smitty's, we opted for the pork rib as the variable. Keep in mind that this beautiful, slow-cooked meat was the first thing either of us ate that morning. My first impression with the brisket was that it wasn't quite as fork-tender as I had expected from reading reviews. It still had some solidity to it that required either a knife or a firm bite. Don't bother asking for a fork; they'll give you plastic knives but barbecue is a hands-on event. The meat was so extremely flavorful that I appreciated the extra time I had to savor as I chewed through each bite. A crispy outer layer with a moistly glistening center, this brisket was top notch. The firmness of the brisket was in sharp contrast to the fall-off-the-bone tenderness of the pork rib. To be honest, I could hardly control myself and soon found myself sucking on the bone eager for more. Were these the best baby back ribs I've ever had? I would need more to tell you for sure, but having eaten it so quickly that I have little recollection may be some indication.

Smitty's also offered something Kreuz and Black's did not--barbecue sauce. Lockhart is part of the Central Texas barbecue tradition, one marked by spicy dry rubs and indirect wood smoke cooking. As such, the focus is on the quality of the meat and the zealously guarded secret rub and sauce, if served, is usually as a minor component for dipping. Smitty's did have a tangy tomato-based sauce, or what you might think of as "barbecue sauce." Kreuz and Black's had sauces too, but they were more hot sauces that lacked the sweetness of Smitty's. So if sauce is your thing, make sure to ask for it at Smitty's. 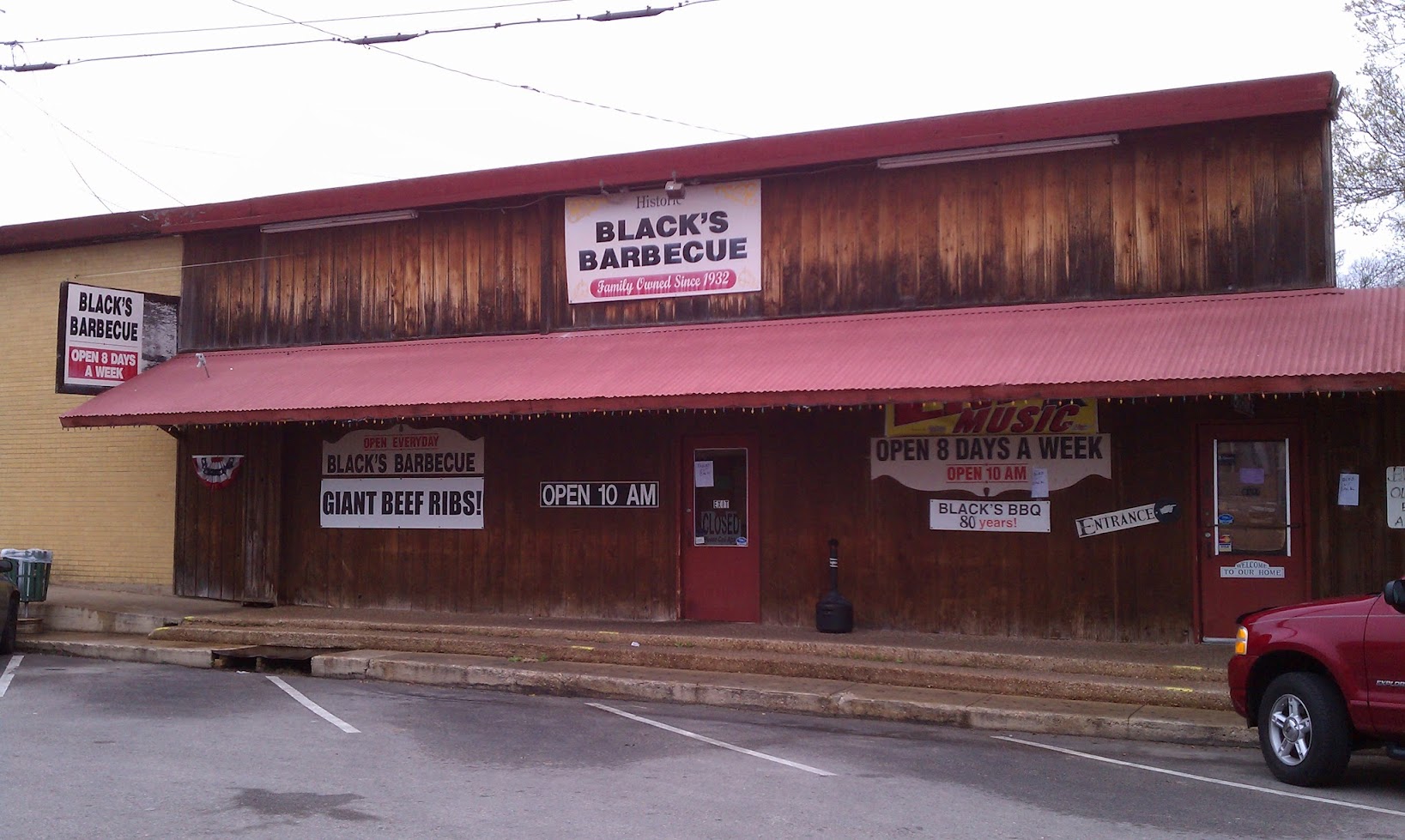 Of the three meaty stalwarts of Lockhart, Black's has seemingly engaged in the most marketing. Around town, and even from the highway, you'll see various signs directing you to the "famous" Black's Barbecue. Although all three restaurants sell t-shirts, Black's was fully engaged in the merchandising business. And while Kreuz and Smitty's seemed to adopt a no frills approach to interior decorating, Black's strives to give you the tourist's Texas experience. 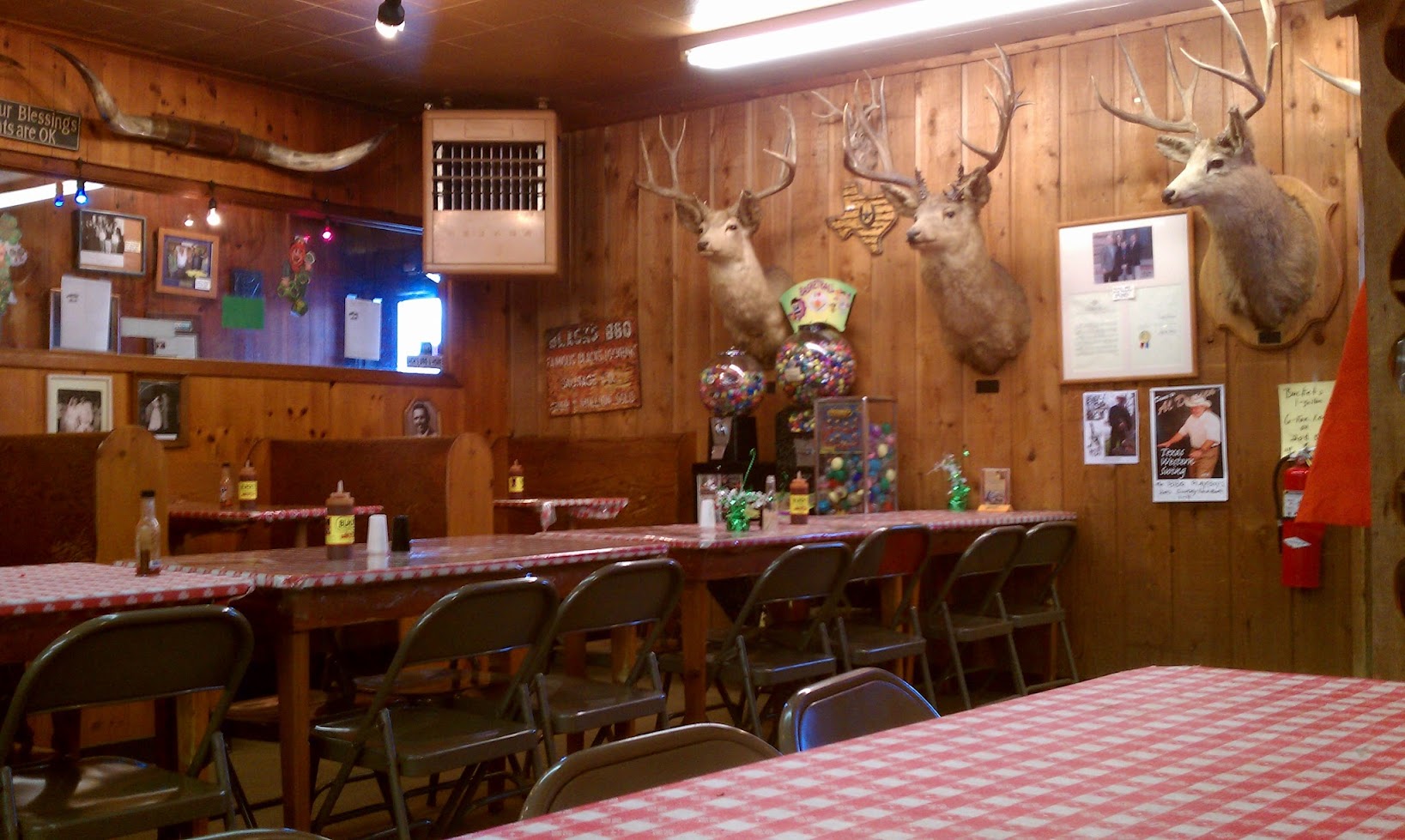 Black's has a streamlined design. Unlike Kreuz or Smitty's there is a single line leading past a steam table of side dishes to the barbecue counter before depositing you in the dining room. The barbecue section is not as accessible, which gave the restaurant a more sanitized feel. For a cuisine that is best eaten with your fingers and a bib, the cleanliness was actually a bit incongruous. 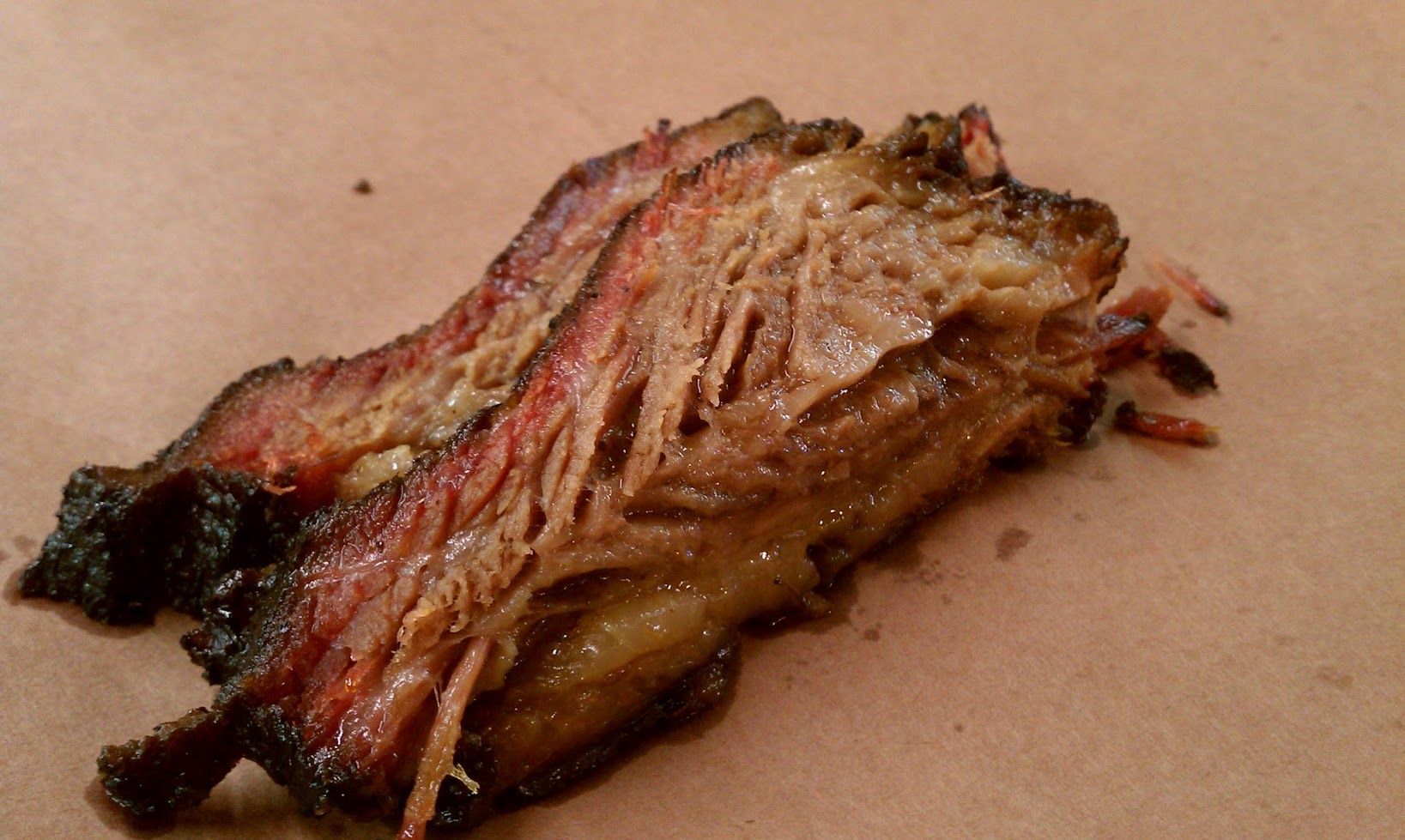 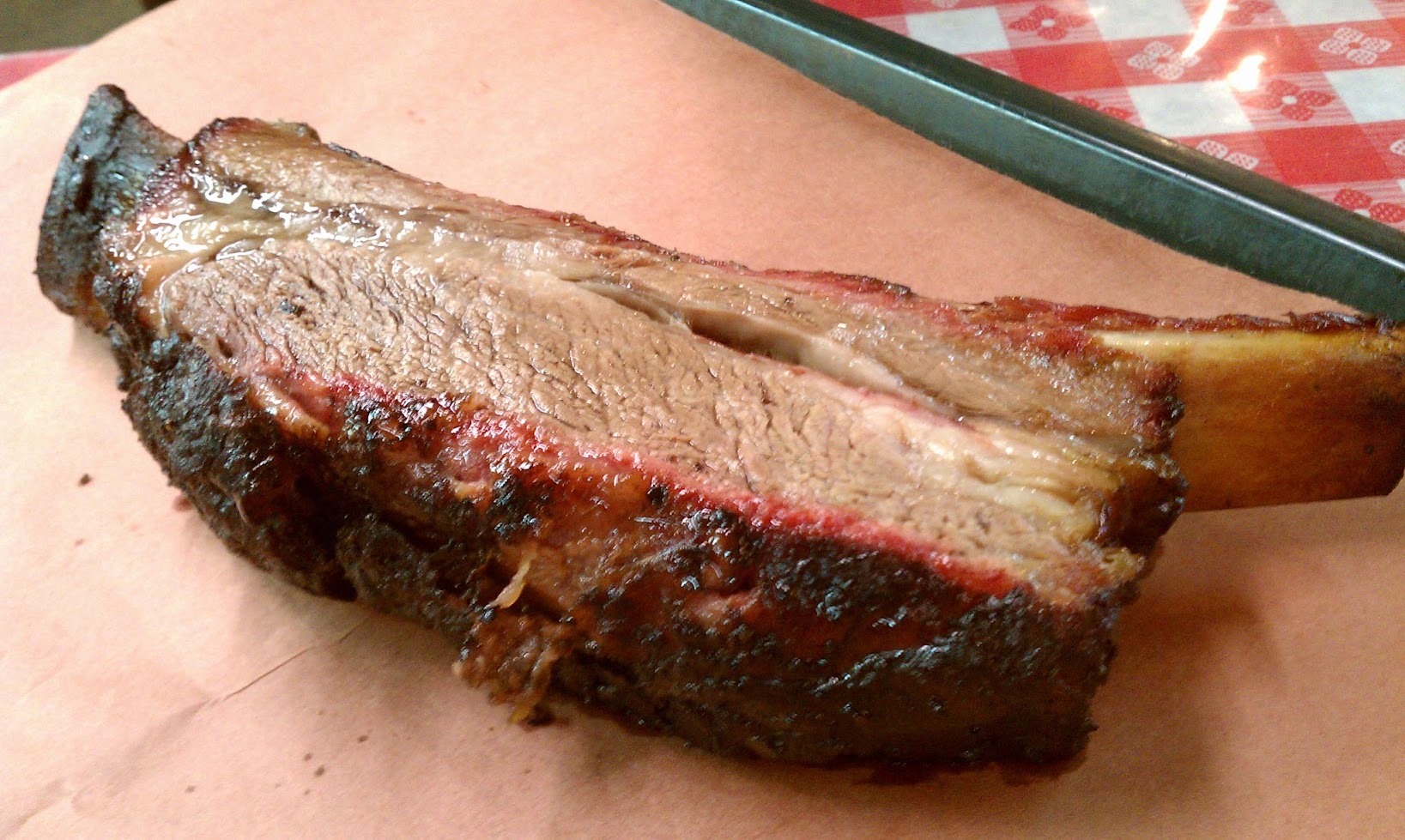 We ordered the fatty brisket and a beef rib. While most of the barbecue items are sold by the pound, the beef ribs are sold individually. We realized why when we received this twelve-inch wide monstrosity. Each rib is about a pound anyway. The brisket here was actually far too fatty. As you can see in the first picture, we received the end cut, one especially streaked with fat and gristle. Yet this was the tenderness I initially expected of the Smitty's brisket. It easily fell apart in my fingers. By the time we turned to the beef rib, we each had about a half pound of meat before 11 am. Neither of us were really up to the task, but we tackled that Brontosaurus rib and discovered the smokey flavor that comes in two stages. First, a hearty whiff of char, followed by lip-smacking umami. Eating a gigantic rib like this is a primal exercise that brings you closer to the essence of meat. 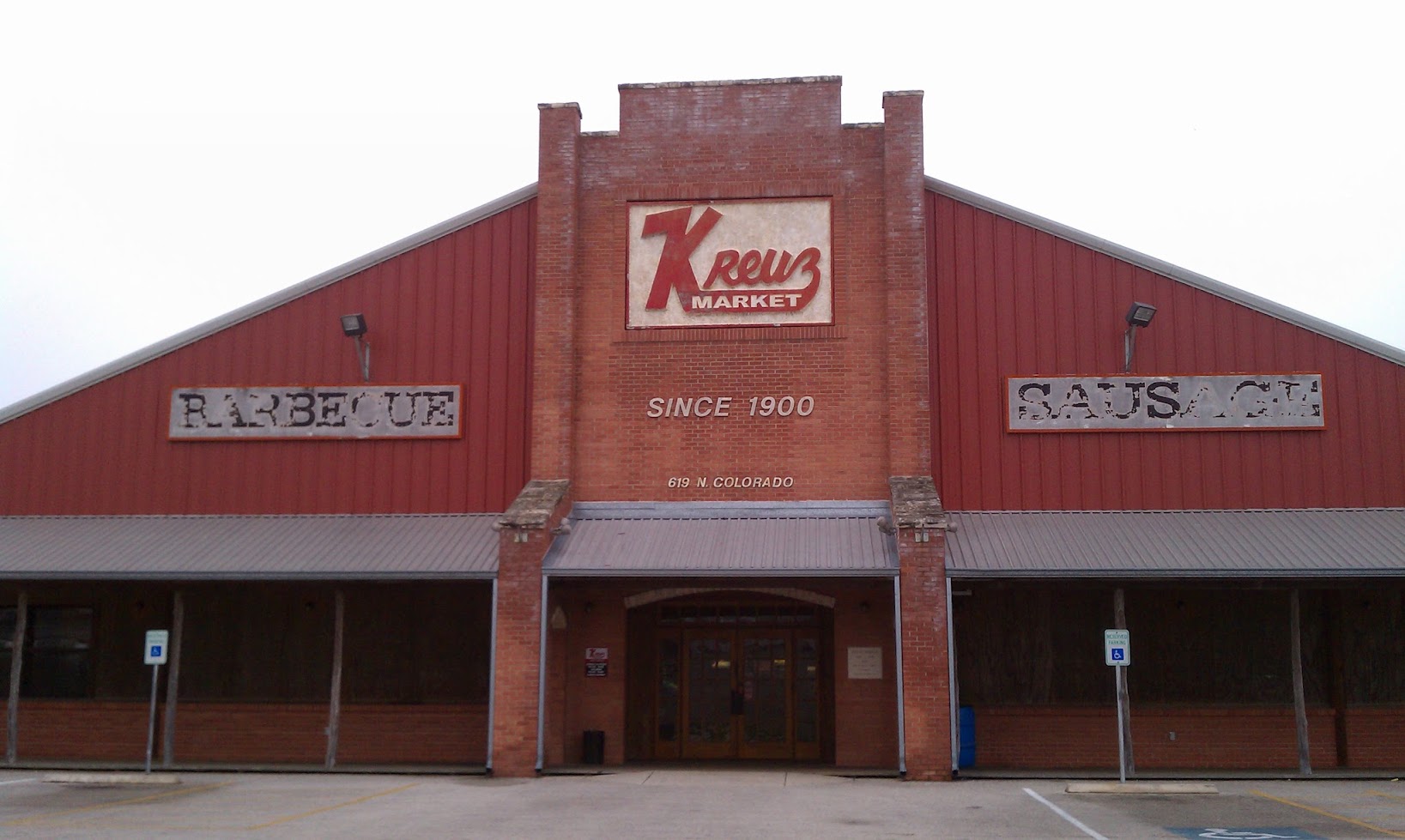 Unlike Black's and Smitty's, which are both in the town center of Lockhart, Kreuz is actually a solitary structure right off the 183 highway. The massive barn, parking lot, and outdoor storage of hardwood betrayed a bigger operation than its rivals. The restaurant's interior seemed relatively modern, not cluttered like Black's or rustic like Smitty's. Helpful older women take your order near the barbecue pits just like at Smitty's and you bring your butcher paper wrapped tray to the dining room for sides and drinks. 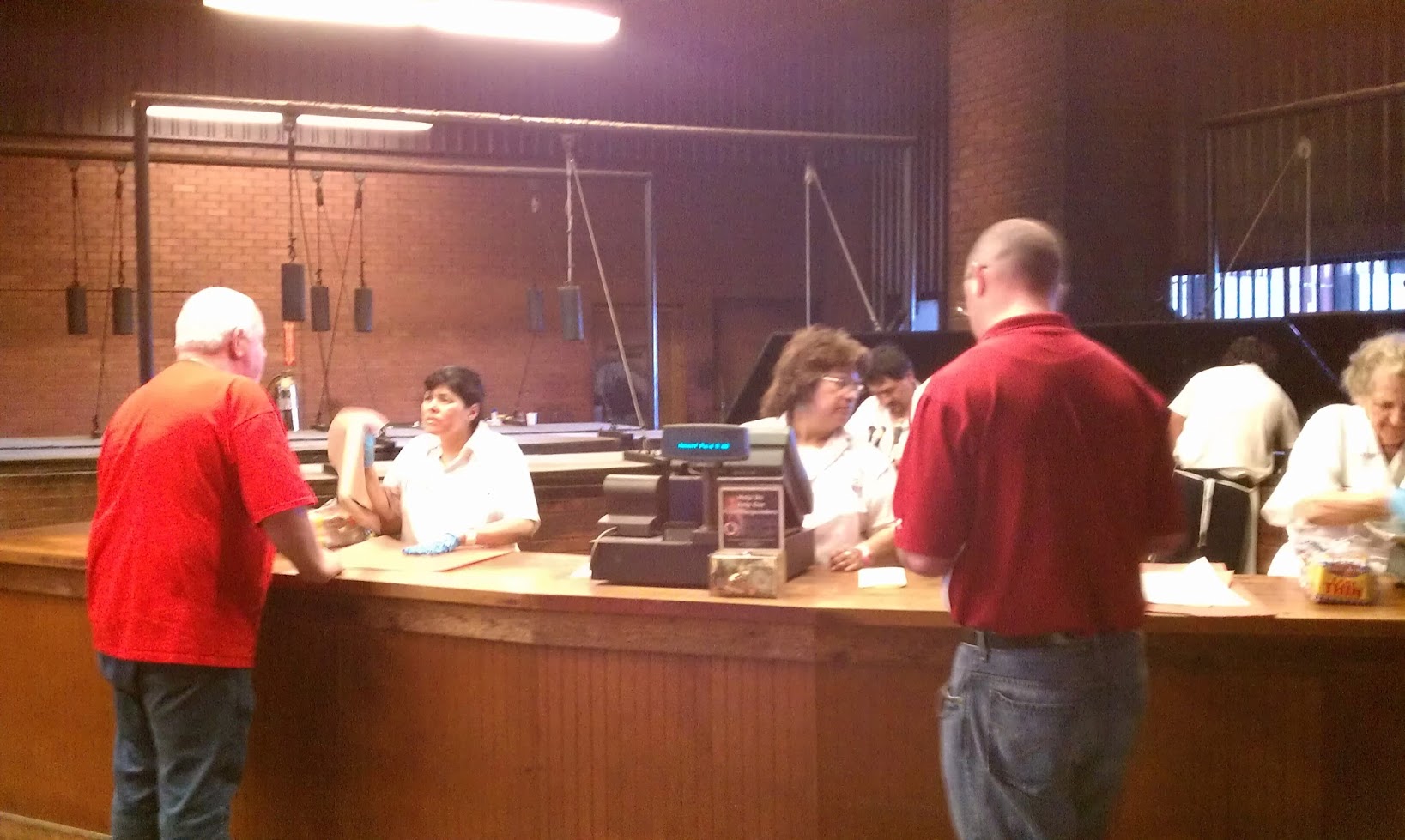 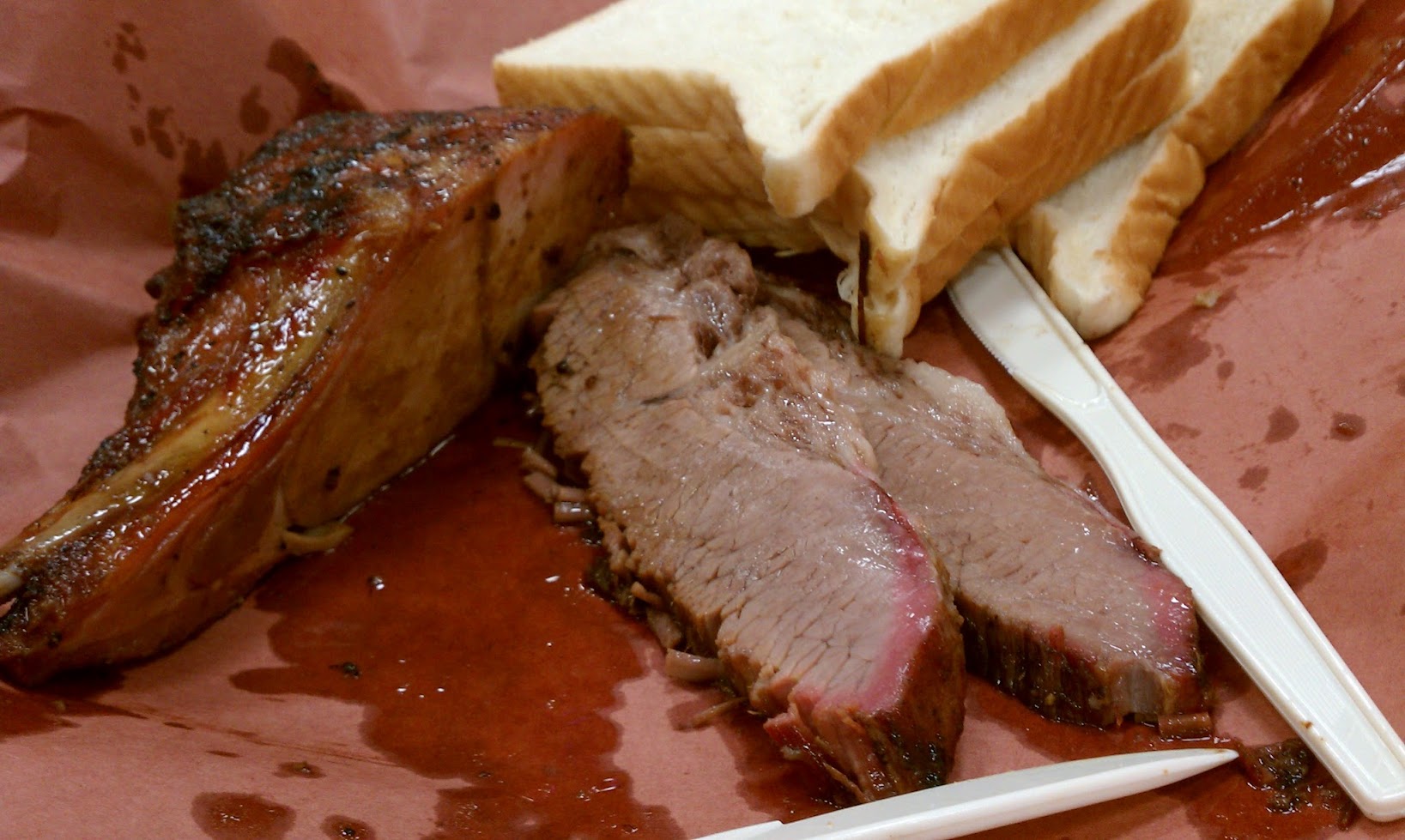 At our last stop, we ordered brisket and a pork chop. The brisket here was the leanest, even though we had specified for a fatty cut. The main flavor profile was salty without too much complexity or depth. I enjoyed the crust of the pork chop, though the center was a bit dry and could've used a good sauce. Both cuts of meat had a proper smokiness that indicates a long, indirect cooking process--key in Central Texas barbecue.

What is the best brisket in Lockhart? Both my friend and my number one choice is Smitty's. The brisket there had the most astounding, stop-you-dead-in-your-tracks flavor and just the right amount of bite. Dipped (optionally, of course) in the tasty sauce, your best bet for beef is at Smitty's. Additionally, we gave high marks to the pork ribs here and the beef rib at Black's. But why does it matter which one is the best? If you're going to be in Lockhart, you're obligated to try all three as well. Keep in mind that even the worst barbecue in town is miles beyond anything you'd find in New York or California. I am not going to get into the barbecue rivalries of the Southern states, but Texas has a lock on brisket so make sure that's on your plate.


Good day! I was so impressed to see a very well-presented dishes that is absolutely tasty and delicious. You've done a great job.Well, thank you for sharing your talent and article it is very well appreciated. You can also visit my site if you have time.

Life is a battle, if you don't know how to defend yourself then you'll end up being a loser. So, better take any challenges as your stepping stone to become a better person. Have fun, explore and make a lot of memories.