Into the Darkness: Jungle Food Marathon

In the vein of Neil from Food Marathon and Joseph Conrad, nine hardy adventurers took to the concrete jungle of Los Angeles in search of victuals. One day, five stops, four meals, this isn't just a food marathon, it's the Jungle Food Marathon. Fitting with this blog's name, here are five jungle dining destinations along the coast of Los Angeles.

At the Ford's Secret Pork dinner, Matt of Mattatouille let me in on the upcoming marathon he was planning. This would be my first, something I've been wanting to do for some time. Going with a large group to multiple restaurants in one day would be a great way to experience a multitude of cuisines. During the drive, there was quite a bit of driving, I found a real appreciation for Los Angeles' diversity of cuisines and cultures. As Neil pointed out, we were probably the first people in history to eat Nigerian, Peruvian, Cambodian and Vietnamese food in the same day. I picked up Fiona of Gourmet Pigs in the morning, met up with HC the LA OC Foodie, Javier the Teenage Glutster, Matt of Dig Lounge, Christine and my brother. We hopped in three cars and sped down the 405 for our first stop. 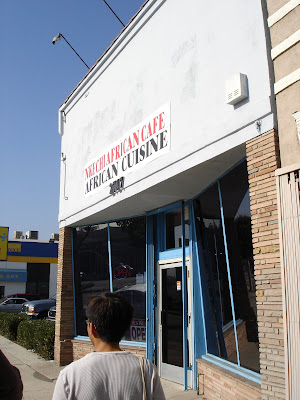 A minor detour took us to Nkechi African Cafe since Saaris was closed. Luckily, Nkechi also served Nigerian cuisine. Personally, I had to be sure that there were jungles in Nigeria before I could count this as a Jungle Marathon stop. Also, I'm sure it would offend someone to just categorize all African cuisine as jungle food. We strolled into the empty restaurant manned by one friendly waiter/cook/everything. We split a bottle of palm wine/juice between the nine of us, since none of us really wanted to drink too early in the day. Also, the beverage tasted somewhat nutty, sour and wheaty, not all that delicious. The first dish of the marathon was jollof rice topped with "mixed meat." It was a rice dish flavored with tomato paste, a few spices, and various fried meats. I may have had a piece of beef. Yes, I'm going to go with beef. The egusi soup was reminiscent of curry in color and slightly in texture. According to Wikipedia, egusi is made with ground melon seeds. On the side was a mound of sticky white yams with the consistency of glue. It made eating with my hands a mess. There were some odd flavors, but nothing too off-putting, unlike the last dish at Nkechi. Oh ogbono soup describable best by Conrad himself: "the horror!" I can easily say that ogbono soup, made from African mango nuts, was the worst thing I've ever put in my mouth, food or otherwise. The smell you get when you brake hard on the freeway, imagine eating those tires cooked with fish topped with a nauseating bleu cheese scent. I gave it a shot, I even tried it a second time. I tried it with and without the eba cassava paste still no luck. For our group of adventurous eaters, this dish will forever be off-limits. 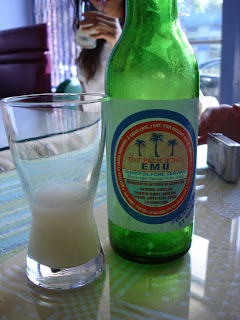 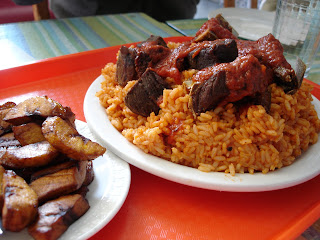 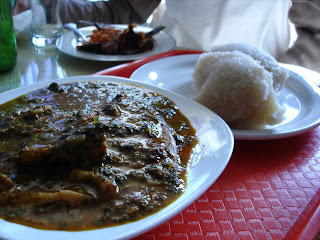 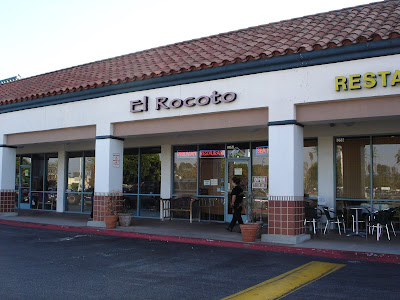 We unanimously agreed that Nigerian food first was a wise choice. If that had been our last stop, we would've been in for a tough time. But since most of the food wasn't particularly palatable, we had plenty of room for the next place--El Rocoto in Gardena. Seeing as how I just returned from Peru a few months ago, refer to my Destination Peru series on the bottom left, I wasn't thrilled to include Peru in the marathon. But I knew firsthand that Peruvian cuisine was delicious, so I didn't mind making this stop at all. The ceviche mixto, while not as magnificent as the one I had in Lima, still had all the right components. The tart lime juice balanced out the brine of the whitefish, shrimp and squid. Raw red onions cut through the other flavors. The seco de cordero, lamb cilantro stew, had all the deep, hearty flavors of a mature animal. I love the flavor of lamb, and especially in a stew like this, the natural gaminess of the meat must come through. I'm always disappointed when the lamb tastes indistinguishable from beef, no matter how tender. I noticed that lamb and cilantro is also a common combination in Chinese cooking; I wonder if there was some Chinese influence for this dish or if those ingredients just naturally go so well together. I'm not a fan of tripe, so I didn't like the cau cau tripe casserole, though I know it is a common Peruvian dish. Our pollo enrollado and saltado de mariscos had similar flavors due to the liberal use of oyster sauce. Peru's got its share of decent Chinese food and these two were no exception. A special mention goes out to the aji rojo and aji verde made with jalepeños and the green sauce with mayonnaise. Both were amazing on top of bread, on top of everything really. 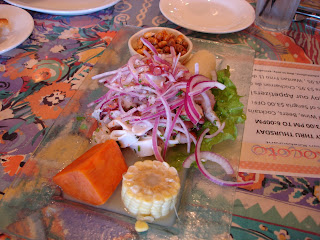 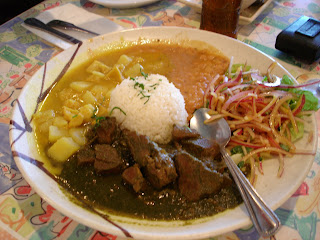 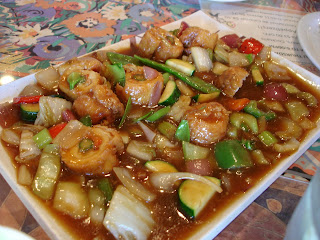 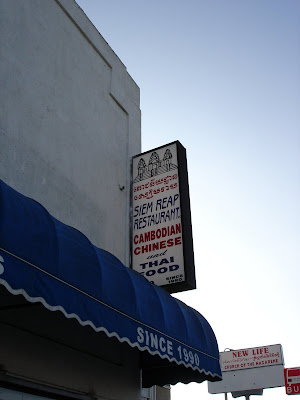 Rolling off Peruvian, we headed to Long Beach where apparently a sizable Cambodian population lives. Our destination was Siem Reap, a self-proclaimed "world famous" restaurant. I don't know if it's just a coincidence, but the old Cambodian restaurant in my hometown also had a dance floor and karaoke like this place. It seems as if many Cambodian restaurants double as banquet halls for your Cambodian wedding or drunken Dhoom Dhoom sing-along. The fish salad with bitter sadao leaves tasted exactly as named, fishy and bitter. The leaves were crumbled and impossible to remove, so I assume they are critical for the salad's integrity. Our lok lak came in beef, not the deer we had hoped to try. Although it was served with lemon juice, salt and pepper, the beef cubes had enough flavor themselves without the sauce. The hot and sour fish soup had familiar Chinese and Filipino flavors. It tasted like a cross between some of the Chinese vegetable soups I've had at home and Filipino sinigang. The French style tender beef and anchovy salad displayed some French influences, similar to Vietnamese cuisine and had Cambodian olives. The fish paste wasn't thick enough; it smelled like feet, and didn't taste much better. I liked the ground pork curry the most. Though it appeared thin, it had an amazing amount of depth in flavor similar to Thai curries. As a group, we had a minor mix-up with a durian and jackfruit shake the included a moment when everyone thought they overcame durian's rancidity and became spiky, smelly, fruit lovers. 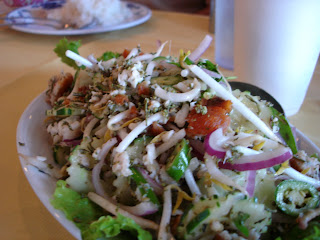 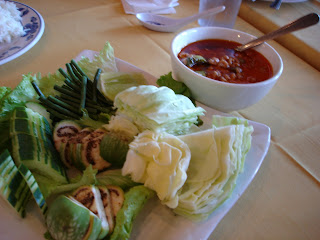 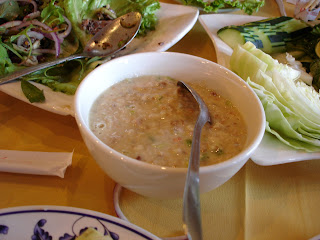 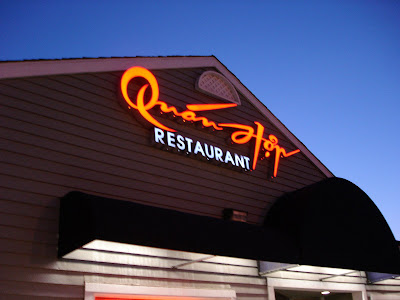 By now, the sun was setting over our last meal stop, Quan Hop, an upscale Vietnamese restaurant in Little Saigon. Usually, my Vietnamese food is pho and banh mi, nothing more than $6-7. Quan Hop is a different experience--clean, comfortable and relatively expensive. In a market like Westminster and Garden Grove, they occupy a sweet niche of "high-end" dining. Matt and Christine had been here before, so they offered their recommendations, including the banh beo rice cakes and banh it ram potstickers. Though the banh it ram was listed as potstickers on the menu, they were much odder, consisting of a fried ball and topped with rice paste. They were delicious none the less. The banh beo reminded me of Chinese rice noodles served at dim sum with slightly sweet soy sauce. Encouraged by the jackfruit shake at Siem Reap, we ordered a jackfruit salad. This was my first experience with banh hoi thit nuong, thinly sliced sheets of vermicelli noodles with grilled pork. The flavors were familiar Vietnamese, but I've never seen this presentation. We finished with goi cuon nem lui shrimp paste spring rolls. 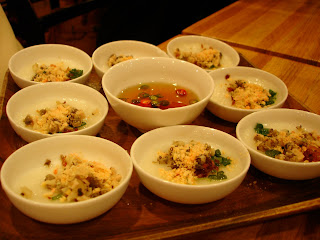 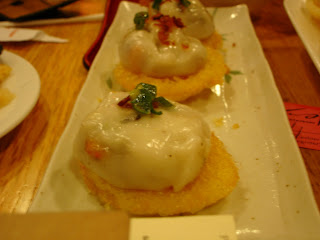 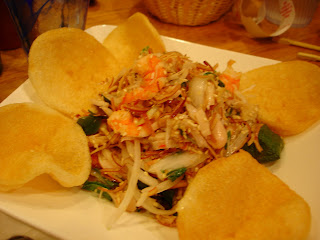 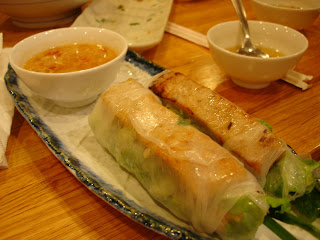 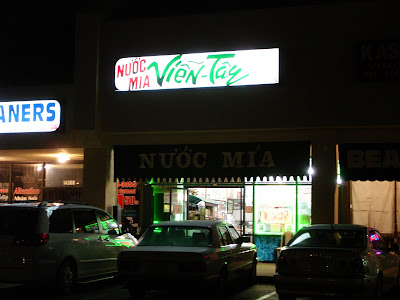 Filled with food, we needed something refreshing and sweet. It wasn't the quantity of food that bothered me; we had just been eating for six hours. When your stomach's been digesting for so long, your entire body get exhausted. We drove a few blocks down to Nuoc Mia Vien Tay market for freshly squeezed sugarcane juice with kumquats. It tasted too sweet for me, but had a pleasant tangerine flavor.

Driving back from such a long day of eating, I was more spiritually satisfied than bodily. Some of the food had been above par, but many others weren't too appetizing. That didn't deter me though, the adventure had been well worth it. I came back out of the jungle a little more worldly, and a lot more full.

Hurumph, and why wasn't I invited!

It looks like you all had a blast with delicious food. I can't believe you took all that on after Thanksgiving.

Hopefully I'll be invited (nudge nudge) by a friend at another marathon in the future.

Sorry Mike, I'll let you know if we do a chicken wing or South Bay Japanese marathon in the future!

great write up! very extensive and detailed, but readable and informative. I think your viewpoint at the end was spot on, a lot of the food was just okay, but some dishes were good. Because we couldn't really gorge at one place it was hard to feel fully satiated. Great having you there Aaron, and we should plan those other two marathons soon (prob early 2009 is best for most people)

I love, LOVE, the youtube link to Dhoom Dhoom you included in there! :P

Thanks for being the early bird on this one, used your notes to fill in the blanks on my post. But I can't believe I forgot to include a link to Dhoom Dhoom! Kudos on that one!

Ah it seems that the consensus is that Dhoom Dhoom be the official theme song for the Jungle Marathon.

Well, I'd vote for that girl-pop song before the "Dhoom Dhoom" one but would have no way figuring what that is, short of re-visitng Siem Reap and harassing the waitstaff to play and ID from that karaoke vid.