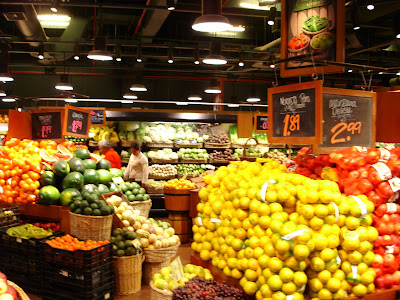 As mentioned in my last post, Peru is home to a huge amount of biodiversity. What this means for me is a huge amount of things to eat. The above picture was taken at Vivanda, an upscale Whole Foods type market in Miraflores. Although many of the fruits and vegetables are recognizable as global staples, there are many that you don't see here unless in specialty markets.

For one thing, I was amazed at the varieties of heirloom tomatoes that have grown in popularity recently, but the number of those tomatoes are a paltry number compared to the over 3,000 varieties of domesticated potatoes in Peru. During my time there, I only had perhaps 5-6 that were consistently used in dishes, each with distinctly different flavors and textures. A potato can be intensely earthy, while its counterpart could be almost ethereal. One can be mealy and the other creamy. I suppose you can accomplish some of these different textures due to cooking method, but the differences in flavor are not so easily replicated.

Besides potatoes, there were also different types of corn, although not to the same degree. A constant staple was the large kernel corn you can see in my short ribs in the previous post. Below is a picture of a man selling boiled corn on the street. It was quite a common site actually, though typically with an Andean woman. My first impression upon seeing the giant kernel, each about 3-4 times larger than regular corn, was that it must be a large ear. Instead, I soon realized that the ears were the same size, but the kernels were just disproportionately large. I was also disappointed when eating it. There was no crunch, no satisfying snap to the corn. Each kernel was chewy and soft. In fact, it has almost no discernible flavor. I suppose I might be spoiled by the ultra-sweet GMO white corn here, but if this is what corn originally tasted like, then I would rather make a tortilla out of it instead. I think you would lose the pleasure of having a tasty corn on the cob treat. 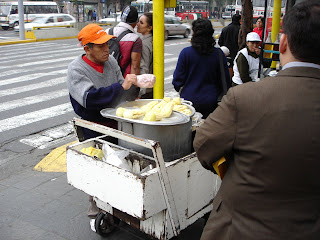 Also, Peru has a purple corn most prominent as a drink chicha morada. The corn is boiled in water, turning the liquid the signature purple, and then pinapple and sugar are added as it cools. We bought a bottle at Vivanda, but it wasn't very good. It tasted artificial, and looking at the bottle I wouldn't be surprised if it was. It was much too sweet, but had an aftertaste of corn. I didn't see anyone eating the purple corn raw, but sometimes in a cooked state as a complement to a dish. 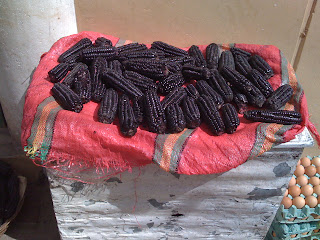 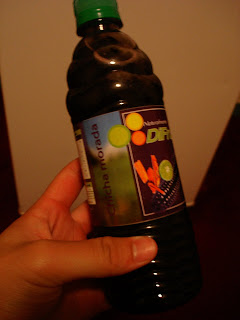 Every morning we had a complimentary breakfast served by the various hotels. In each hotel, there was always fresh squeezed papaya, pineapple and orange juice. Every fruit I ate was deliciously sweet, no "bad apples", not that I actually ate any apples. The plate below is a typical breakfast fruit platter I would make of kiwis, watermelon, papaya and an unidentified fruit in the top left. Those three pieces were sweet and a little mushy, but the seeds were round and extremely hard. If anyone can identify them, please comment below. My family also had many of the passionfruits in Peru. Considering how expensive they are in the States, it was a pleasure having them so cheaply we could eat them until we got sick of them. In the second picture, we bought a mandarin orange on the bottom right and three different types of passionfruit. 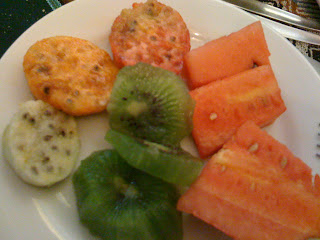 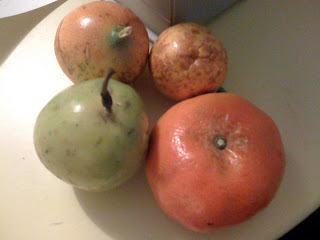 Of course I can't leave out meat. Commonly, there is the pork, chicken and beef that we all know and love. It is the alpaca and guinea pig that we don't see often. Strangely enough, I've heard that alpaca are illegal to slaughter for food, which makes me wonder where the meat comes from. Since I am much more a carnivore than anything else, I will go into these when I mention the restaurants that served them to me. But here's a picture of a typical meat market in Lima near Barrio Chino (Chinatown). 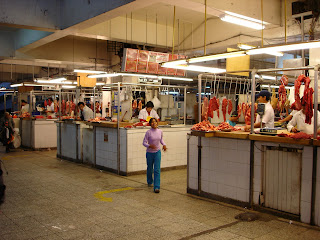 Sorry for the dearth of non-meal related pictures. Believe it or not, I'm still using a 256 mb memory stick on my camera. It wasn't until meticulously documenting this trip that space became a problem.
Posted by Aaron at 8:47 AM

Your mystery fruit is called Tuna, which obviously doesnt refer to the fish in spanish. The fruit is extremely common all over Peru.

In english the common name is prickly pear. The scientific name is opuntia ficus-indica: the plant that generates the fruit is a prickly cactus.

Ah yes, I remembered seeing Tuna listed at several places. I thought it would be out of place if it was referring to the fish. Thanks for the ID. Is that what Baloo sings about in Bare Necessities?