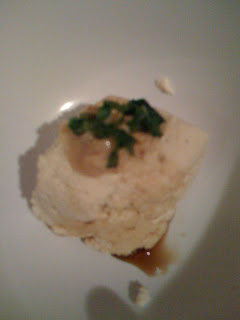 Bad photo for equally bad tofu
I just returned from an amazing tour through the Andes by way of Peru, but before I regale you with my adventures with Peruvian cuisine, I have backlogged pictures from my experiment with tofu.

The day before my trip, Michelle asked if I wanted to try to make tofu. While I've never been a fan of bean curd, I thought it would be a worthwhile experience. The bland, jiggly block had been my culinary bane as a kid, and even as an adult I have yet to develop a real love for it. At the very least, I'd have something to share with all of my (1 or 2) readers.

Of course neither of us had any idea what to do, so we consulted the knowledge base of our generation--Google. Since the information is readily available, and my own experiment sort of failed, I will not post a recipe. There is a very informative and oddly calming video recipe here, but I will just take your broadly through the steps and my experiences with them.

Borrowing some terminology from my favorite television personality Alton Brown, I will walk you through the difficulties of purchasing Japanese ingredients when you don't speak Japanese. Tofu is soy milk that has been curdled with the aid of a coagulant, generally magnesium chloride nigari in Japanese or calcium sulfate. We went to Mitsuwa, home of Santouka to purchase the dried soybeans (daizu) and nigari. There was no problem finding the soybeans, but the nigari created another challenge. In retrospect, I think we bought the wrong nigari, since the tofu turned out salty and didn't curdle without the addition of lemon juice. 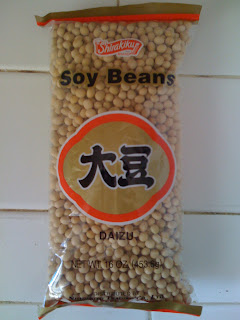 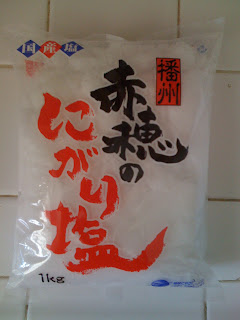 In addition, we needed cheesecloth to filter the soy milk. Believe it or not, I actually don't have cheesecloth. I know, what kind of chef am I. More unbelievable is how impossible it is to find anywhere that sells cheesecloth. Granted, I only looked in several drug stores, groceries, hardware stores and art supply stores. Perhaps it exists in an actual restaurant supply store. Finally, we settled on using nylon pantyhose as filters which actually worked extraordinarily well. All we needed was a fine mesh, and pantyhose fit the bill. 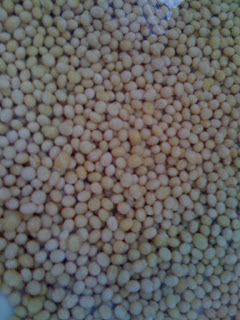 Exactly what it sounds like. I poured the soybeans into a plastic tub, picked out any rocks and covered it with cold water. I left it out on the counter top, but due to some scheduling issues, ended up soaking it for more than the recommended 6-10 hours. My soybeans were submerged for more than 24. I heard that oversoaking leeches out too much flavor from the beans, so we used some of the soaking water when blending the beans. 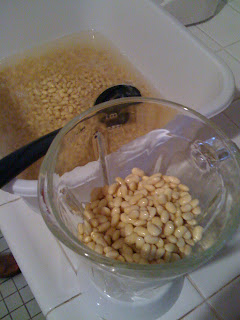 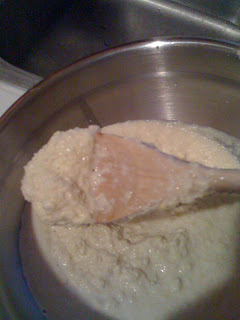 I used a blender because my food processor capacity is too small. The food processor would have blended the beans more evenly and I think I burned out my blender motor doing this, but the end result was a thick bean paste that we spooned out into a mixing bowl.

Step 4: Heat up the soy paste and strain 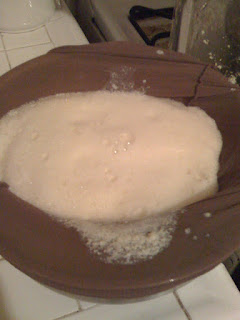 This was definitely the most painful and labor intensive step of the entire process. Pouring the mixture into my gigantic 10-quart stock pot, we heated it up to 165 degrees, the optimal temperature for making soy milk. Pouring the hot gloop into the nylon and squeezing the milk out of it scalded my hands. But the resulting milk was delicious. With a dash of sugar, the soy milk bested all the ones available commercially. The remaining solids (okara) can be used in other applications since it is nutritiously high in fiber, but I just tossed it out. It had no flavor after all, and one culinary experiment at a time was enough.

Step 5: Heat up the soy milk in a pot and add the coagulant 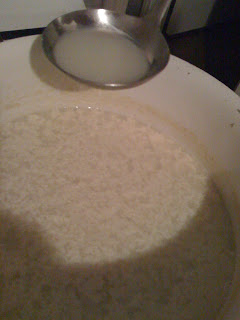 This is where we ran into our only major problem. The nigari salt did not coagulate the milk as expected. With a quick substitution of lemon juice, the curdles finally started appearing. But at this point, we had added excessive salt trying to coax the proteins of the milk to ball up. The result would be salty and lemon flavored tofu.

Step 6: Place the solids into a mold and apply weight 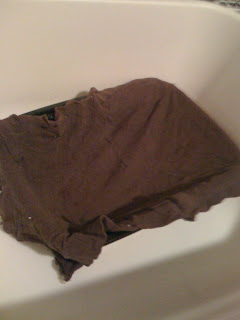 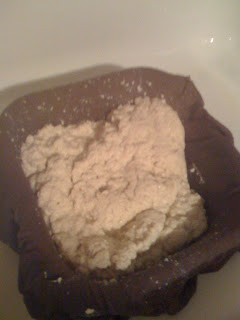 The mold can be as complicated as a perforated metal box or as simple as a milk carton. We opted to mutilate an old Tupperware container, allowing excess fluid to drain out the bottom. Folding over the nylons and placing a lid of aluminum foil, we weighed it down with a heavy bottle. The time it spends in the mold determines the firmness. We overshot the mark a little and came out with very meaty tofu. 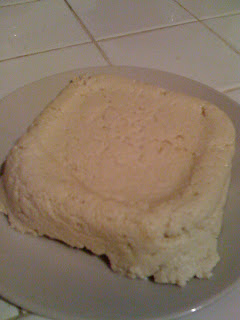 The end result? Meaty, salty and lemony. Not usually the adjectives you hear describing tofu, and I would say that the product was somewhat of a failure. However, the soy milk by-product was satisfying and delicious. I also learned enough about the process to vastly improve next time. Would there be a next time? That's a more difficult question. It was a fun experience, but I think next time I might just stop at the soy milk and enjoy it without the curdling and molds.

nice, i was saw ming tsai do a show on how to do homemade tofu. anyways, i'd like to try dog one day. maybe when i go to korea sometime this fall. how'd you find my blog? i'll RSS yours on my blogroll.

Interesting, but I agree with you and I'll probably pass also ...lol!