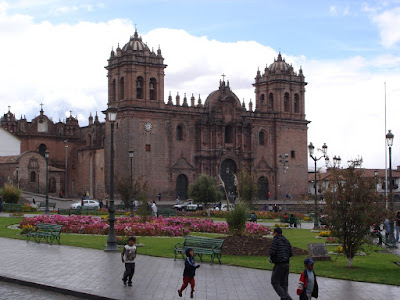 Cusco Cathedral
After our brief tour in Lima, we ventured up into the Andes en route to Machu Picchu. The town of Cusco was the capital of the Inca Empire at its peak, now its a major tourist stop. Around the main square, little shops and restaurants gave the scene the flavor of a quaint European village. The cathedral in the center of town had more bling than the last thirty gangsta rap videos I've seen. Gold and silver leafed altar pieces were stunning. I have to give it up to the Catholic Church, when they want to dazzle you, they do so in style. 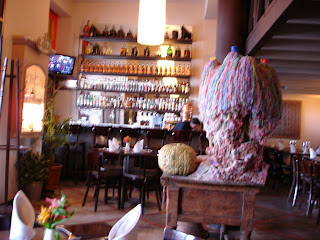 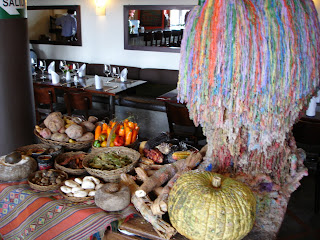 For lunch upon arrival, we went to Inka Grill, one of the restaurants on my Peru research list. The classy interior and experienced staff definitely took the restaurant out of the little town its in and placed it in a cosmopolitan city. Of course the prices also reflected that. During my trip, the exchange rate was roughly 3 soles per dollar. When my uncle went their before the Argentinian economy collapse, the exchange rate was one-to-one. At those prices, the country would not be any cheaper to visit than America. 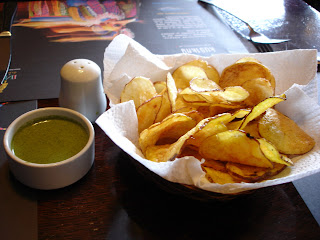 They served us some chips with spicy, minty cilantro dip to start with, but they weren't that good. In fact, they had been sitting out and were no longer crispy. I couldn't tell if the potatoes tasted any different. 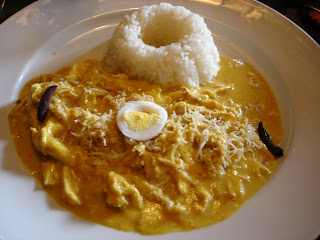 I ordered the aji de gallina because of its popularity as a Peruvian dish. It's a shredded, poached chicken in a creamy sauce with nuts, parmesan cheese and mirasol peppers. As a dish, it's hearty, but beyond that, the flavor was simple. I can imagine people eating something like this on a day-to-day basis. 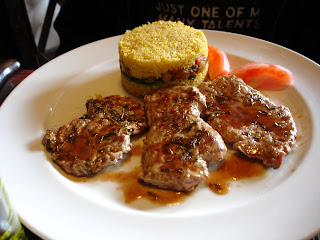 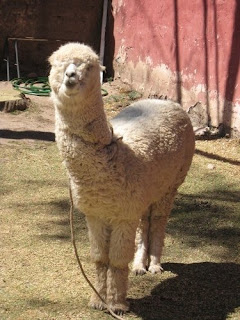 Of course I would've ordered the alpaca a lo tupac turin if my brother hadn't jumped on it first. This would be first of someone of the more exotic foods I'd be eating. Alpacas are so common in the Andes, although I suspect the people raising them tend to frequent tourist paths. They're dumb looking animals, but very docile and tame. Similar to llamas except they're not raised as pack animals since they're too small to carry anything. They're domesticated only for their wool. I bought several scarfs and sweaters made of alpaca and I'll admit that they are indeed soft and warm. Too bad their meat is not especially delicious. The tournedos were tender and slightly gamey, but nothing particularly memorable. I won't be disappointed if I can never eat alpaca again. 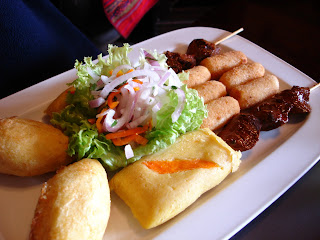 My mom decided to go broad and order the Inka Grill Sampler, which consisted of tamales, potato empanadas, anticucho and papas rellenas. Everything on that plate that looks yellowish is potato. In my opinion, it was overwhelming, but the different styles of preparations with presumably different types of potatoes had radically different textures. Anticucho was a dish I had heard much about and was eager to try. It is a skewered beef heart. Sounds tasty...or maybe a little sadistic. Either way, it was indeed chewy and beefy. There was a slight taste of organ meat, but it was mostly just an overwhelming sensation of beef. Did I say overwhelming? I meant just right. How could you be overwhelmed by beef? That would be silly.