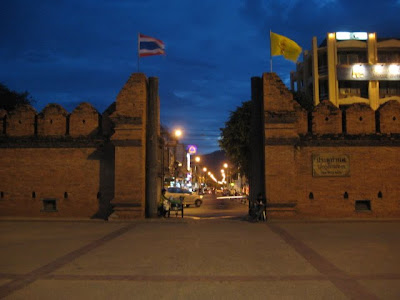 Eastern Gate to the Old City of Chiang Mai

My favorite Thai food I had in Thailand was a popular restaurant outside the imposing old city gates of Chiang Mai. Following the Lonely Planet guide to Thailand, my co-adventurers and I ventured from our lodging to the highly recommended Aroon Rai restaurant. 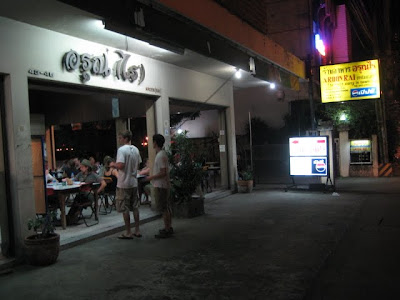 My buddies scoping out the place

Besides Quán Ăn Ngon in Saigon, Aroon Rai was my second favorite restaurant meal of the entire trip to Southeast Asia. Billed as the "best curry in town," the restaurant probably gets its fair share of foreign press. In fact, it sells packets of its secret curry mix for visitors to bring the flavors of Northern Thailand back home. Upon arrival, first thing I noticed was abundance of foreigners in the open air location. It looked like the restaurant had been vastly expanded, as the dining room opened into another building. Generally, I am a bit skeptical of local restaurants that have too many non-native faces, but so much of Thailand is tourist-centric, I'd gotten over my foreign-phobia.

Actually, this was the first time we ventured outside the old city gates during our time in Chiang Mai, not withstanding our jungle excursion. The central portion of the city is guarded by high walls and a moat that had since been converted into fountains and lagoons. Our hostel, T.K. Hostel, was located within the old city. I'll pause to give a shout-out for the air-conditioning discount we received and hospitality by the friendly Australian-educated caretaker, T. In fourteenth century, Chiang Mai was actually the capital of the Lanna Kingdom, separate from the Siamese Thai of the South. The culture, and hence the food, remained relatively distinct for many years. 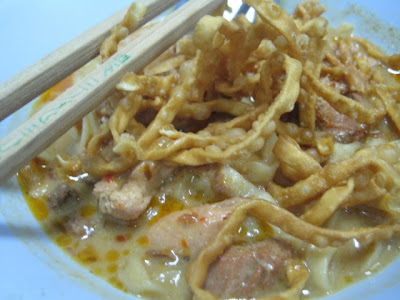 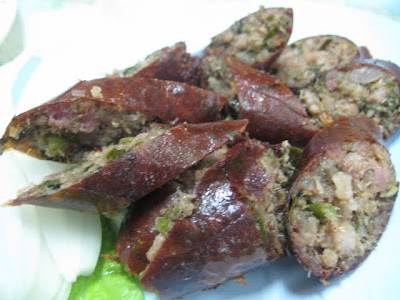 Some of the regional specialties include the above-pictured pork curry and Chiang Mai sausage. Looking at some recipes for Chiang Mai sausage, I can't see what makes them distinct. The ingredients are typical of Thai cuisine in general: galangal, lemon grass, chilies, coriander, fish sauce. They had a tough outer crust, but gave way to flavorful fillings. The accompaniment of coconut cream in the pork curry made the sauce lip-smacking and luxuriant to the tongue. 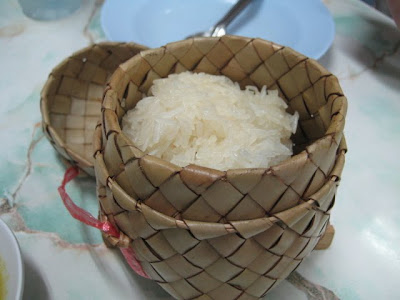 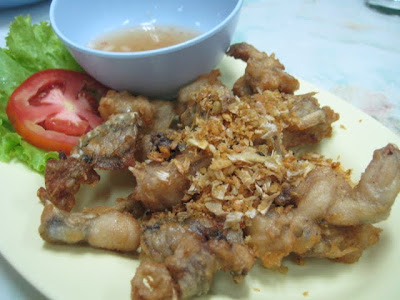 Speaking of coconut, the rice commonly used in Northern Thailand is short grain sticky rice. Often it is flavored with coconut milk. Aroon Rai served rice individually in little steamers, but I suspect that one steamer held less than one bowl. Additionally, since my friends were in an adventurous mood, we ordered deep-fried frog. As always, frog was somewhat of a letdown since there was hardly any meat on those bones and the flavor is as indistinct as chicken. In fact, on Chinese menus, frog is called "field chicken."

Each dish was cheap enough ($1-2) that you can easily pig out on everything on the menu. The portions were small enough that you could order a sufficient variety. Writing this entry now makes me regret not bringing home one of those curry packets. 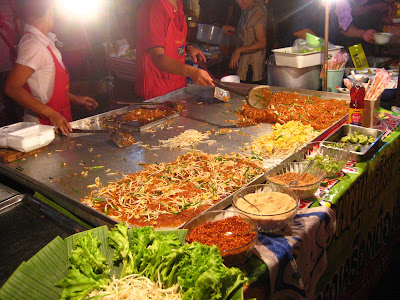 Previously, I had written about the banh mi on the streets in Vietnam, but the crown of street food in Southeast Asia would have to be in Thailand. Some of the delicacies, and not so delicacies, were outstanding and easily better than any hot dog or halal cart you'd find in New York. 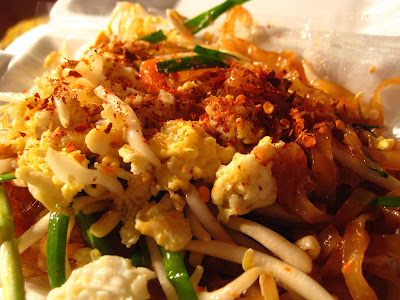 As you can imagine, pad thai is relatively prevalent throughout Thailand. While I'm not entirely sure how authentic it is, the country's reliance on the tourism industry means that there's likely to be a pad thai around every corner. This plate, from the above cart, was from the Chiang Mai Sunday Night Street Bazaar. A small town, if you're in Chiang Mai on Sunday night, you'll surely stumble upon it. The cart actually served two types of noodles. This is the thick type commonly seen in America, but they also offered thin noodles, which reminded me more of Korean jap jae. 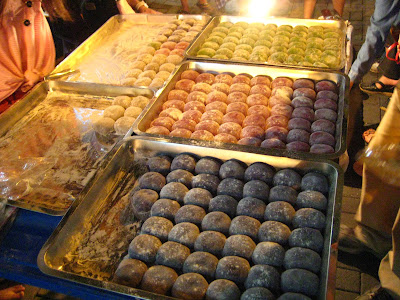 A local student group sold homemade mochi with fillings of apple, blueberry, and strawberry jelly. Though admittedly I don't know if mochi is prevalent in Thai cuisine, they were delightful. 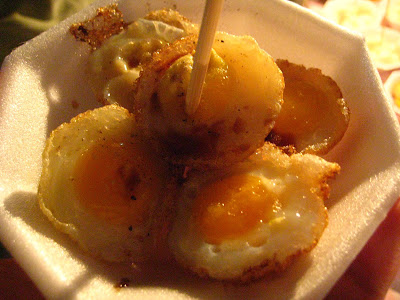 Often for a quick meal at home, I'd fry an egg with oyster sauce. With runny yolk on top of a bowl of rice, this is simple and satisfying. In Chiang Mai, I found miniature fried quail eggs. Packed with flavor and easy to pop into your mouth, these make a fast snack. 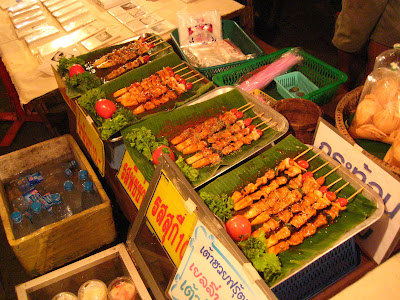 Satays and skewers are common in both Thailand and Vietnam. The flavors of the Thai skewer closely match the ones found in the appetizer section of local American restaurants. Often I found the satay with chunks of pineapple and a sweet sauce.

The smoothie lady from my "Fruits in Southeast Asia" post was also at the Chiang Mai street fair. But any of those dishes could be equally paired with a refreshing chrysanthemum tea served in a bamboo cup. 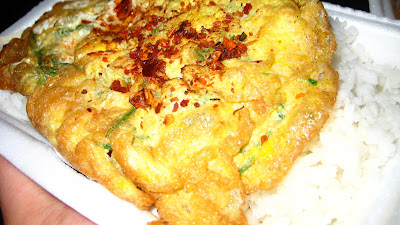 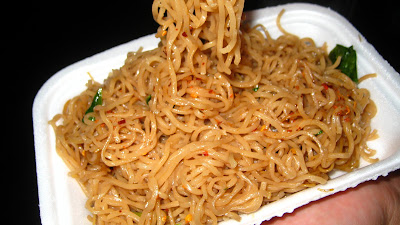 Upon arrival in Bangkok, we hit one of the temples for a mediation class led by a transsexual Buddhist nun. Though I don't think I got anywhere closer to enlightenment, I was certainly hungry after sitting on the floor with my eyes closed for a few hours. We walked near the river and found omelet rice with red pepper flakes and fried noodles that weren't pad thai. These noodles lacked the sweetness and tartness of tamarind, and reminded me more of yakisoba than anything Thai I've had. 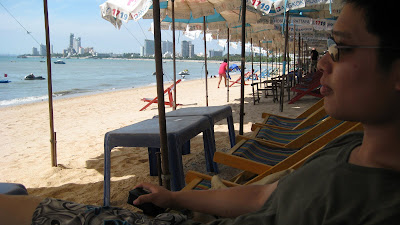 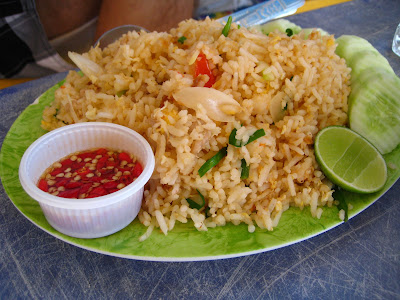 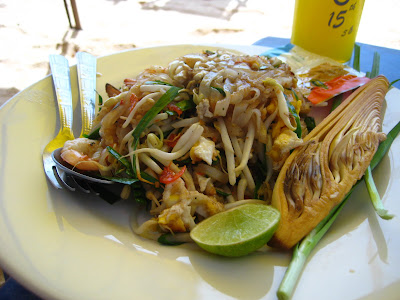 Though technically not "street" food, I spent my one day on the Pattaya beach with fried rice and pad thai served under umbrellas on plastic furniture. Though the food was good, beware for the hidden "beach sitting fee" tagged onto the bill. 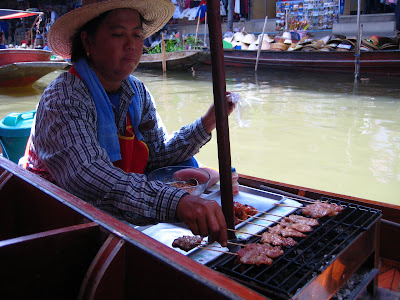 Of course don't assume that street food must be served on a street. I'd consider boat food off a neighboring boat grill in the floating market of Damnoen Saduak. Various dispensers of cooked and uncooked treats cruise by available to be flagged and patronized. 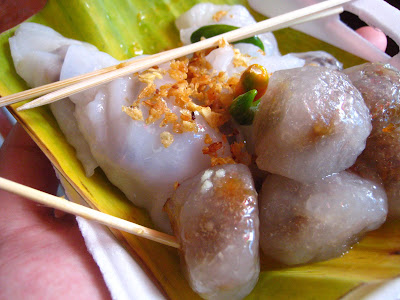 These glutinous rice balls filled with peanuts and served on a banana leaf came from the next passing boat. An old woman with a propane powered stove steamed these dumplings on the stern of her boat.