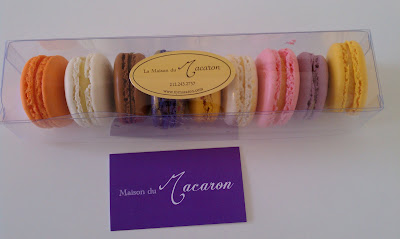 I have a soft spot for macarons. Ever since I first discovered these delicious morsels at Paulette's (now just 'lette Macarons) in Beverly Hills, I'll always buy a box whenever I see them. In a random stroll past the Flatiron Building, I wandered into La Maison du Macaron.

More...
Nowadays, most any respectable French pastry shop will have macarons, typically in common flavors like raspberry, chocolate and pistachio. La Maison du Macaron had the most unique flavors I've ever seen; I was delighted and conflicted to narrow down my choices to nine from a selection of a few dozen.

Since their flavors change daily, they don't have any type of menu. If you order online, you will have to trust in their selection. I chose the following, from left to right in the picture above: orange blossom, Tahitian vanilla, caramel fleur de sel, kir royale, blackberry bergamot, apricot champagne, rose, strawberry violet, and passion fruit. 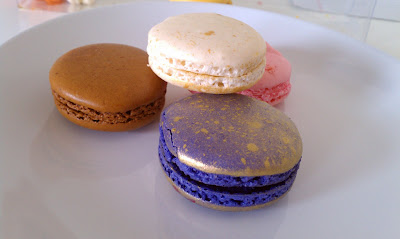 The pastry chef knows what he's doing. It seems that La Maison du Macaron used to be called Madeleine Patisserie. I suppose their madeleines are good too, but the shift to macarons was smart, as that market is blowing up. Each flavor was intense and unique. I picked ones that were unusual, but I bet the classic standbys would be just as satisfying.

The biggest issue with macarons are its cost. I understand they are very difficult to make, delicate enough to require hand-crafting. As of now, they are still somewhat of a novelty item, cost prohibitive for regular consumption. Until people stop confusing macarons with macaroons, the price will still stay pretty hefty. For clarification, a macaroon is a meringue cookie, usually coconut flavored in the U.S. A macaron is essentially an almond powder sandwich cookie with a filling of usually buttercream. The box of nine I got was $25 (though you save $3 getting the clear box instead of a fancy gift box).

Movie Review: A Matter of Taste

What Eric Ripert says about Paul Liebrandt's food, I apply to A Matter of Taste--"Yeah it is good. I would recommend."

Accumulating over 200 hours of footage and shooting for over nine years, Director Sally Rowe captures the Liebrandt's fall from grace and subsequent revival in the New York dining scene. I am not sure what movie she set out originally to make, but the fickle restaurant business created just the right kind of compelling story set in 68 minutes.

More...
In many ways, A Matter of Taste is similar to Jiro Dreams of Sushi, the other Tribeca Film Festival movie I saw last week. Both are about the key central figure, a man with uncompromising talent and drive. Yet in Jiro's case, the story was nearing its end. The adversity in his establishment at the top had long passed. For Liebrandt on the other hand, the nadir of his career is thrown on the screen. In fact, I could imagine the documentary Liebrandt Dreams of Cooking in fifty years being very similar to Jiro Dreams of Sushi.