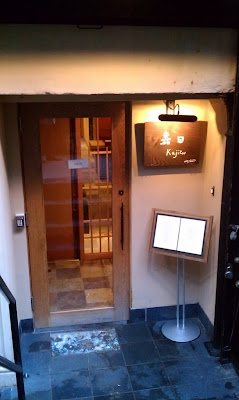 I sidled up to the bar, the seats of choice for observing a masterful hand at work. Kevin, my dining companion for the evening, had already arrived and was speaking softly to Chef Masato Nishihara. Unlike Urasawa, Nishihara was not particularly talkative, but both adopted the humble shyness of Japanese artists. Kevin had emailed me a few weeks ago to join him for an impromptu meal at the only Japanese shojin-ryori restaurant with two Michelin stars in America. "Buddhist vegetarian food?" I wondered to myself. Given my recent experience with Vietnamese Buddhist cooking in San Francisco, I jumped at the invitation.

When eating with Kevin, there is no real choice. We ordered the more extensive tasting menu of the two with accompanying sake pairing ($34). The Hana meal set included nine courses for $70, to which we added two supplemental dishes. While $70 may seem like a steal for a nine course tasting menu, you have to consider how much money you save from having no meat or seafood dishes. While I'm not entirely certain that shojin style cuisine is completely vegan, I didn't detect any trace of animal products in the food. 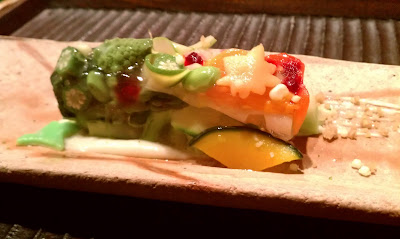 The first course was the prettiest of the evening. Varied and complex vegetable patterns peaked through a gelee, set on a carved plate of wood. The colors were meant to evoke changing seasons. I ate from left to right, while Kevin went the opposite direction. It was a refreshing start to the meal, but too many textures and flavors to form a coherent impact. However, visually, this dish was stunning and showed precise execution that I would expect for the rest of the meal. Kevin remarked at the oddness of parsnip in a Japanese dish. The first sake of the night started fairly sweet, a decent pairing to this floral dish. 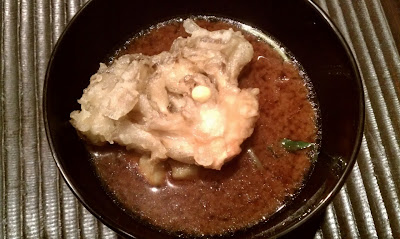 The dense color of the soup comes from the aging process for the miso, which supposedly enhances the umami flavors and brininess of the soup. While the soup itself was pleasant, the highlight of this dish was the maitake tempura, perched a top a bundle of nasu and elevating it above the liquid. I have never seen maitake tempura, but the crispiness paired with the meaty mushroom and a hint of Japanese mustard convinced me to try this one at home. 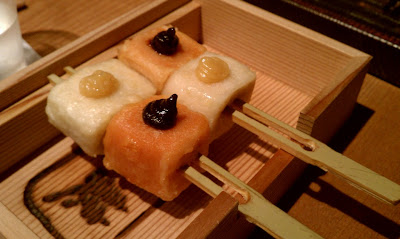 Our set menu was interrupted by the first of our supplements. Nama-fu is wheat gluten, a common vegan meat substitute. It can be formed into different shapes. Here, the lighter block is mixed with rice flour, while the darker one has contains millet flour. Honestly, both tasted the same to me. Both had the texture of a grilled mochi, pliable on the outside, chewy and toothsome on the inside. 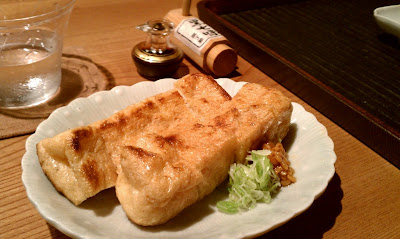 It's somewhat disingenuous to call this a simple dish. While it may seem simple, the execution in keeping a crisp exterior with a spongy center was elegant in it's simplicity. The pairing with green onions and soy made this one of my favorite selections of the evening. Pictured in the back is also the optional thickened soy sauce and shichimi pepper. 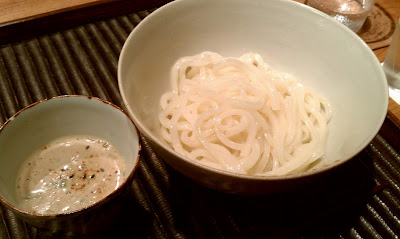 The difference between house-made udon and frozen udon is akin to the difference fresh and dried pasta. Here, each noodle had the proper bite and bounce. Dipped, soba style, in a mixture of sesame sauce, green onion, and chaoyte, it made a little mess on my shirt. But the flavors were so fresh, I could easily eat this udon for a meal on its own. The sake had a dry, rice flavor with a rice aroma. 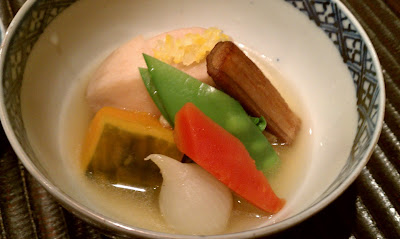 It's impossible to eat at Kajitsu without marveling at the colors of the dishes. Chef Nishihara trained in kaiseki dining, where presentation is an dominant aspect of the meal. Beauty in simplicity could be a mantra painted on the wall in detailed brush strokes. Did I mention that the Chef signed the menu after the meal with a calligraphy brush? This dish is a composite of various vegetables, each cooked separately to varied doneness and compiled in a soy broth. The colors struck me immediately, and I mistook that bright redness for a tomato. I bit into it and found the sweetness of a carrot. The lump in the back is satoimo, taro. I especially enjoyed the topping of yuzu shavings. 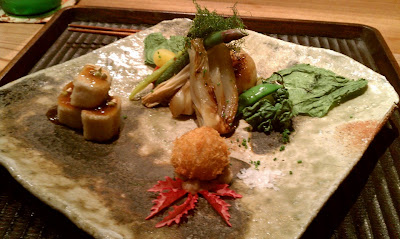 The main course was actually the most disappointing. While each component was good on its own right, I felt that the plate lacked a unifying theme. The croquet, an intriguing ball of textures, could have been a separate dish on its own. The nama-fu made a reappearance. Had I known it would've been part of the tasting course, I would not have ordered it separately. However, this time, the cubes of wheat gluten were topped with soba sauce and a dash of wasabi, a flavor profile I though matched better than the soy sauce and shichimi. Since this was the main course, the kokuryu sake was served in a larger glass. Although I can't say much for the pairing, the sake was well-timed because it was my favorite of the night and I had the most of it to drink. 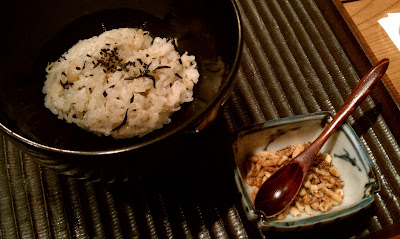 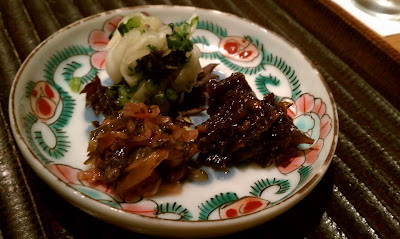 While you usually won't see a rice course on a tasting menu, I wasn't surprised to see this dish as part of the kaiseki meal. The rice itself was cooked to perfection, as can be expected. Flavors of the hijiki seaweed permeated the rice. I added a few spoonfuls of the puffed rice for texture, but it was unnecessary. Eating the rice with the accompanying pickles, I imagined creating gourmet onigiri, each filled with a different pickled center. The daishichi sake returned to a dryness, considering it no longer needed strong rice notes to pair with a rice dish. 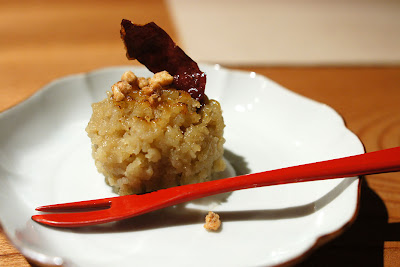 The dessert course was a Japanese confection made of sweet potato with a center of coconut "cream." Biting into it, my first taste reaction was actually renkon or lotus. The waitress didn't mention any lotus among the ingredients, so something about the combination of flavors gave me that sensation. 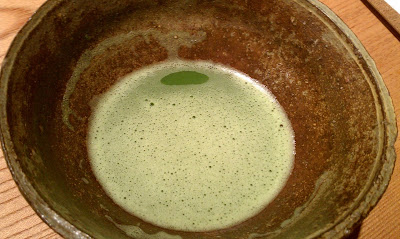 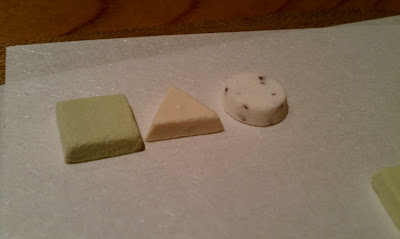 According to Kevin, Kagizen-yoshifusa is a renowned confectioner in Kyoto. The tiny candies we received were flavored green tea, plain, and shiso. Each had a burst of sweetness and quickly dissolved to nothing on your tongue, especially when followed by a sip of the freshly made green tea. Chef Nishihara made each bowl himself with exquisite care. Even as the end to a long meal, the tea had an accompanying ceremony. 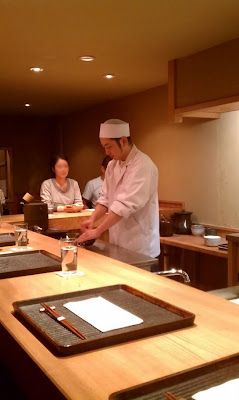 Taken from the website, "Kajitsu means 'fine day' or 'day of celebration' in Japanese. We have chosen the name Kajitsu hoping that a visit here will always be a special occasion for our guests."

This principle is reflected in the friendly service we encountered. Considering service, decor, and general ambiance play such a definitive role in Michelin ratings, I can see how this restaurant garnered such acclaim. Yet if I were to compare this two star establishment to the other Japanese two star restaurant I've tried, Urasawa would be a step above. I can't say surely whether that meant Kajitsu should be lowered or Urasawa raised, although it's a moot point now that Michelin is out of Los Angeles. No matter the rating, this is an excellent place to bring a vegetarian or if you feel like a detox. I noticed the lack of meat, but I didn't miss it. Kevin and I thought we would walk out hungry, but we were plenty satisfied.