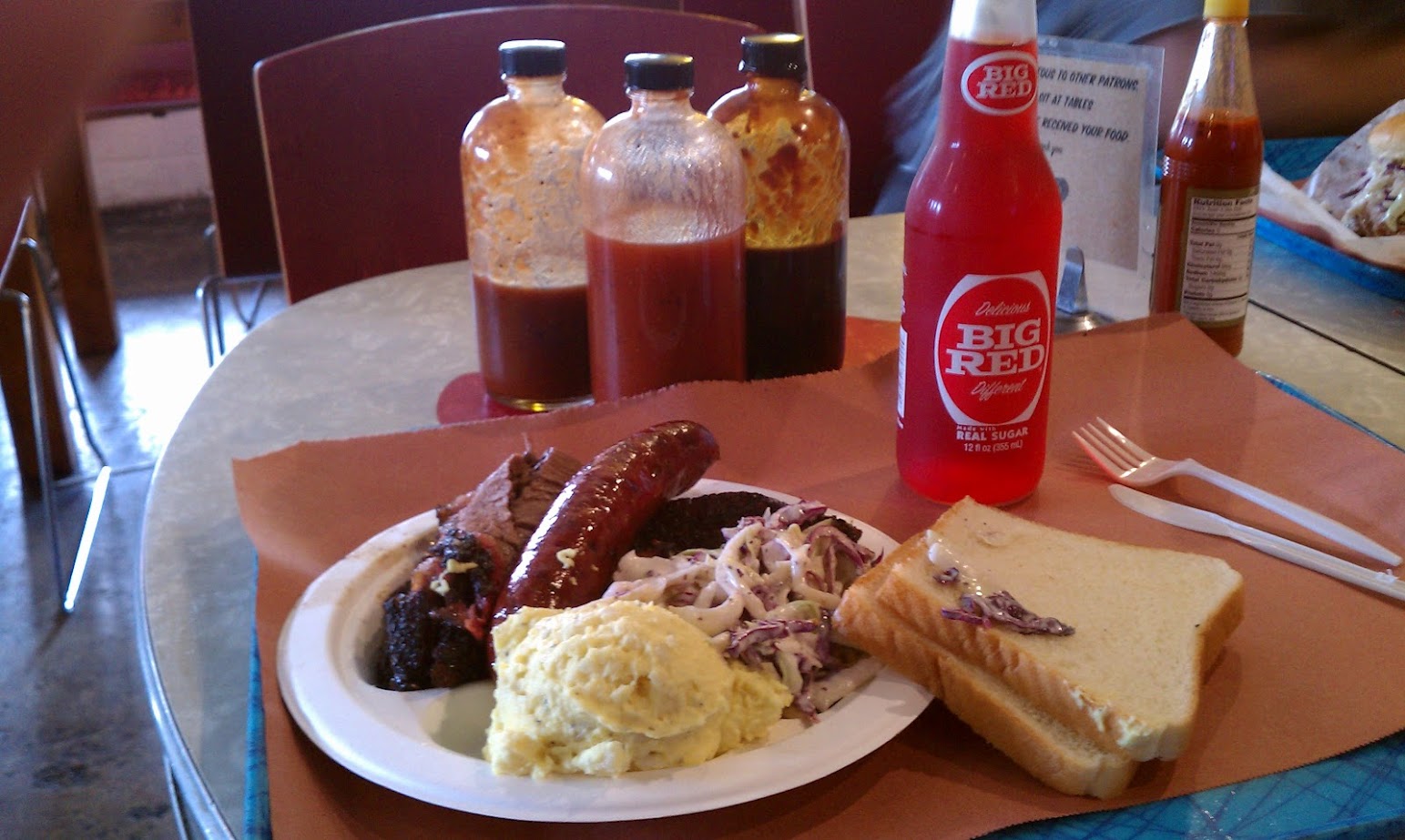 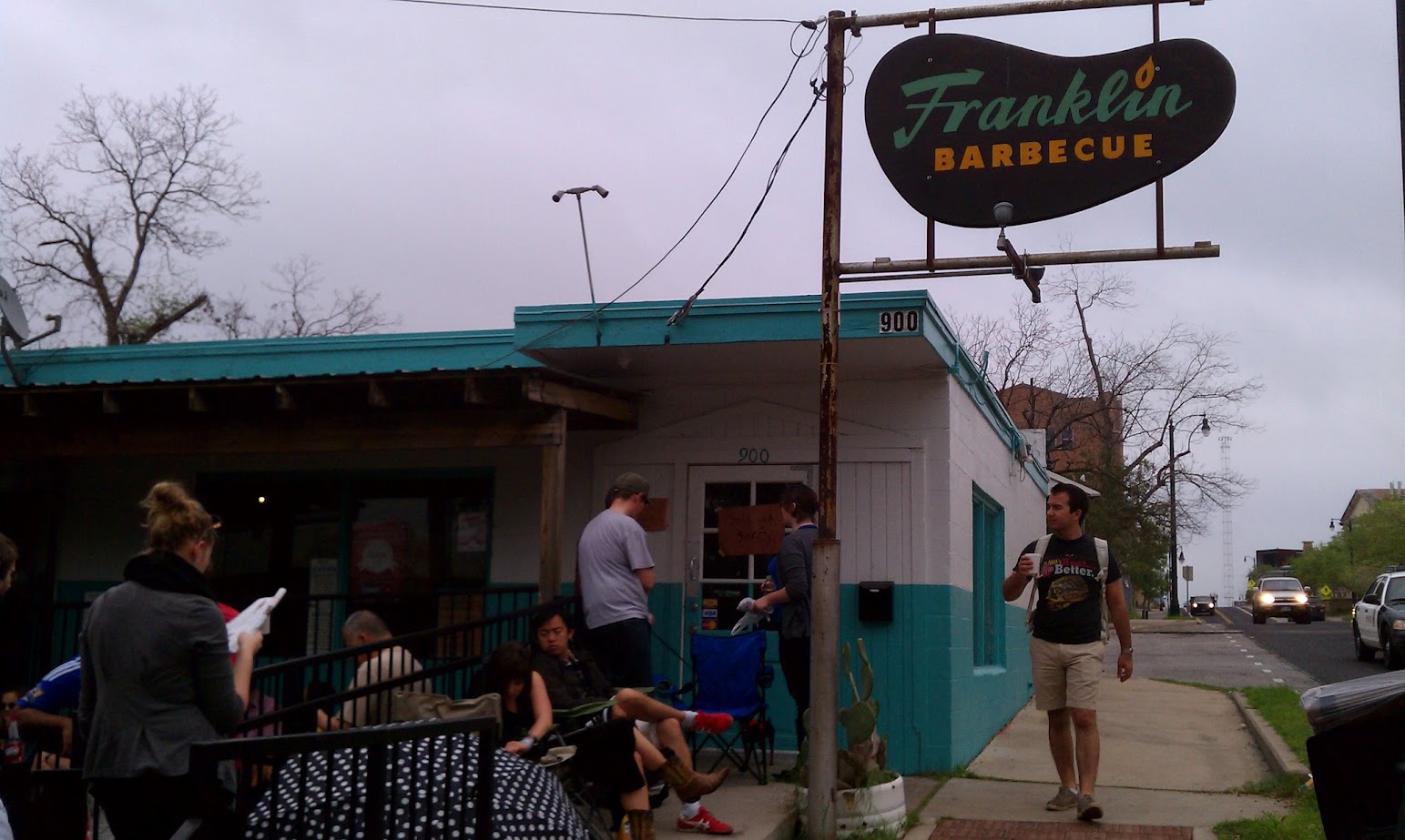 On a dreary Wednesday morning I was sitting on metal patio furniture, hoping that the clouds above my head didn't bring rain. I was entering the second hour of my barbecue trials. Despite arriving at 9:30 in the morning, I wasn't first in line for a restaurant that didn't even open until 11:00. I wasn't surprised; I had done my research beforehand. You have to be prepared when you're pursuing the best barbecue in the country. 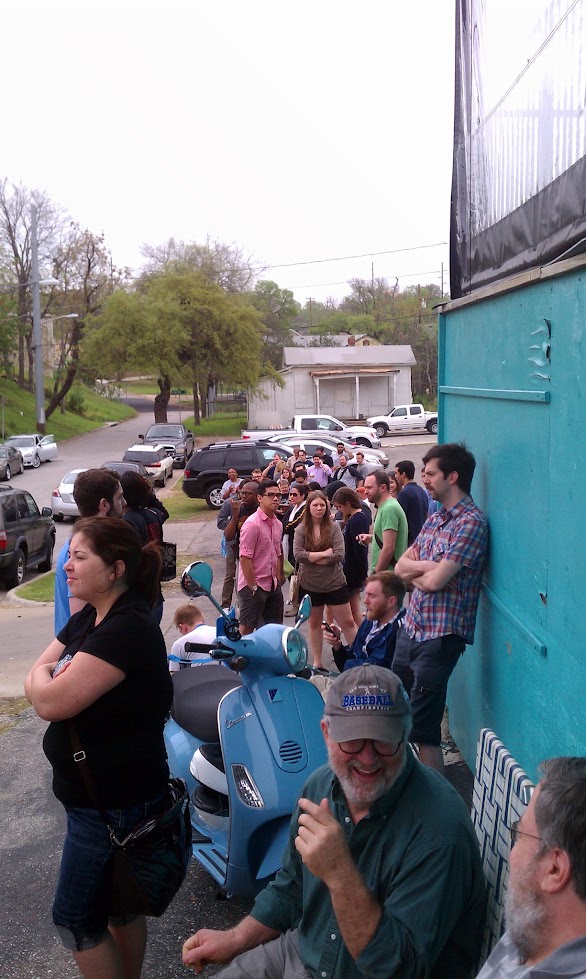 Franklin Barbecue has been a gourmet press darling since its humble beginnings as a trailer in an East Austin parking lot in 2009. Since then, it has moved to a building off the 35 freeway. Every morning, besides Mondays when it is closed, Aaron Franklin gets up before dawn to prepare his daily ritual. While the restaurant is not a one-man operation, Franklin's involvement is critical, from stoking the flames of his hardwood smokers to carving up every single customer's order. 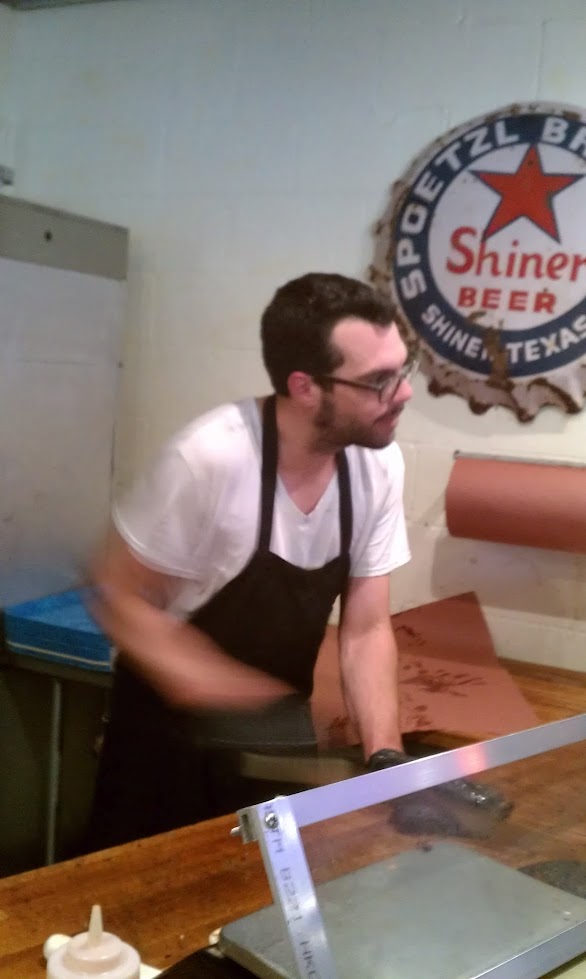 Because Franklin takes his time to chat up each of his customers, the line moves at a glacial pace. The restaurant's official hours are eleven until sold out. At this point, they don't bother removing the sold out signs anymore. If you're not already in line by eleven or twelve, you're going to have slim pickings of whatever meats are left, if any. 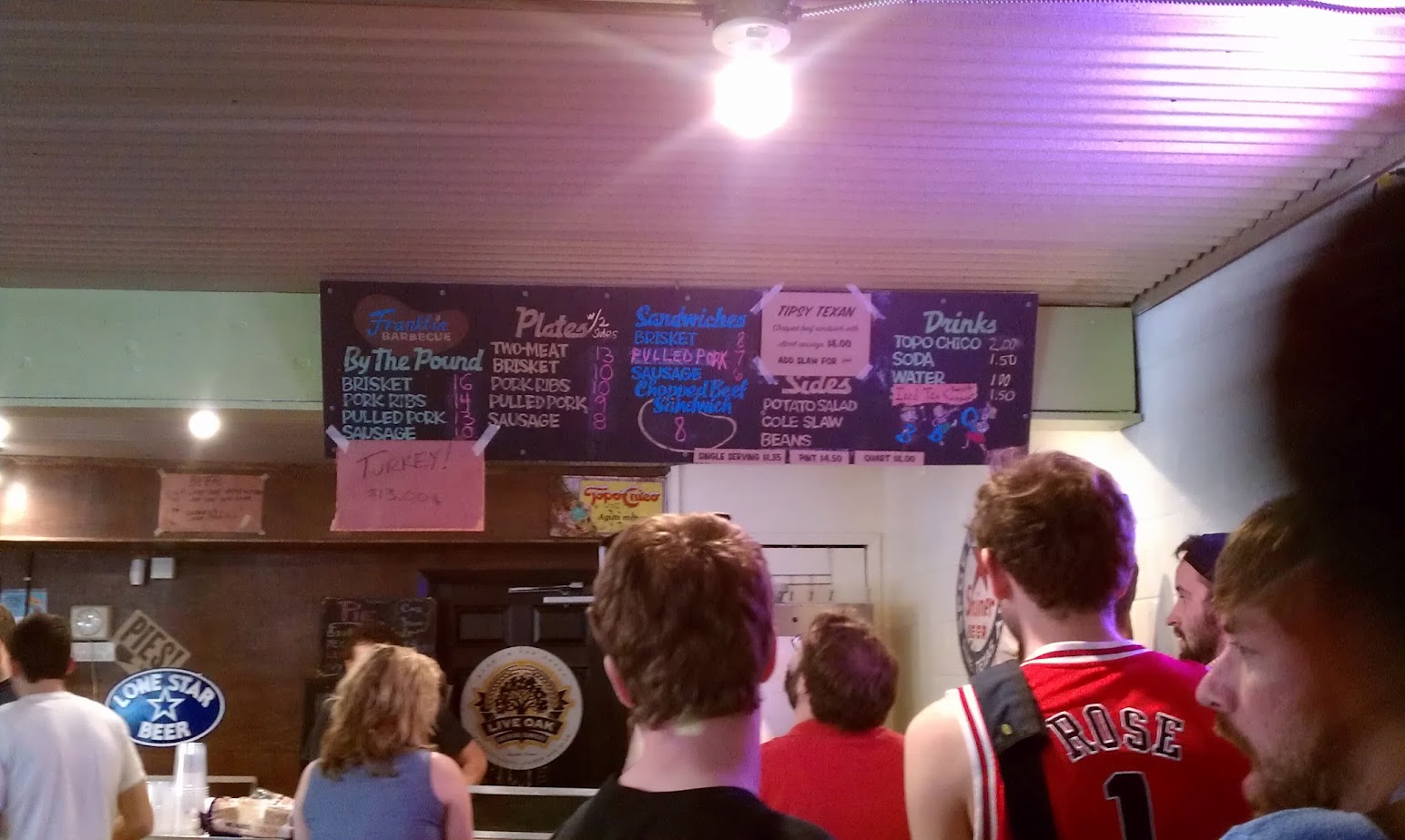 Finally at the front of the line

Around 11:30, I finally made it to the counter. As a Texas barbecue, Franklin's claim to fame is is brisket. Considering I had just done my Lockhart barbecue marathon the day before, I was hesitant to get more. But I had yet to try any Texas sausage. 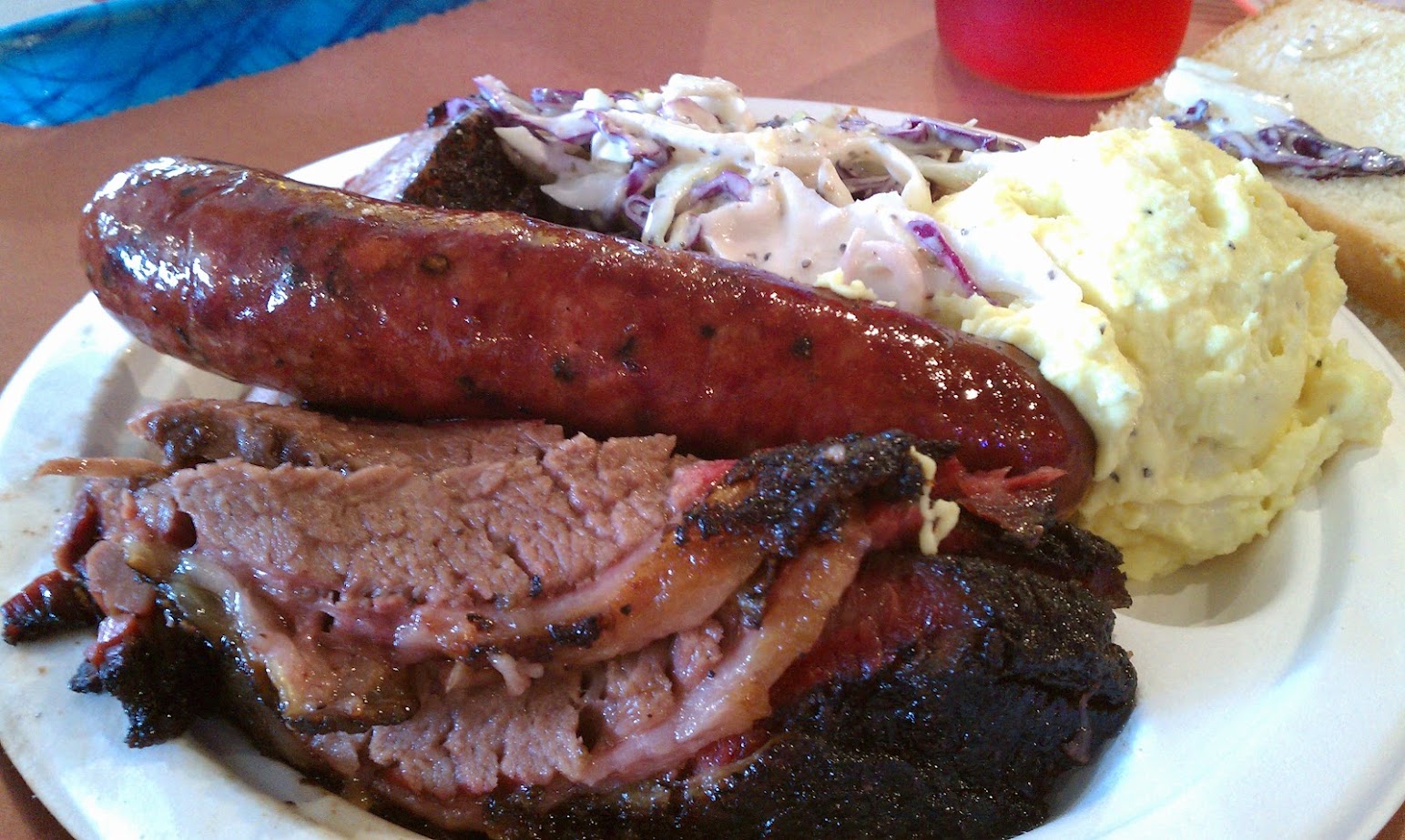 At Franklin's suggestion, I got half fatty, half lean brisket. Keep in mind that lean is a relative term and does not imply any dryness or lack of flavor. The brisket was as good, if not slightly better than the brisket at Smitty's, my favorite of the Lockhart three. There is complexity to Franklin's barbecue that many places lack. While many barbecues have two or three flavor notes, the brisket at Franklin has a chorus. The sausage was phenomenal. I made very little progress cutting through the casing with my plastic knife, but when I finally punctured it, the juice squirted out from its cylindrical prison. I'm not sure what mix of meats went into that sausage and the seasonings were relatively simple. But the barbecuing process made it uniquely delicious. Franklin's also offers three signature barbecue sauces, but besides the chipotle flavored one, they weren't too notable.

I'll have to come back and try the pork ribs one day. The bit of pulled pork, donated to me by my line compatriot, was bland. The big question is whether I think Franklin Barbecue was worth the two hour wait. For those visiting Austin with time to spare, it is worth a free morning. It would take even longer to drive out to Lockhart.