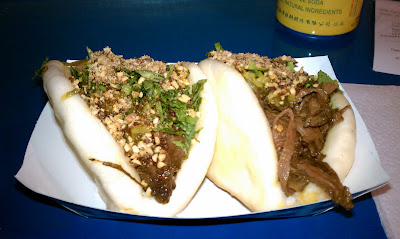 As a kid, I used to visit Taiwan annually. Moving from California to New York, I knew that the demographics would alter the culinary landscape. And until I'm willing to take the long train ride out to Flushing, Queens for good Chinese food, I usually settle with whatever is nearby or out of my own kitchen. Recently, I've been on a Taiwanese bent. Since I won't be going back home anytime soon, I sought out some local options.

More...
First is Baohaus, the mindspring of Eddie Huang, a second-generation Taiwanese-American. Besides his colorful antics, he also opened XiaoYe recently. Lower East Side is just so far away from me that it took almost a year for me to finally get down there for food. It was well worth it.

I tried three of the signature baos (Taiwanese steamed bun sandwiches) with high-end ingredients like Berkshire pork and free-range chicken. The Haus bao was a red-cooked hanger steak ($4.50). An odd choice of meat for the cooking style. Typical Chinese red-cooked meat is pork. While the haus bao had the right flavors, the texture wasn't quite right. I much preferred the Chairman bao the equivalent bun with pork belly ($4). Maybe it's the traditionalist in me, but the pork fat coated the bun just right in combination with the cilantro, peanuts and pickled mustard greens. I also enjoyed the Birdhaus fried chicken bao with a spicy kick ($4). To finish it off, some fried bao fries with black sesame sauce ($3.50) washed down with an Apple Sidra.

Second, I've been following the NYC Cravings truck for months. It serves Taiwanese pork chops and fried chicken rice bowls primarily. Unfortunately, as a truck, it's never near me at just the right time. And I still have issues traveling to get to a food truck. Luckily, last week it came up to my part of town. I eagerly got there early, anticipating a huge line. Seems no one else got the message. A few customers here and there, but no hungry masses. Good thing too, considering it took more than ten minutes for them to fill my order. Such a delay from a food truck is really not okay. No wonder its Facebook page has pictures of long lines. 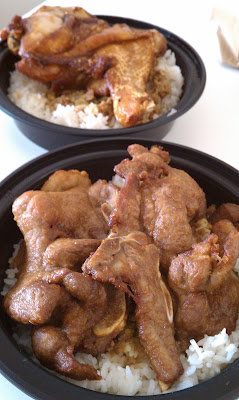 I finally brought back pork chop and fried chicken bowls ($7 each) to my apartment. Alas, the meat was one-dimensional. All I could really taste was the "pork sauce," or what I thought was simply soy sauce. Both the pork and the chicken had no pizazz, had nothing to distinguish it from just another piece of protein.

So, one hit and one miss. I'll have to try XiaoYe next*. Or better yet, maybe I should just suck it up and make the perilous journey to the Chinatown in Flushing.


*Update: Due to Eddie Huang's above mentioned antics, including an all you can drink Four Loko night, he has closed Xiaoye for good. Guess it's Excellent Pork Chop House for me.