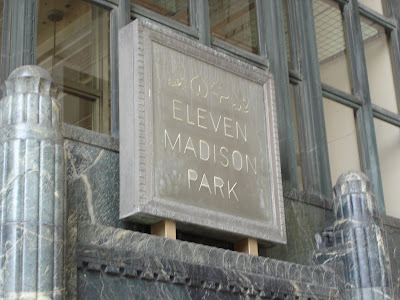 After hearing for months about the fantastic experiences had by many of my friends at Eleven Madison Park, I finally got an excuse to go when my friend Mattatouille came to NYC. It started with Sam raving about his new favorite restaurant EMP when we met up at Di Fara for pizza in the summer. I kept seeing EMP all over his twitter feed and couldn't figure out what it stood for. Then came Fiona and Danny. I couldn't take it anymore. I just had to try it myself.

Matt and I decided to come for lunch. Though Chef Daniel Humm offered a gourmand six-course tasting menu for lunch ($68), we opted for the three-course prix fixe ($42). There was also a two-course ($28) available. We picked two each from the five first-course, four second-course, and seven third-course dishes. In usual blogger fashion, we split each dish for a sample of each. 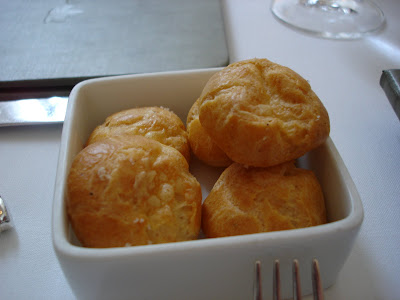 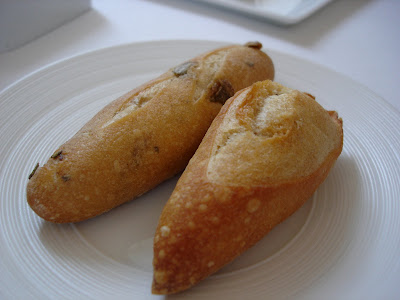 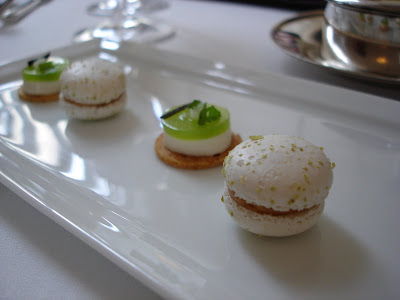 The starters came out and we were off and running. I have never tried a savory macaron, and I was quite looking forward to this little morsel. Having missed out on New York's Macaron day last week, this was going to be my chance to make up for it. Apparently several bakeries got together in an effort to push macarons as the next cupcake gave out free samples. By the time I made it to Bouchon Bakery, they had ran out. While I liked the sweetness and texture of the pastry, the apple dominated and I didn't get much foie flavor at all. I would've preferred either more foie and less apple, or simply for them to serve it as a mignardises rather than an amuse. The touch of truffle on the panna cotta added a nice earthy balance, but otherwise, too small to be memorable. 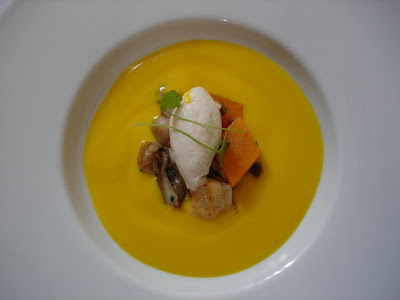 The first dish was an introduction to what Chef Humm could do with mushrooms. Commonly known as "chicken-of-the-woods" mushrooms, I could see where maitakes got that odd moniker. It was meaty in a sense, but much more flavorful than to compare to chicken. It soaked up the velvety velouté and each bite released more and more of that milky butternut squash. There was a dearth of prawn; I only noticed that little piece near the bottom. The dish would've benefited from more shrimp flavor, and maybe less of a curry overtone. 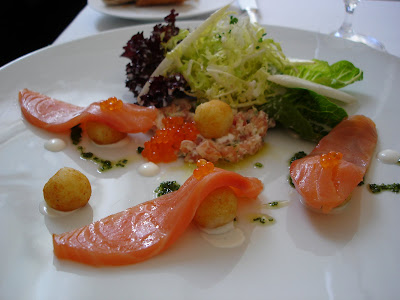 While the velouté favored a tightly knit plate composition, the salmon spread out playfully. Both presentations benefit in making a small amount of food seem larger than it really is. Balik salmon is a lightly smoked Norwegian salmon, which paired nicely with the frisée (otherwise known as curly endive). The smoked sliced topped pommes dauphine, mashed potatoes mixed with choux pastry and fried, giving a whimsical presentation. My favorite component of this plate was the salmon tartare in the center with a perfectly precise amount of lemon and roe. 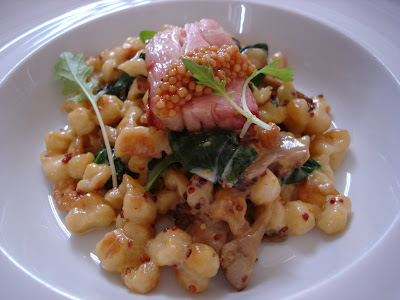 This was not the first time I've seen pork belly paired with spaetzle. I wonder if its a common German dish. I felt this dish to be a little on the salty side. In fact, the spatezle reminded me of a fancy macaroni and cheese. Oddly enough, the pork wasn't overly salted. I enjoyed the pickled mustard seeds adorning the slab of meat, almost like a string of caviar. The spinach helped cut through the heaviness of the spaetzle. Again, you can notice the integration of more mushrooms, possibly maitake. 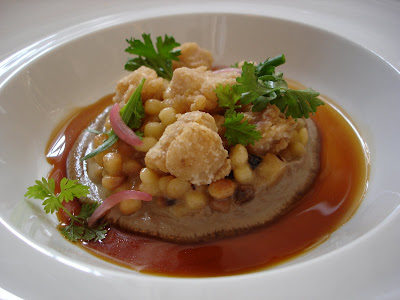 Sweetbreads always remind me of chicken nuggets. That might make it sound like sweetbreads are repulsive. The very opposite actually, I love chicken nuggets. But most of the time I have sweetbreads, they are deep fried and breaded. It's hard not to make the comparison. Besides, you'd be much more turned off if you knew what sweetbreads actually were. This was my first experience with fregola sarda, a Sardinian toasted round pasta similar in texture to orzo. They served a similar function in this sweetbreads dish as the spaetzle did with the pork belly. They added substance to balance out the petite meat on top. I was amazed that the sweetbreads managed to stay crispy even when surrounded by a moat of sauce. 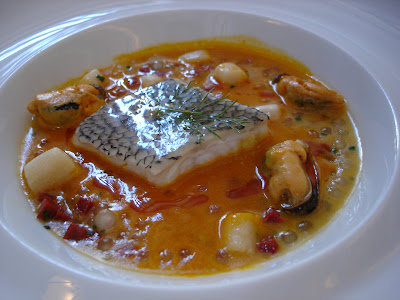 I must have had it before, but I couldn't remember the last time I had bouillabaisse. The flavor of this one stuck with me throughout the day. Unlike the velouté, which coated your mouth but then washed away with a sip of water, the fiery bouillabaisse grabbed me and didn't let go. Just look at that shimmering black bass; the fish was perfect. Though the menu listed manila clams, I believe they were ultimately substituted by bay scallops. Not that I complained, the scallops were delectable and I think clams would've been redundant with the mussels. 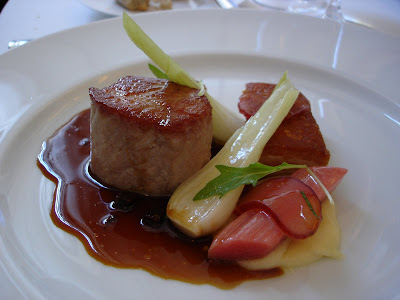 I did a little research. St. Canut Farm is a French-Canadian farm in Quebec specializing in milk-fed piglets. Milk-fed young pork--you'd imagine it would be quite tender. This dish consisted of two pieces: the loin and the belly. The loin was unfortunately overcooked. It lost much of its ability to retain juices. A pity considering how delicious the jus was. In fact, I could only eat the loin when it was heavily doused in jus. The belly on the other hand--magnificent. 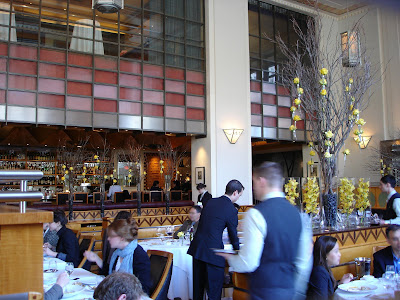 Since most people come to Eleven Madison Park for dinner, I thought I would get a unique perspective trying them for lunch. I got great pictures. The dining room with its high ceilings, private dining space upstairs, and Miles Davis playing on loop had a great old feel. High windows also gave me terrific lighting for some of these pictures. And I still lug around my ten pound point-and-shoot. For something this large, I might as well go SLR. Each of the dishes I had were thoughtfully conceived and most were outstanding hits. I questioned the execution of a few, such as the cochon and the pork belly. A little too long under the salamander here, a little heavy handed on the salt there. Perhaps their dinner would be completely free from these relatively minor blemishes. I'll be sure to tell you when I return.

"I Want to Send Your More Jerky!" 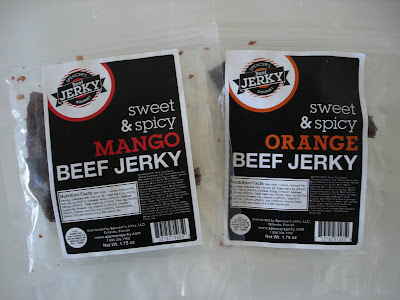 "I Want to Send Your More Jerky!" The subject line in my inbox caught my eye. Surprisingly, it didn't go straight to spam with a subject title like that. But no, this wasn't an advertisement for fake Rolexes or male enhancement pills, Jerky.com was launching a new product and wanted to send me a sample.

More...
I had previously received dried pineapple jerky from Jerky.com before, but didn't have a chance to try the beef jerky or their turkey jerky products. Actually, the Exotic Jerky Pack caught my eye in my first encounter with the website. I'm always a fan of game; buffalo, venison, ostrich, and alligator certainly fit the bill.

This time, Jerky.com offered to send me their new sweet and spicy orange and mango jerkies pictured above. I opened the bag and was hit by a wave of comforting meaty aroma (Is it bad to indulge in the smell of dried meat?). I preferred the orange flavor to the mango. The orange was much more subtle, with just a lingering citrus complement. It hit the beefy craving that manifested with that first whiff from the bag. The mango jerky had a much stronger spicy kick and was fruitier in composition. Fruity certainly, but I wasn't getting mango. If there was mango flavor, it was blocked out by the spice and the beef. 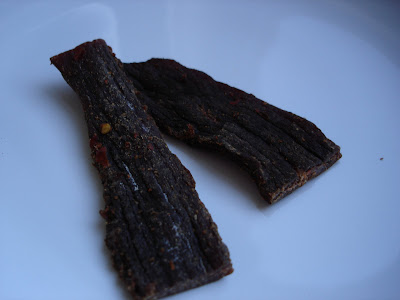 Mango on the left, orange on the right

I glanced at the ingredients list for the jerky and found some familiar items--beef, soy sauce, mirin, balsamic vinegar, wocestershire sauce, molasses, anchovy puree, liquid smoke, and orange and mango respectively. Since the brand touts its premium ingredients I wanted to check myself for anything extremely foreign. No glaring science experiment preservatives, which is a good sign when you're looking at something that should be naturally preserved.

Check out the site! Looks like they even have free shipping. And with a domain name like that, you can bet they know what they're doing.