Horatio Alger, with a Side of Fries 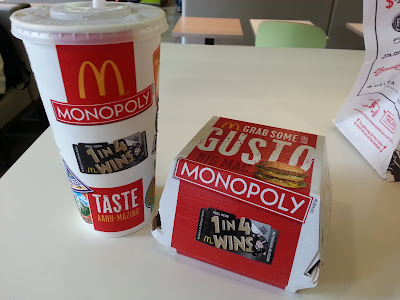 It's that most wonderful time of year once again--Monopoly is back at McDonald's! Though McDonald's is promoting this year as the 20th Monopoly sweepstakes, the restaurant has been collaborating with Hasbro since 1987 all over the world. We all know about the elusive Boardwalk piece and the 1,000,000 McDoubles it would buy. Besides that top prize, the rest have shuffled over the years. Yet, the allure of the money has never been my main excitement over Monopoly at McDonalds. I decided to analyze the aspects of the promotion that make it so appealing.

More... Monopoly has always been about the American Dream. With some luck and saavy investing, you can become rich and powerful in your own little world. This concept is what drives American ideas of economy and power--we don't mind inequality, as long as everyone has a chance to make it big. We're inundated with individual success stories, despite the fact that real life odds are heavily stacked in favor of certain individuals. We celebrate that poor, come from nothing individual. This had special resonance during the Great Depression, when the game experienced its greatest growth. While there are plenty of iconic American board games, this is what makes Monopoly the most "American."

Pairing Monopoly with McDonald's was a stroke of marketing genius. If Monopoly is most representative of this country within the game sphere, then McDonald's dominates the food. These two powerful brands form a successful synergy, despite the fact that Monopoly at McDonald's is completely a game of luck, disregarding any semblance of strategy (unless you make tactical menu choices to optimize your game pieces, like me). If anything, Monopoly at McDonald's involves teamwork, pooling your pieces and splitting the winnings.

What Monopoly at McDonald's gives you is not just the sliver of hope of winning one of the prize. While that lottery mechanic's effect on behavior is well-documented and intuitive, the best aspect of the game is that it gives you a justification for eating at McDonald's. We have the chance to eat our way to fortune. How cool is that? If Monopoly is an analogy for life, Monopoly at McDonald's is the gloss of the American obsession with unhealthy food. We're all dreamers, now we can channel our dreams through fast food. ^
Posted by Aaron at 9:51 AM 2 comments: 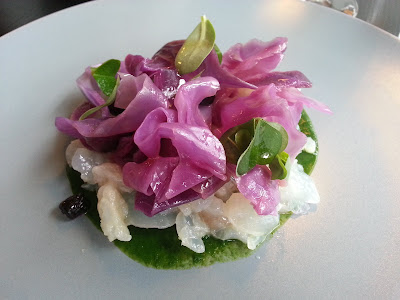 We here in the United States have long been exposed to the modernity of Scandinavian design in furniture, the sleek lines, clean surfaces, and wooden accents, but only recently has Scandinavian food made an impact in this country. With the rise of Marcus Samuelsson, Noma, and even the Swedish meatballs in the Ikea commissary, the recent emergence of Scandinavian cuisine has put Norway, Sweden, and Denmark on the map as modern dining destinations. A large part of my decision to visit Copenhagen was for the food; though because of late planning, a reservation at Noma was out of the question. Instead, I chose Radio, one of the Noma-alum restaurants focusing on local ingredients.

More... Radio, self-described as "unpretentious," has that casual atmosphere well-suited for a restaurant on Berkeley's College Avenue. The facade is simple and unadorned, the interior unembellished, with a rustic flair in the wood paneling. Large photos of the nearby organic farms where most of the ingredients are sourced line the walls. Also notable, like much of the Scandinavian population, the waiters were impeccably handsome. 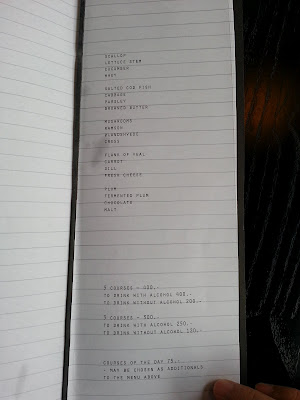 The menu consists of five daily courses. Diners select either the full five-course tasting or pick and choose three of the five. You can also elect a wine pairing, or in my case, a non-alcoholic pairing. The waiter brought out an amuse of green beans, sour cream, and crushed olives. There was no preparation beyond tossing the ingredients together. It was all about the ingredients. This would set the tone for all of the courses--the chef's skill would come from combining the flavors more than the cooking technique. 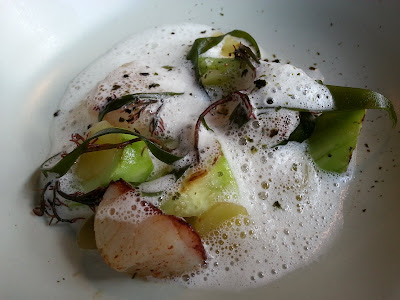 Scallop, lettuce stem, cucumber, whey
Paired with cucumber juice
The first course featured excellently seared scallops. The dish's components clearly evoked sensations of the sea and surf. While I wonder whether seaweed featured in Danish cuisine before, I had no doubts that it was sourced locally. The cucumber juice pairing would characterize much of what the non-alcoholic pairings attempted. The juices would seize on a component flavor of the dish and try to highlight it. In this case, the refreshing cucumber beverage did just that. 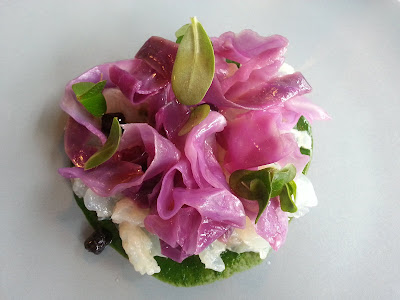 Salted cod fish, cabbage, parsley, browned butter
Paired with elderflower juice
This dish wins the most beautiful plate award of the year. The wonderfully vivid cabbage had a crispness but none of the astringency associated with purple cabbage. The salt cod is actually uncooked, a preparation more similar to a crudo. Flavorwise, the cod held up, but I would've preferred for more of the natural flavor to come out rather than masked by the abundant use of brown butter. Cod is an oily enough fish without the addition butter. I've always been a fan of the slight medicinal quality of elderflower, and this pairing worked to cut through the fattiness of the cod. 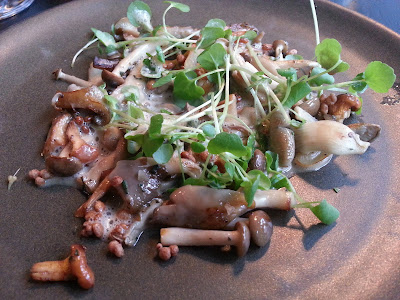 Mushrooms, ramsons, ølandshvede, cress
Paired with sparkling blueberry juice
Despite the more exotic ingredients of this dish, the flavors were pedestrian. The waiter told us the mushrooms were wild chanterelles. Ramsons, also known as wild garlic, added little in flavor. And as far as I could understand, ølandshvede is a type of spelt wheat, manifested in the dish as little crunch granules. Although blueberries in the region are plump and delicious, the sparkling juice was too sweet to pair with this dish. 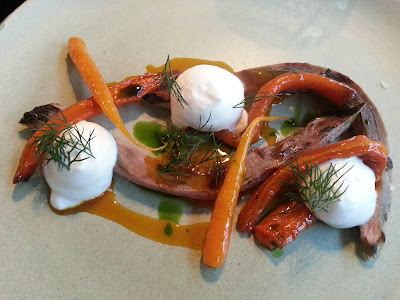 Flank of veal, carrot, dill, smoked cheese
Paired with carrot apple juice
The main course was the oddest tasting dish, though not necessarily in a bad way. Carrots prepared two ways, one fresh, the other pickled and steamed, were the predominant flavors. Although the smoked fresh cheese, with the consistency of cream, had such strong smokiness that a small dollop would flavor the entire dish. Veal flank was a little tough as can be expected with that cut. By itself, I don't think the meat was seasoned at all. Most of the flavor came from the cheese and carrot. Dill, the omnipresent Nordic herb, went well with the carrots. 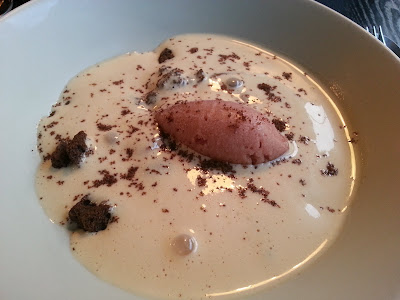 Plum, fermented plum, chocolate, malt
Paired with plum iced tea
Dessert came in a soup bowl. The plum came in the form of a sorbet, floating in a white chocolate lake. Normally not a fan of white chocolate, I was pleasantly surprised by the mellowness of this dessert. It didn't have any of the artificial cloyingness I associate with white chocolate. The iced tea was also a refreshing way to cleanse the palate.

The overall meal had some hits and misses. For a casual dining experience, more affordable than Noma, Radio was right on target. Speaking of price, at 400 DKK (~66 USD)for the five-courses, it was very reasonable. Meals in Scandinavia are outrageously expensive; so in comparison, this was actually a steal. The non-alcoholic pairings were a nice novelty, but the wine pairings were much more successful. While I don't know if I would choose Radio as an alternate to the Noma experience, it would make a nice supplement for someone who planned his vacation better than me.

Radio
restaurantradio.dk
Julius Thomsen Street 12 (Near the Forum)
1632 Copenhagen V ^
Posted by Aaron at 6:24 AM 1 comment: