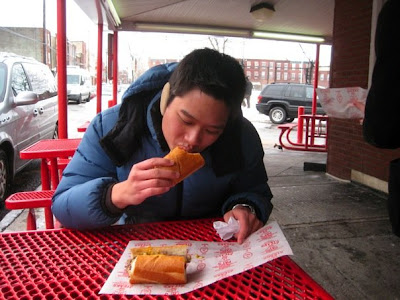 What better way to celebrate the birthdays of George Washington and Abraham Lincoln than with a cheesesteak taste comparison? Last weekend, I traveled by bus to a very unsunny Philadelphia for the authentic experience. 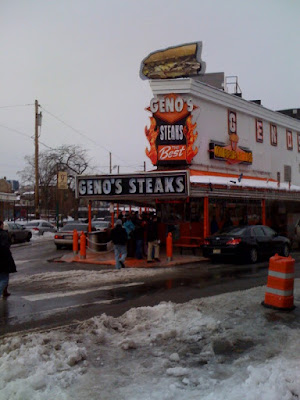 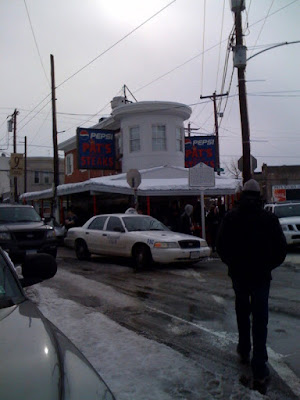 Pat's and Geno's have been cross-street rivals since the 60s. I'm sure there are loyal fans on either side of the match-up, but to a tourist in Philly, they appear equally well-patronized. Luckily, the lines move fast. Geno's looks like the Las Vegas version of a cheesesteak purveyor. Apparently, all the neon signs light up at night, drawing both hungry Philadelphians and moths alike. I could do without the glare and glamor, but it doesn't detract too much from the restaurant. What is more of a detractor though, is the severely xenophobic atmosphere. Under the guide of patriotism, the sign in the window says, "This is America, When Ordering Speak English." Four years after Congress renamed its cafeteria sides, Geno's still serves "Freedom Fries."

Pat's on the other hand, has a much more understated confidence in its exterior. The Pepsi sponsored signs are a bit of an eyesore, especially when the PEPSI logo is almost as large as "Pat's Steaks." I got the sense the Pat's was resting on its laurels as the birthplace of the Philly steak sandwich. A sign displayed in the rear warned me not to "eat a misteak." Both eateries consisted entirely of outdoor seating, though the kitchens looked more than ample for what they served. Both places had two ordering windows, one for sandwiches and one for drinks and sides. Both had the aggressive ordering style. Make sure you know how to order and have cash in hand by the time you get up to the window. Name the cheese (whiz is more "authentic", provolone, American) and either "wit" onions or "wit-out." In this expedited method, a Cheese Whiz steak sandwich can be procured with no more than two words--"whiz wit."

Pat's claim to fame is that the original founders, Pat and Henry Olivieri, were credited with inventing the steak sandwich. According to Pat's, the brothers ran a modest hot dog stand near the present location since 1930. One day, they procured some chopped steak from the nearby Italian Market and fried it on the hot dog grill with some onions. Placed a top an Amoroso bread roll, the Philly steak sandwich was born. The history of the cheese becomes much foggier. Even the Pat's website is unclear, "As the years passed, both employees and customers alike demanded change...cheese was added." Nonetheless, the most common cheesesteak is topped with Cheese Whiz, though Geno's might actually prefer sharp provolone. 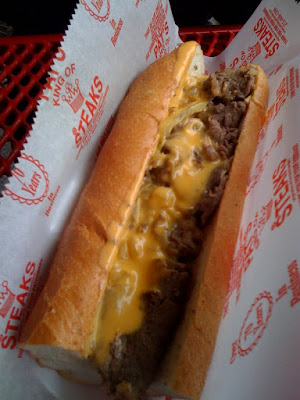 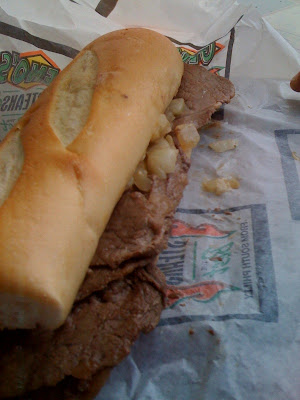 Now for the taste test. It had to be the same sandwich of course, so I opted for the standard "whiz wit" from both restaurants. Same bread, same slather of yellow mess, onions all the same, the sandwiches are fairly indistinguishable. It might have been my imagination, but I thought I detected a hint of peppers in the Pat's sandwich that was absent from Geno's. But the real distinction lay in the steak. Pat's, following tradition, chops its steak, while Geno's serves it sliced. This seemingly minor difference actually might have been the crucial factor. The Pat's steak was simply...dry. Sigh, an overcooked steak destroys the sandwich no matter how much cheese product is deposited on top. The taste test victory goes to Geno's.

A note on the prejudiced signs at Geno's. While this type of behavior does disturb me, I didn't experience any overt discrimination that would be enough to deter me from ordering a sandwich. I won't go as far to boycott the place for their close-minded viewpoint, but it certainly is a negative point in Geno's column. Still doesn't beat a good cheesesteak though.

While the sandwiches are good, I'd argue that neither Pat's nor Geno's is unique to Philly. There are plenty of places outside of the city that serve excellent sandwiches. They might not be authentic, and I'm sure I'll have dissenters, but these places can go toe-to-toe with homegrown talent. For one, Jersey Mike's makes delicious cheesesteaks that are much more accessible. Oh, and if you're in the neighborhood and not feeling like cheesesteaks (though I can't imagine why) there's a banh mi shop right next door to Pat's.

They are literally across the street from one another at E. Passyunk Avenue and S. 9th Street.

Amy Ruth's: My Secret Truth about Chicken and Waffles 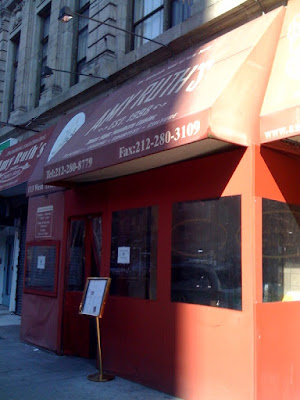 Having been to Sylvia's back in 2008, I was determined to try Amy Ruth's to compare the two. Javier, aka Teenage/Glutster, was in town and tired of being told to try the ramen. Instead, we met up in Harlem for some Southern cooking.

Soul food, a term typically describing cuisine associated with African Americans, developed in the 1960s. Much of its origins has roots in slave cooking, a combination of African techniques and ingredients and traditional throwaway foods of Southern plantations. As a result, much of the ingredients are untraditional and cheap, such as lard, chitterlings, pig's feet, collards, kale, and other offal. Since the food at the time needed to be calorically dense to sustain hard labor, soul food is commonly high in fat and sugar. This has led to some modern revision of traditional recipes with leaner meats and unsaturated oils. Personally, I'd rather keep the fatty hog jowls and lard and just cut back on the frequency of my soul food ventures.

When I glanced at the Amy Ruth's menu, I realized my embarrassing secret. Having lived in LA for five years, I had never gone to Roscoe's for chicken and waffles. I couldn't take it. For years I've had waffles and chicken, but never together. Even when the dining hall had instituted chicken and waffle night, I avoided the two combined. It seemed unnatural to me to combine them. I always had a natural aversion to eating breakfast foods outside of breakfast time, and I'd never eat fried chicken in the morning. To me, chicken and waffles would be like a tiger and lion fight. It would be interesting to see, but it would never happen because of the different habitats. Well here, at Amy Ruth's, I couldn't take it anymore. I had to make a stand here and get the fried chicken atop a crispy waffle. 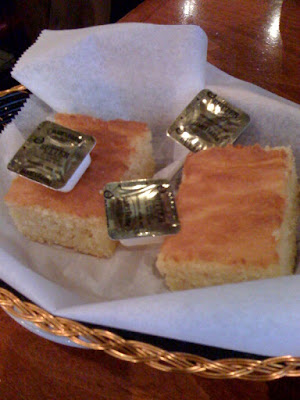 We started with cornbread that would've been leaps better if it had been fresh or recently reheated. It's tough for me to eat cornbread before a big meal though. I like my cornbread with a tab of butter and a drizzle of honey. While great as a snack, the sweetness would deter my appetite. The cornbread at Amy Ruth's was good, but nothing special.

Javier was a tad more adventurous than me on the entree front. We shared his salmon croquettes with a side of steamed okra and collared greens. The croquette surprised me. I was expecting more of a crab cake, but got something more like a chicken nugget instead. Steamed okra, as you can imagine, was gooey and lacked much texture beyond slimy. I would've preferred it fried. The collards though, they were amazing. Stewed in what must have been smoked or salted meats broth, they carried a deep meaty flavor. If parents can't get their kids to eat their greens, just make them taste like green fatback. 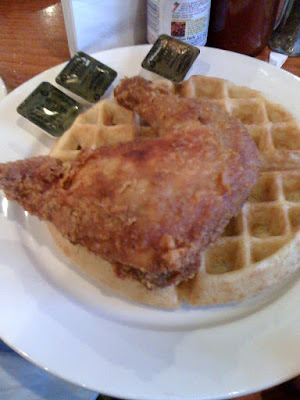 My plate came out. Here was the moment. But what was I supposed to do, pour the syrup on the chicken too? Luckily Javier saw the confused look on my face and told me to pour a little syrup on the chicken and try it first. I took cut off a piece of the fried chicken thigh. Nicely fried, not too heavy that you taste the grease, but still flavorful. But it was the moment I put the forkful of waffle into my mouth that I knew what Amy Ruth's was famous for. Their waffles was delicious, simply the best waffles I've ever had. As Javier described, you could taste the intricacies of the batter and the cratered syrup made me smile with satisfaction. I had way too much to eat for lunch. A side of coleslaw pushed me over the edge. If I came back, I'd stick to the waffles in hopes of living a little longer by avoiding the fried chicken.