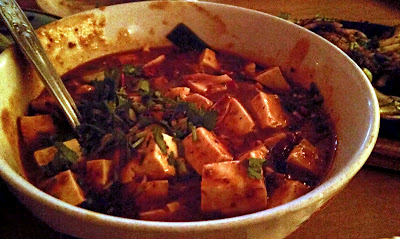 I've been hearing about Mission Chinese Food for some time now. This former pop up that eventually took over a non-descript family restaurant has made "best of" lists all over the country. When I found out that one of my childhood friends was working there, I made it a point to drop in. 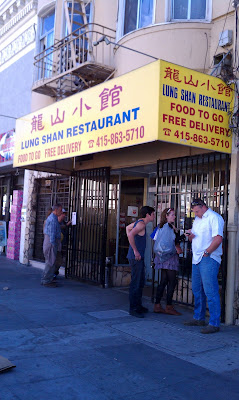 By now, Mission Chinese's storied past is already well documented, but Josh at Food GPS did a great write up last year on its history. From what my friend told me, Mission Chinese has completely displaced Lung Shan, though the former proprietors still staff the back. Instead, my American born Chinese friend was the only Asian face in the front of the house.

Though the decor still consists of the tacky Chinese decorations that adorn Chinese restaurants worldwide, there were some ambiance changes of note. I'm assuming that Lung Shan didn't play The Strokes over minuscule speakers to dinners in Christmas light dim illumination. Chinese typically brightly light their restaurants, in contrast to Western mood lighting. The result is that Mission Chinese has a clash of moods, forcing the Chinese decor remnants to take on an ironic meaning.

Now that the hype has died down a little, it's actually possible to get a table with a minor wait. I went on a Sunday and waited less than twenty minutes for a table for four at 6. Having an inside (wo)man didn't help me get to the top of the list, but it turned out not to be a problem at all. 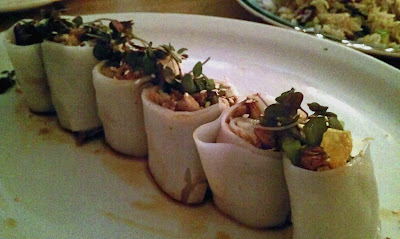 We started with the tea smoked eel rolls, Beijing vinegar peanuts, and hot and sour cucumbers as cold dish appetizers. While many of Mission Chinese's dishes were fairly traditional with some modern flourishes and ingredients, the eel rolls were unique to me. Unfortunately, my disdain for celery did not overcome the rest of the dish. 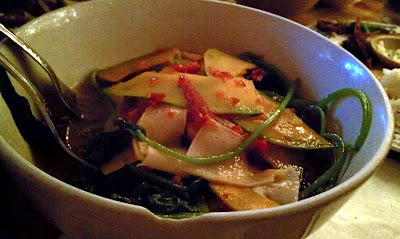 The above pictured ma po tofu is an example of the more common Chinese dishes with a little flair. Like the thrice cooked bacon, the ma po tofu had multi-layered flavors. So much of Asian fusion often boils down to adulterating Oriental cuisine by making it much too sweet. I didn't get that impression here. The thrice cooked bacon, which I imagine was derivative of twice cooked pork belly, consisted of amalgamations of tastes. I could get a savory sensation biting in, a smooth mouth feel of umami, then a lingering numbness due to the Szechuan peppers. The wild pepper leaves dish felt familiar enough to be identifiably Chinese, but yet it had a smokiness that I associated with Southern collard greens. It was flavor combinations like these that kept every dish exciting.

That's not to say the more "traditional" dishes weren't stellar as well. For $11, you can get a heaping of
Posted by Aaron at 10:26 PM 1 comment: