Why The French Laundry Matters 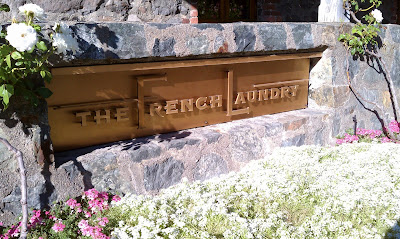 It doesn't take long for a culinary tradition to emerge. Tradition is not measured merely by the passage of time, but by the tenacity of how a practice is preserved. We commonly see "tradition" at the more prosaic end of the dining spectrum--annual clambakes, family recipe dry rubs, chili cook-offs. So often, high-end dining chases innovation, caught in fads and burning out once the public tastes shift. We've all seen the latest "it" restaurant filled to the brim one month and empty the next. While there is a place for these restaurants to push the envelope, there's also a need for classic stalwarts that maintain quality and consistency of cuisine. The latter is where The French Laundry fits, and that is why it is still relevant even so many years after the height of its acclaim.
More... 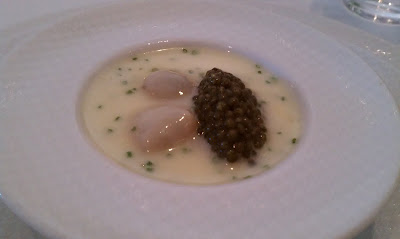 At this point, a play-by-play review of The French Laundry would add little value. The Internet is littered with such, accompanied by photos much better than mine. I could wax poetic about the "oyster and pearls", how the savory sabayon coats your mouth, punctuated by the salinity of the caviar. I could go describing how the balance of spherical textures between the tapioca, caviar, and oysters gives the dish tactile variety that causes the flavors to linger as the orbs rolls around your tongue. Or I could simply direct you to the hundreds of reviews of this classic dish already permeating the ether.

As of this writing, there are 1,155 reviews on Yelp boasting an impressive 4.5 stars. Most of the one-star reviews are from people who've never even dined there. Common complaints are centered around the difficulty in securing a reservation. Indeed, it took an inside connection for me to manage my own, despite calling two months in advance (the earliest reservations are available). The other related protestation is related to the pretentiousness of the restaurant and its patrons. Spurned customers are a vocal group, especially when they don't even have the opportunity to pay the $270 for a meal.

I understand these complaints, but as one tumblr describes, Yelp enables anyone with an Internet connection, enough money for a meal, and a sense of entitlement to spew their vitriol. Yelp is a democracy; it is ill suited for The French Laundry, an institution that has never been about inclusiveness. What makes The French Laundry special is its exclusivity. If you want to dine there, you need to make a serious effort. Michelin describes three-star restaurants as those that are worth making a special trip for; that is indeed how you need to approach The French Laundry. Make your reservation, then book the flight. 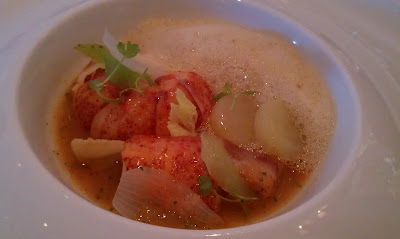 Of course, merely exclusivity doesn't make a great restaurant. Among people who have actually eaten at The French Laundry, many of the complaints I hear are about how it isn't that unique. Looking purely at the cuisine, I agree that some dishes were overseasoned or unbalanced, especially the braised Kurobuta pork jowl. But these misses were minor compared to the transcendent sweet butter poached lobster in a tomato bullion, or the best white peach sorbet I've ever had. Innovative uses of global ingredients kept the flavors varied. When the lobster needed a spicy kick, the chef went to Szechuan peppercorns for a numbing heat rather than something more traditional. Was the food the best I've ever had? Probably not, but The French Laundry experience isn't just eating--it's dining. 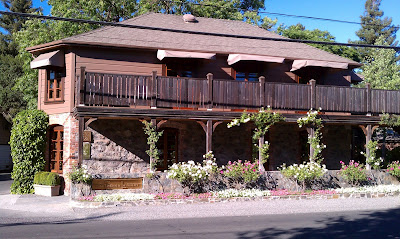 As you can imagine, the restaurant has a certain type of clientele. Most people who aren't already eating at this caliber restaurant can't even get a reservation. It caters to the people who are there, not to the people who want to be there. Speaking as someone with one foot in that door, who has his share of fine dining experiences, I was still surprised at the level of service and detail. The six top next to me stayed vacant for at least one seating, but rather than rush a dinner, the restaurant would rather keep it empty. There was a sense of no compromise. It was a place designed for special occasions. With the waiters speaking so softly and such small dining spaces, it was among the quietest meal I've had out. Intimate dining at its peak.

What's truly amazing is The French Laundry's staying power. While some other famous restaurants like Spago can remain quality dining options, they haven't been able to consistently top best dining lists year after year. Other chateau-type restaurants have emerged in America, but The French Laundry will always be the epitome by which these restaurants are compared. It defines Napa Valley and Northern California cuisine. It is the three-word answer to American fine dining, and that's what creates a legacy. ^
Posted by Aaron at 6:49 AM 1 comment: