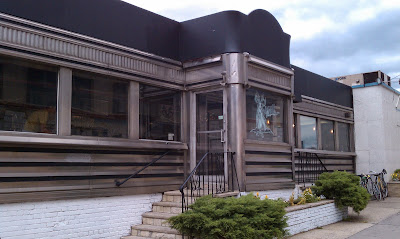 If you ever follow @samkimsamkim when he's in New York, you'll see all the amazing places he checks into on 4 Square. Despite living here, I can't keep up with all the new joints like Sam can. So when I had the opportunity to join him for a day, I met him up for lunch at M. Wells in Long Island City.
More...
Riding the 7 train out of Manhattan, I realized that this would be my first foray into Queens that didn't end in either Flushing or at JFK. There was a huge stretch of train stops that I've ignored as I've made the trek for Chinese food in the past. M Wells is right on top of the Hunter's Point stop on the train, actually very close to Manhattan. In fact, I was confused looking up directions initially because the directions only told me to get off the train and abruptly terminated. It took several minutes to figure out that the last step really was no more than walk outside. 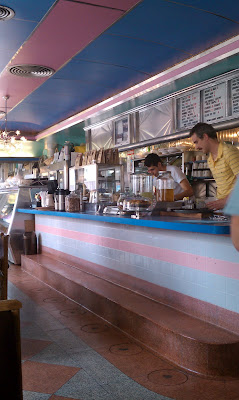 M. Wells is in a retrofitted diner, opened by a husband-wife team from Montreal with training at Au Pied de Cochon. The concept is bringing simple Quebecan food to common American diner fare. Hot dogs, hamburgers, and hash shared the menu with foie gras, lobster rolls, and pickled pork tongue. I ordered a spiced lemonade while Sam and I decided on our lunch. 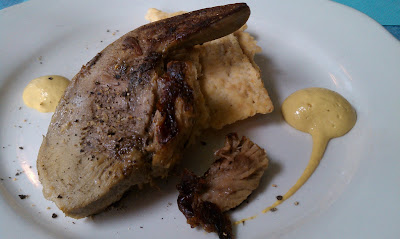 I'm Taiwanese. Spicy duck tongues were one of my favorite small dishes as a kid. I'm Californian. I always appreciate a good lengua taco. This was my first encounter with pickled pork tongue ($6) however. Considering I've taken part in ritual decimation of pigs before, it was odd that I've never had tongue. For $6, I was surprised how large it was. It would be too odd to make a meal in itself, but the pickled flavors permeated the meat and did not taste anything like beef tongue. Not bad, and seeing as how I have no reservations with offal, I would order it again in the future. 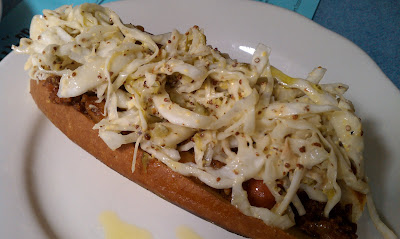 After reading the Serious Eats review of M. Wells, I knew I had to order the hot dog with sweet bacon chili and slaw ($5). My favorite dog at Pink's in LA was the coleslaw dog. While this hot dog lacked the traditional snap in the casing I use to judge hot dogs, the sweet chili put it over the top. I found myself scraping the plate for the remnants of chili. Good price for a gourmet dog, though it wouldn't be enough on its own for a meal. 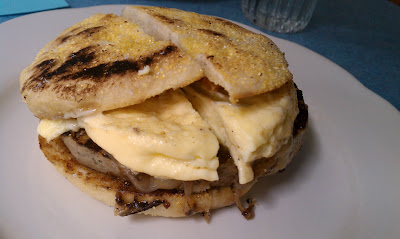 Sam pointed me to the first item on the menu, the one he had heard the most raves for: egg-sausage sandwich with cheddar, tomato, pickled jalapeño, on an English muffin ($8). This mammoth of a breakfast sandwich would be more than enough for a satisfying lunch. The pickled jalapeño added less of a kick than an intriguing contrast in flavor. My problem with scrambled egg sandwiches is always the overdominance of egg, and typically bad egg. There was none of that here; it's certainly worth ordering.

As of this writing, the restaurant is only open for breakfast and brunch until 4 pm Sunday-Thursday. It serves quintessentially lunch food, but given the time it takes for the food to come out and the location, it wouldn't be pragmatic for office workers to make it out for a trip. I'll probably come back when they start serving dinner, but for now, I'll recommend it to anyone looking for a great lunch in New York.