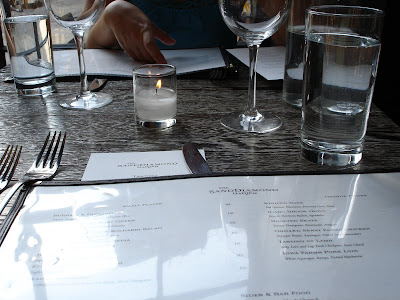 Admittedly, I haven't done nearly as much legwork on the NYC dining scene as I did when I was in LA. Somehow not having any income puts a damper on dining experiences. Go figure. Additionally, I live so far uptown that whenever I tell people I'm in Morningside Heights, they stare at me blankly and reply, "You mean Harlem." Well sure enough, when I found out there was an upscale restaurant within walking distance, I made sure to give it a try.

As I mentioned, having done hardly any research into 5 & Diamond, I had only vaguely heard that some famous chef was at the helm. I noticed the young, bearded man walking to and fro carrying ingredients, but didn't make the connection until I got home. Of course I also didn't realize all the drama that has attended Chef Ryan Skeen. Regardless of the chef's personality, if he can cook, I'm coming back. 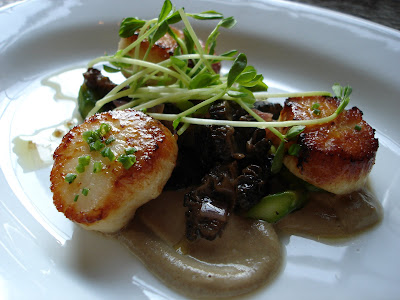 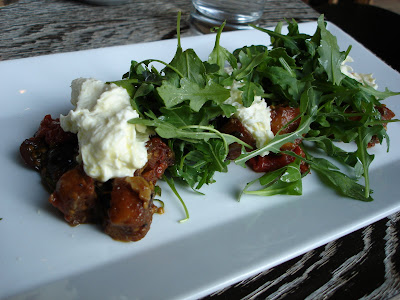 The burrata and panzanella with tomato, arugula, melted eggplant, and nicoise olive was huge for a small plate. Unfortunately, such a large dish lacked substance. With something like this, each ingredient has to be able to carry a flavor load on its own and I wasn't getting enough from each disparate piece. In short, no unity of taste. 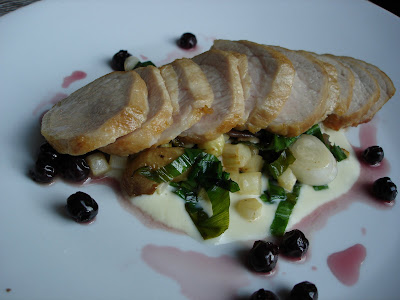 Iowa Farms Pork Loin with white asparagus, ramps, pickled blueberries. Does food automatically taste better if you reveal the origin of the ingredients? At first, I didn't think that Iowa Farms would be worth mentioning, but apparently it is. It's good to see independent farms. Doesn't everyone hate industrial agribusinesses? The loin was indeed tender and the accouterments were clutch. Pickled blueberries were a clever way to bring in the sweet along with the tart. This dish would have been been improved by some browning however. A few grill marks would've done wonders. 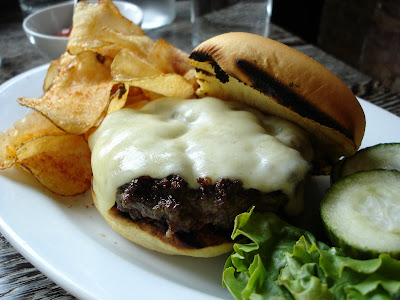 The Burger. That's all it's listed as on the menu. I may not have done much research, but I at least knew this was the burger that Chef Skeen had perfected at Irving Mill. A house-ground combination of beef cheek, flap steak, and pork fatback, the flavor was much more porky than beefy. It made for a juicy burger that certainly stayed on my lips for quite awhile, but lacked the deep beef flavor of Minetta Tavern's Black Label Burger. The waiter mentioned that the chef was experimenting with chips instead of the usual fries. The chips came with a barbecue seasoning fairly typical for barbecue chips. They will leave me forever wondering whether Skeen does his fries thick or thin. 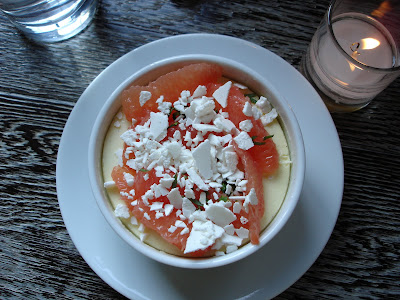 Would this be considered deconstructed cheesecake with grapefruit, meringue and tarragon? Is it deconstructed because it is a cake in a bowl with no real crust? I'm never quite sure what the term "deconstructed" means, but since so many people use it, I'm going to go out on a limb and apply it to my dessert. Having no crust, the cheesecake would've lacked that signature grittiness that all cheesecakes have as the crust gets macerated along with the cheese filling.

Having heard all the news about Skeen's issues with the front of house staff, I would note that the service tonight was clumsy and sophomoric. The waiter didn't know the food well enough; he couldn't tell me what kind of cheese came on the burger. Another table asked him what "ramps" were and he was at a loss. Normally that is not such a huge problem, especially if he just admits he doesn't know and comes back later with the answer, but two in a row reflects badly on the restaurant. I was also the only table at the restaurant for about 45 minutes and still had to wait quite awhile for my food and drink service. This little service issues can certainly be ironed out and weren't bad enough to detract too strongly from the food, but I would be hesitant to come on a busy night when the waiters have even more of a challenge to juggle.

I'll come back for the food. But I'll come back just to support these kind of restaurants. There aren't enough upscale dining options in Harlem, and since downtowners lumps me in with the neighborhood, I should do my best to support it.

What Is "Ethnic" Food? 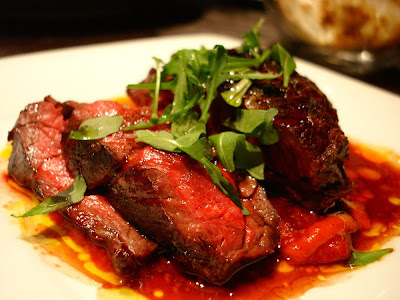 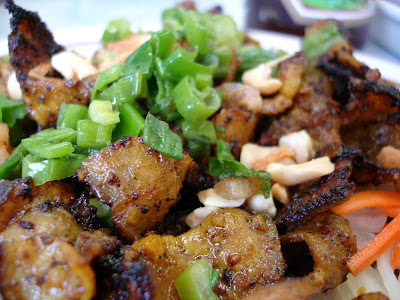 Steak vs. Fried Goat Udders - Which one seems more ethnic?

What is ethnic food? Is it anything foreign? America prides itself on its cultural diversity. This melting pot of…well, melting pots, is home to almost every type of cuisine on the planet. Yet how is it that we have a limited ideal of “American” foods as burgers, pizza and hot dogs. Or maybe for the more liberal, American food is anything that is fatty, salty or too sweet.
More... 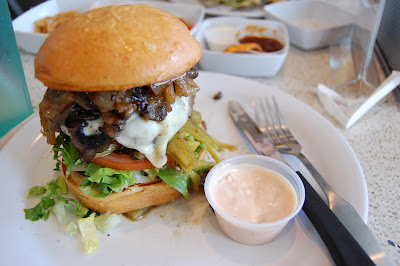 Burger from The Counter - pretty safely not ethnic

The term “ethnic food” is ambiguous. We tend to have a good idea of the foods on either polar extremes of the line. Despite the cultural origins on many of our favorite foods, some of them are unabashedly American now—French fries, steak, and apple pie come to mind. On the other side, foods associated with exotic locales like Thai or Ethiopian are pretty clearly ethnic. Problems occur on the line as America assimilates more and more into its mainstream cuisine. Do people consider Italian food ethnic? Maybe if you were eating sweet corn agnolotti, but spaghetti with meat sauce is about as American as it gets.

More perplexing is whether soul food is considered “ethnic.” Some aspects of soul food are reflexively American like mac ‘n’ cheese or fried chicken, but what about chitterlings and pigs’ feet? Classifying soul food faces the uncomfortable question of whether being American means being white. But for many Americans, especially away from the Deep South, soul food is just as foreign as pad thai. 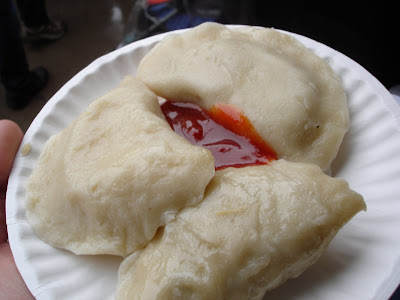 What about food that is undoubtedly white but just never made it big in America? Polish pierogi are just rare enough to be ethnic, but kielbasas are as common as tailgate parties. Would you therefore say that Polish food is ethnic?

Of course there are also those who describe ethnic when they really mean authentic. And by authentic, they mean non-Americanized. I could take a friend out for Chinese food and depending on what we ordered, you could say it was both ethnic and not. Sweet and sour pork, eggrolls, and chow mein just don’t seem that foreign for most of America these days. Tacos might bring to mind images of haciendas and senoritas, but burritos resonate with gas station microwaves and Taco Bells.

More likely, we associate American food to cooking styles. Barbecue is an American institution. Grilling, also very American. We tend to like fire, and lots of it. And of course, only in American will you find deep fried Coke and KFC Double Downs.

Or is it something inherent in the culture of the food that makes it American. Do we associate ourselves with cowboy independence and self-subsistence? Maybe we identify ourselves as the big beef eaters, preferably wrapped in bacon. Unfortunately, for some, being American is about being bigoted and self-righteous, in which case, “Hello, Freedom Fries!”