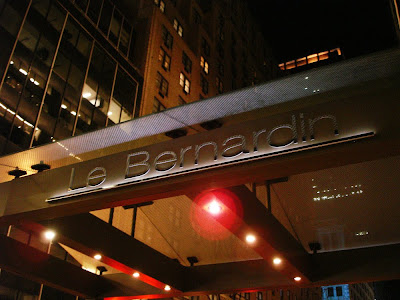 There is something refined and high-end about seafood that can't be matched in fine dining. Even fancy steakhouses like CUT lack a sort of sophistication that comes with fish. Meat is best at its most primal, earthy and bold; while fish is best at its simplest and freshest, the delicate cooking techniques associated with aquatic critters requires a gentler touch. So when I want a truly elevated dining experience, I still look to seafood to fill that desire. In Los Angeles, that gap was filled by Michael Cimarusti at Providence, in New York, the honor goes to Eric Ripert and Le Bernardin. 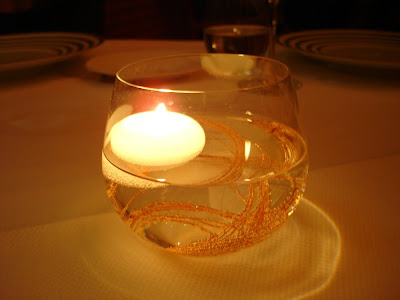 I was excited. This was the first time in months that I had treated myself to an expensive dinner. Settling back into a student budget has been a real burden, especially with a whole new city of eats to indulge in. When my friend Danny, aka KungFoodPanda, told me that I had to join him for at least one fancy dinner, I picked Le Bernardin out of Eleven Madison Park and Per Se. Sorry Chef Humm and Keller, my stomach and my wallet would go to Chef Ripert this time. Entering the restaurant, I was somewhat surprised at the size of the dining room. As usually the case, I somehow conflated quality with size in my head and imagined an immense dining room covering multiple floors and dozens of tables. But no, the main dining room, while large for a Manhattan restaurant, wasn't particularly spacious. It certainly felt comfortable though, with soft lighting against the wood paneling and scenes of tranquil fishermen along the walls. 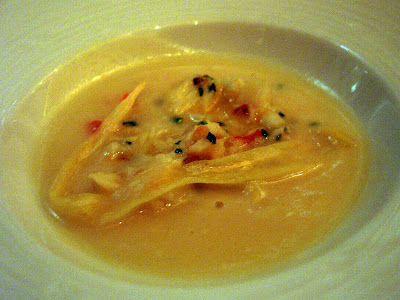 Danny and I sat down and decided to split both the regular tasting menu ($138) and the Chef's tasting menu ($185) for a total of fifteen courses between the two of us. The waiter brought out the amuse, a seemingly simple crab and lobster salad. I expected a cold dish, something refreshing to prepare the palate, but the waiter poured the cauliflower soup which swirled around the seafood and warmed the plate. Bringing the spoon to my face, I was hit be a fragrant aroma of crab. While I expected it to be thick, almost too creamy to imbibe in large quantities, the soup was thin but kept enough weight in flavor. 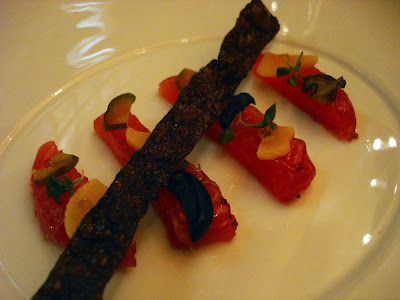 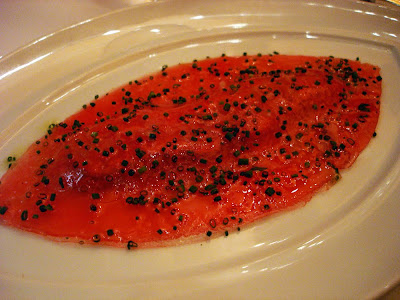 On with the first course. Both menus served a tuna dish, though the preparation was so different they hardly resembled each other but for the ruby flesh of the yellowfin tuna. For clarity, I will label each the menu for each dish, but I will review the courses concurrently to compare and contrast. The smoked tuna had a firm texture, much closer to a medium-rare steak than I expected. The pickled vegetables, takuan, had a contrasting crunch. I preferred the thinly pounded tuna which resembled a large sheet of crudo. It was larger than I expected for a course, but the toasted baguette underneath the center of the fish was a fun discovery as you sliced your way through the tuna. First course goes to the Chef's menu. 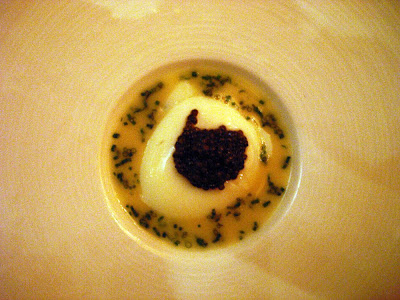 The Chef's menu had eight listed courses compared to the Le Bernardin menu with seven. This egg dish was the odd-one-out. Poking into the white of the egg, watching the yoke swirl out into the plate, I was reminded of the quail egg at Torihei in LA. The English muffin toast (not pictured), was more like a toast stick, small and narrow. Dipped into the egg yolk, the combination of the cheesy toast and the egg reminded me of breakfast. 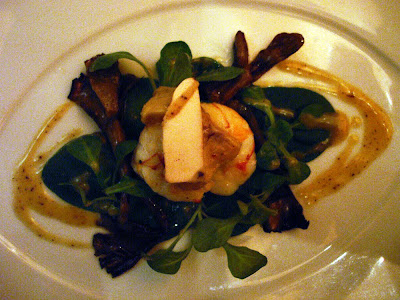 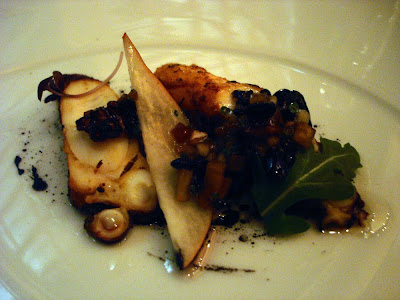 My personal history bias has given me distaste for black bean sauce as memories of my dad serving Chinese canned fried dace with rice for dinner. Instantly, the octopus dish loses this course. But besides the black bean sauce, the octopus was braised and then charred, which gave it an unusual texture more akin to skin than octopus. It wasn't tough at all, tender enough to be cut by a butter knife. The langoustine (a type of Nordic miniature lobster) was one of my favorites of the night. Oh foie gras, how I'd missed you. 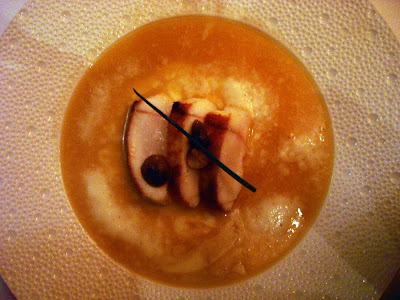 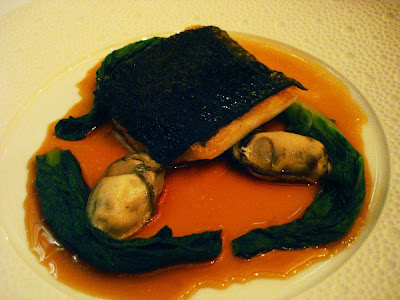 I'm not sure of everyone else's affinity for ray fishes, but skate always creeped me out. I have nothing against monkfish for being ugly, but skate are just too weird for me. The monkfish had a crispy skin full of flavor that stayed with me throughout the dish. While the ginger-sake broth added something in the form of layers, I don't know if it added that much to the fish itself. The skate had an interesting "skin" of nori. I'd say the most interesting component of that dish however, would be the oysters. Small, sweet, the oyster bore pearls of flavor. I noticed there were quite a few Asian components to this course. I loved the shimeji mushrooms on the monkfish, but frankly ponzu is overused (as is yuzu for that matter). 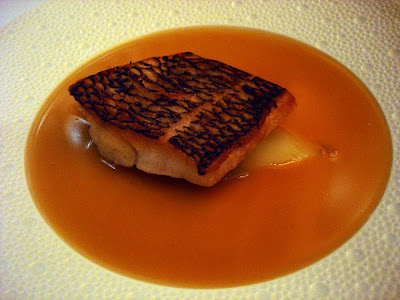 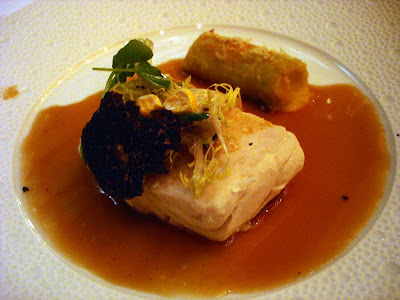 The celery-parsnip custard came separately from the black bass. I tried eating it alone. I tried pairing it with the fish. Either way, I didn't see the need for the custard. It resembled more of a parsnip foam than a thick custard. The peppercorn sauce had a velvety texture that started to form a skin two minutes after being poured into the plate. For this course, I preferred the striped bass of the regular menu. While the fish was good, but plain, the corn cannelloni, which resembled a tamale, added some welcome sweetness. 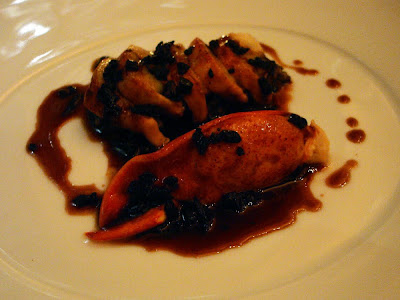 Looking at the descriptions of what I'd called the main course of each menu, it's hard to pick between the two. The surf and turf is separate from the lobster. In fact, the "surf" part is actually a whitefish escolar, commonly mislabeled as butterfish. I didn't care much for the fish, but the Kobe beef was probably the best Kobe I've ever had. This rich butter beef can possibly only be served one small sliver at a time so as not to overwhelm the beef receptors in your mouth. Also, I enjoyed the Japanese eggplant fritters, a style of preparation I've never seen. Now I think I might always have to eat my nasu breaded and fried. The lobster wouldn't go down without a fight though. The description is opulent; three of the fine dining heavy hitters all present: lobster, truffles, and foie. Putting all three elements together however didn't allow any one ingredient to shine. Worse yet, they were all covered by the sauce. Great dish, but not as good as the surf and turf. 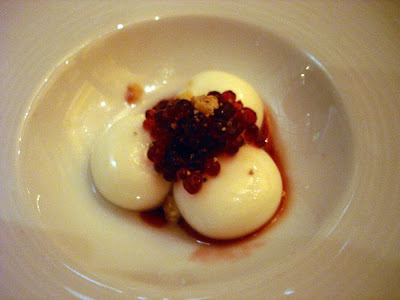 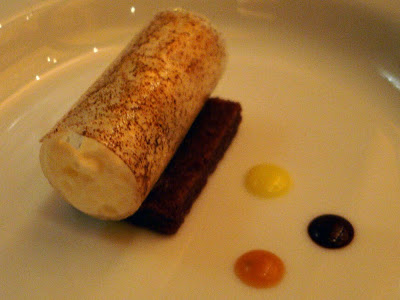 Pearly balls of mochi. That's what the chèvre reminded me of. As a fan of goat cheese, I was looking forward to this pre-dessert course. However, I didn't expect the consistency of the spheres to be so soft. They were chilled, very delicate to the touch. Unlike regular goat cheese, which is often thick and weighs you down, this cheese was almost liquefied. Mascarpone apparently is not really a cheese at all. Instead, it is cultured crème fraîche. You'd probably be most familiar with it as a main component in tiramisu. This dish presented the mascarpone creatively in a tubular sugar shell with three drops of dipping sauce. Of these two pre-desserts, I'd narrowly prefer the chèvre though. 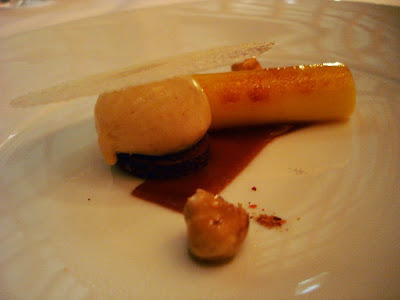 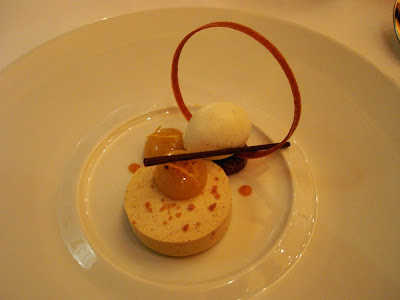 Spherified liquids, a constant in molecular gastronomy, always captures my attention. At Providence it was gin and tonic. Here, Ripert prepared pear juice in a thin skin that burst in your mouth. Combined with the parfait and a dash of the sorbet, this dessert hit the spot. The corn custard and hazelnut praline had good component parts, but nothing that came together to form an experience. 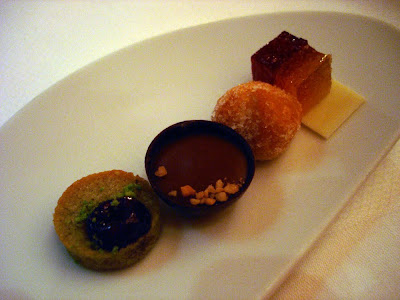 Perhaps my favorite set of mignardises I'd ever had, it could have only been better if there was a macaron or two in there. From left to right, pistachio cherry cookie, chocolate hazelnut cup, lemon beignet, pomegrante gelee on coconut. Smallest beignet I'd ever seen, but when do you need that much beignet unless it's paired with chicory coffee. The chocolate cup had a cold molten center, as if that oxymoron is possible. 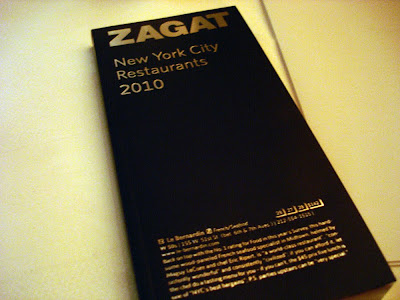 We got to walk back to the kitchen and meet Eric Ripert before the meal. He was heading out at the beginning of our reservation, so we were lucky to catch him before he left. I told him I watched his toaster oven videos; he seemed surprised anyone had even heard of them. The staff was friendly and knowledgeable, as you'd expect from restaurants of this caliber. When we asked for a copy of the menu at the conclusion of the meal, they gave us each a complimentary copy of Le Bernardin personalized 2010 Zagat guide. A nice touch, showed that they always had marketing in mind. This was certainly the best meal I've had in New York thus far. I highly recommend the restaurant; and if all the other reviews I've seen are any indication, they consistently keep that quality up. 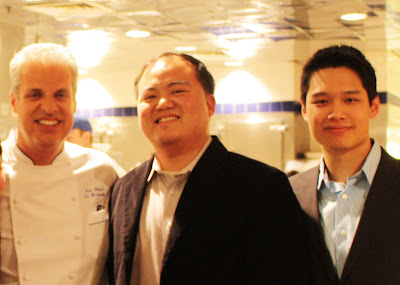 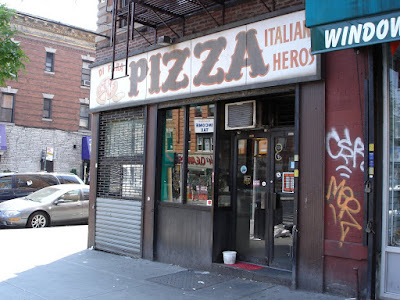 Plastered on the walls of the smoky interior of a little pizza joint in the Midwood neighborhood of Brooklyn are years of praise lavishly bestowed on Domenico DeMarco, proprietor and still principal pizza preparer. Since 1964, DeMarco has stood guard over the gargantuan oven with dough in hand. So why is the joint called Di Fara when it has always been DeMarco as the stalwart pizza maven? His original business partner was named Farina, and a portmanteau of their names became the famous Di Fara. 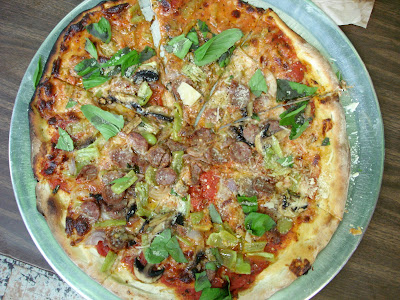 Now most people who pride themselves on NY pizza perspicacity will have much to say about Di Fara, but outside the NY circle, large as it may be, Di Fara has not reached the fame of some of the other pizza places. I theorize that this has nothing to do with the quality of the pizza, but rather on the refusal for DeMarco to scale up his operation. The pizza procuring procedure is Byzantine at best, and arriving with a guide is not a bad idea. After waiting the requisite wait in the line that forms outside the restaurant at all hours, make your way up to the counter and choose from the $5 slices or opt for a ~$30 pie. Someone, likely one of DeMarco's children, will write up your order on a scrap of paper and simply call you when it's ready. The additional wait for the pizza could take quite awhile, but you should make sure you return in time, lest your pizza be presented to another patron. 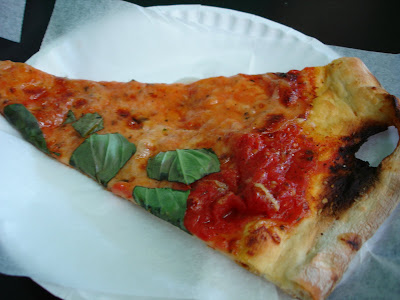 $5 for a slice of pizza. Expensive, yes, but Di Fara doesn't fail to bring in the crowd. Since I didn't make the trip out to Brooklyn too often, I had a slice of the thin, a slice of the deep-dish, and another thin crust pie. While utterly delicious, the pizza was undeniably oily. And though DeMarco might be making each pie himself, there were issues with consistency. Some crust comes out burnt, some too soft. The ingredients are tossed on capriciously by hand, though I'll admit there might be some sort of strategic topping placement that I didn't perceive. As you can see, the pizza is not much to behold, and from experience, I can tell you that next morning cold Di Fara's isn't nearly as appetizing.

Given the long wait, hassle of ordering, cost, and inconsistency, I can see why Di Fara is often a hit or miss for pizza pilgrims. Still, if you're comparing the best pies in town, you can't leave out Di Fara as a contender.