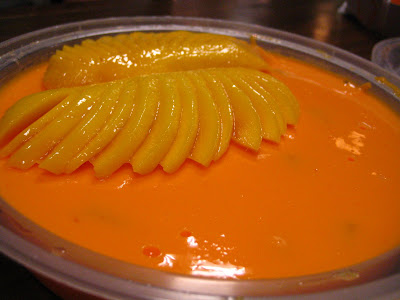 Arriving in Hong Kong at six in the morning, of course my first meal was an early dim sum near my aunt's house in Ho Man Ting. However, as with most meals on my month-long trek, I would be sharing with too many people to impose my food photography on them. Therefore, I neglected to document my dim sum experience, which if you're in Hong Kong, is certainly a must. I'd say aim for the dishes that you don't see in America, but even the Occidental stand-bys are outstanding. I did however, capture my first Hui Lau Shan trip.

Hui Lau Shan is a major dessert chain throughout Hong Kong. There's even a location in San Francisco stateside where it's named Creations Dessert House. But it's readily identifiable by the three golden words hanging over its door. In Hong Kong, you'll see them as commonly as Jamba Juices here. Enter any of them and you're greeted with a myriad of mango mixtures, but I wanted to try the pudding as original as it came. 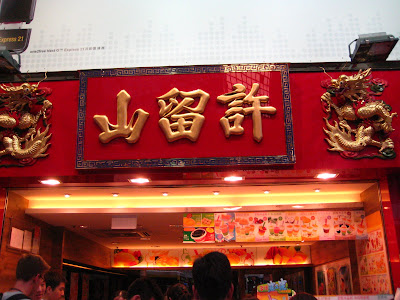 My friend who spoke Cantonese actually ordered the pudding. We were a group of five people, but the cashier only suggested two orders. I figured with the diminutive sizes of Asian dishes, two may not be enough. After a ten minute wait, we realized that the gigantic saucers of golden agar would be more than enough. About 8 inches in diameter, 2 inches thick, and weighing a pound each, the mango pudding is certainly a meant to be shared. Though I suspect there is a smaller order for one.

Since we were in the Causeway Bay area of Hong Kong island, we walked to the Times Square Mall and sat in the food court. There, I poured on the condensed milk, a dessert ingredient we'd encounter many more times before this trip was over. 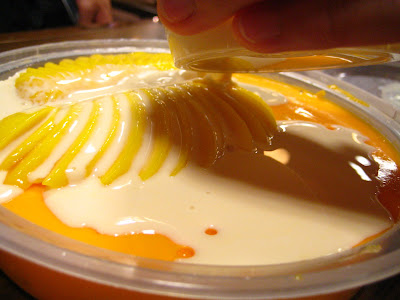 I was already expecting much before my first spoonful. Seeing the mango crates outside the store, I knew that they used fresh mangoes in their desserts. And looking at their menu, mangoes are what they do best. Most of the puddings, ice creams, drinks and other concoctions contain mango in some form, often fresh. A key element that I saw all over Asia, is that the mangoes they use are the yellow, slightly tapered mangoes. Avoid the large green and splotchy red ones, as those tend to have less flavor. I've heard the yellow ones have shorter shelf-lives, making them less marketable. You'll find them commonly in Asian or Hispanic market. I've bought a crate of them before off a Latino guy on the street. My experience is that American grocers tend to only stock the hardy green ones. Besides that little description, I can only point you to Wikipedia for a full list of mango cultivars.

Next time you're in Hong Kong, be sure to look for those three golden words. They'll guide you to dessert heaven.

Walking through the Slanted Door to Vietnam 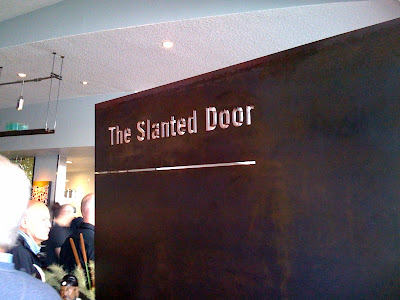 Pending my trip to Southeast Asia, I thought it would be intriguing to compare high-end San Francisco Vietnamese food with the street food I'd enjoy on the street of Saigon and Hanoi. Now that I'm back from my trip, I can give a fair comparative review of The Slanted Door. 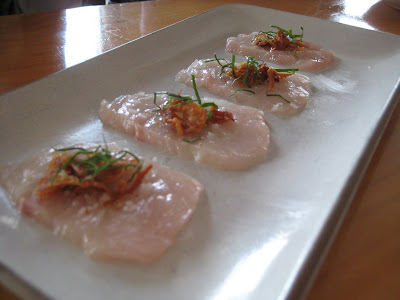 The meal started with an offering from the raw bar. Although the oysters, kampachi, and Japanese Yellowtail with crispy shallots and Thai basil (pictured above), didn't seem like Vietnamese dishes. But I had accepted that prior to walking into this hip San Francisco joint. If anything, the menu tended to have fewer fusion items than I expected. The yellowtail were the best items of the night, though the appeal was still not Vietnamese. 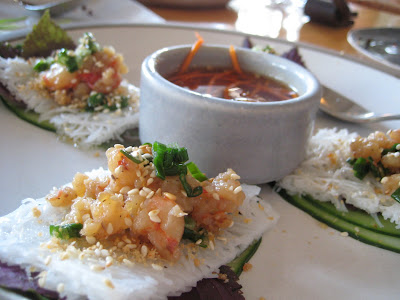 Our more cuisine specific dish came in the form of a banh hoi wrap of sauteed shrimp, parilla leaf, cucumber and vermicelli. My meals and talks with Wandering Chopsticks had given me and introduction to Vietnamese food that doesn't come as rice noodles in a bowl of beef soup. Though messy to eat, each bite tended to spill shrimp all over my plate, the morsels would've been just as good playing center-stage as an entree rather than an appetizer. The five-spice quail with pickled cucumbers had good flavor, but led me to a conclusion about the tiny poultry. Quail in general doesn't have nearly enough meat to be worth the trouble. And in a nice, Western restaurant like this, I wouldn't stick the whole bird into my mouth and pull out the little bones. Confined to a knife and fork, there was too much meat to leave behind to warrant ordering quail again. Contrastingly, in Vietnam, I could pick at the little bird with my fingers and teeth and leave it glistening as though vultures had their way with the carcass. 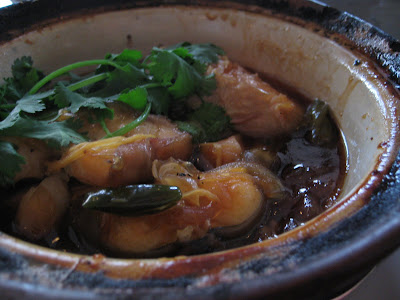 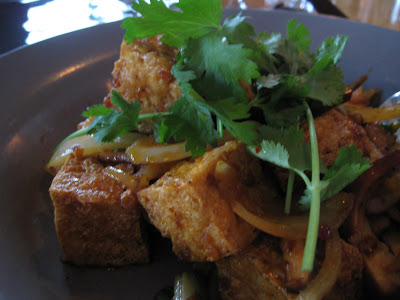 Hodo Soy Beanery organic lemongrass tofu, shiitake mushrooms, onions, chili sauce
With the first round of courses finished, the entrees came family style. Besides the above two, I also ordered Niman Ranch filet mignon shaking beef with watercress and lime dipping sauce, grass-fed Anderson Ranch lamb sirloin, and cellophane noodles with Dungeness crab. I made sure to include all the adjectives for each dish since Slanted Door prides itself on its fresh and local ingredients. After taking a cooking course in Thailand, I really understood the difference that fresh, quality ingredients make. Though maybe it was too fresh, the catfish felt somewhat sandy. For the luc lac shaking beef, the cubes were too large to be properly marinated. The restaurant may have been trying to showcase their beef by presenting large enough pieces to feel the texture of the meat, but I think it overshot the concept of shaking beef altogether. Neither the noodles nor the lamb sirloin had any distinguishable flavors. 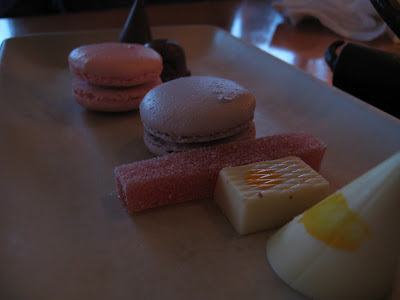 The dessert offerings were impressive, perhaps reflecting a French trained pastry chef. Though there were several Pacific-leaning desserts, I fell for the tray of mignardises. Macarons are always my sweet spot, but the passionfruit gelee had a certain appeal too.

Satisfied with the classy Vietnamese offerings of the States, I ventured off to Asia for some low-end food. Something dirty and cheap. I walked out of the restaurant, full and eager for my adventure. I took a picture of San Francisco to take with me to Hong Kong, Vietnam, and Thailand. 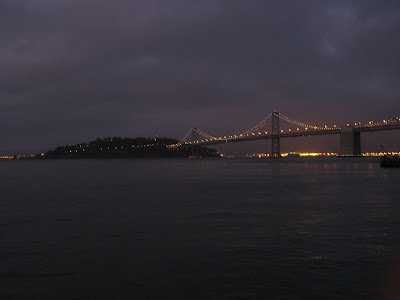 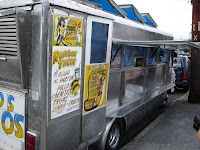 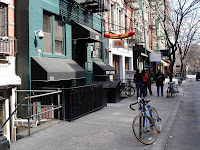 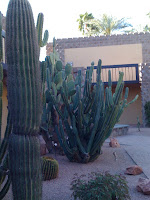 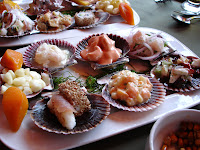 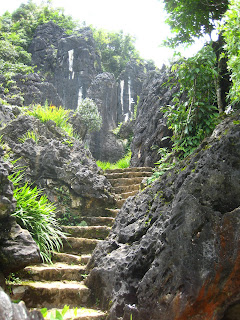 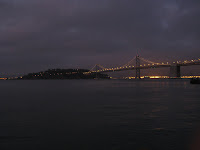 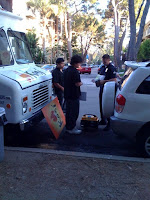 Kogi's Karmic Fail: An Introspection into Food Fanaticism
Childhood Memories of Wonton Noodles
What Does It Mean to Be a Blogger?
Los Angeles: City of Food Angels
Chocolate Skittles
Creepy Crawlies for Green Cuisine
Delicious Veal
Please De-fuse My Sushi
Late to My McMeeting
Molecular Gastronomy = Cooking?
Reed's Ginger Candy
Rise of the McDouble
The VGT Omnivore's Hundred
White Meat Society
Why Locavorism is a Pipe Dream
Cooking and Recipes 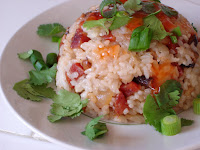 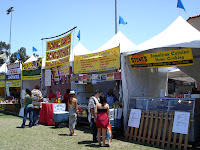