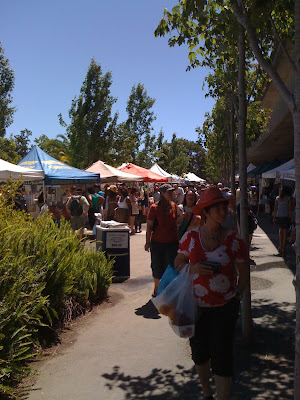 Temperatures in the 80s are considered fairly hot in Oakland. In the shadow of the 580 freeway, cooled by a breeze coming off Lake Merritt, I checked out the Grand Lake Farmers' Market for the first time.
More...
Sad that I missed the Big Apple Barbecue Festival while I was back in California, I took a trip to Lake Merritt instead. I had made it a habit of frequenting the farmers' market near my apartment in New York on a weekly basis. Getting to know the vendors makes the experience rewarding, even if I'm paying more. It's best when they know their stuff and they can tell you everything about their product. I've learned much about duck, pickles and mushrooms this way. I knew there was a small farmers' market in my hometown of Alameda, but since I was missing out on pulled pork, ribs, and sausage, I figured I needed to go big to alleviate my malaise.

While parking was a headache in the lot, a few blocks away I found street parking. I quick walk along the lake was actually quite pleasant anyway. There were dozens of stalls. Most sold fruit. I saw a meat vendor, maybe some seafood too. A large number of stalls were actually selling prepared foods like olive oils, cheeses and jams. A separate section had several food stands. A quick glance revealed some Thai and Afghan food. Mediterranean also seemed a big hit.

One great thing about this market was the availability of samples. Almost every stall had little toothpicks flagging down the customers with their sweet and savory flavors. A great sample of peaches netted a purchase from me. But besides that, most things were understandably expensive. In all, the market was about one-third to a half of the size of the Santa Monica farmers' market. 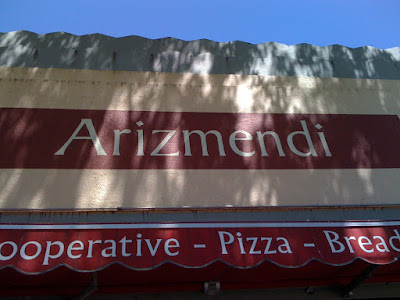 Although I've never been to Cheeseboard, a failure I will eventually remedy, I had a chance to try another sister pizza co-op in Arizmendi not too far from the market. One pizza a day; that day's was a simple basil, tomato, and goat cheese. But living in New York has taught me one thing--good pizza is all about good ingredients. And simple can go a long way. I will say that California pizzas typically favor interesting toppings, while New York pizzas focus on core ingredients. For example, the pizza I had didn't even have tomato sauce. Unless it's a white pizza, you wouldn't see that in New York. Of course Zachary's is an exception to the deemphasis of tomato sauce in California. But then again, that's not exactly "California" pizza either. Arizmendi still delicious. Can't wait to try the mothership of co-op pizza. 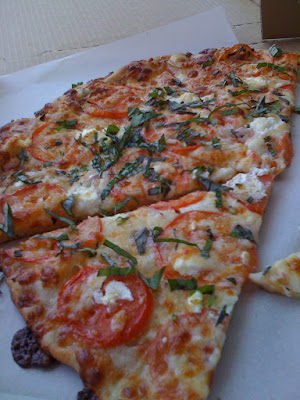