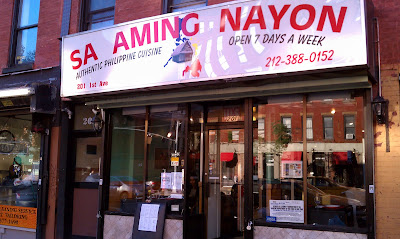 Filipino cuisine has not made a huge impact on the American dining scene. You're hard-pressed to find a Filipino restaurant in any area without a large Filipino population. Luckily, when two of my Filipino friends were talking about a new restaurant open in East Village, I jumped on the opportunity to go with them.
More...
Even in large Filipino enclaves there are seemingly few restaurants. After asking around my Filipino friends, my guess is that two major factors make these places so rare.

Unlike other Asian cuisines, Filipino cuisine has little recognition in America. With Chinese, Japanese, Thai, and Indian being the dominant Asian flavors, there is certainly an entry space for Filipino food. However, it is relatively unknown. Asked to name Filipino dishes, I could only come up with a handful--lumpia, adobo, pancit, lechon, sinigang, halo halo. Many of the flavors of this cuisine are amenable to the American palate. The food is not that exotic (with the clear exception of balut), given the other mainstay Asian cuisines in large American cities these days.

Unfortunately, most Americans experiences with Filipino food are in Jollibee and Goldilocks. Neither of those chains have the diversity of dishes that I believe America is ready to receive.

The other factor I frequently hear is that Filipino food is very tied to homecooking. Having never been to the Philippines, I couldn't tell you how prevalent restaurants are, but every Filipino will tell you that the best place for food would be at home. Although Sa Aming Nayon was my first Filipino restaurant, I've had Filipino food at home dinners, debuts, and weddings. I'll agree, some of that food is fantastic, but I don't see how the better of those cooks can't translate those dishes to a commercial setting.

I came to Sa Aming Nayon with two Filipino-Americans. We started with a lumpiang Shanghai, a Chinese style lumpia with pork and shredded cabbage. Reminiscent of Vietnamese chả giò fried spring rolls, I always find the smaller size of lumpia much more appropriate than the gigantic Chinese-American egg rolls.

For a vegetable dish, we ordered a pinakbet, a Ilocano dish of boiled vegetables with a strong anchovy or shrimp paste. One of my contributions from my limited Filipino vocabulary was the chicken and pork adobo. Adobo, from what I've heard, is an incredibly simple and satisfying stewing dish that you can make yourself. And that's inherently what most of Filipino cuisine is--cheap comfort foods. For starch, we had a pancit palabok thick rice noodles mixed with a savory sauce. Previously, I though pancit was stir-fried, but the dish we had was not. Of course, since this is a Filipino restaurant, we also received several bowls of white rice. 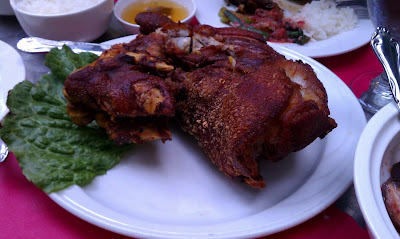 The biggest dish we had was the crispy pata, pictured above. A deep fried pig knuckle, we weren't quite sure how to dig into it. The skin was so thick and tough that the butter knife the restaurant gave us to carve it up proved less than sufficient. We eventually sent it back to the kitchen to be chopped up. Delicious crispy skin well flavored meat, as difficult as it was to eat.

Giving us a dull knife for the pata was just one example of how this new restaurant is still getting on its feet. We had quite a few issues with service. The table next to us received the wrong check and had to wait twenty minutes or so to clear up the problem. Our own check was incorrectly calculated at first. However, for a New York restaurant, the food was appropriately cheap; the four of us got out for about $16 per person. I'd like to come back when their operations are more polished.