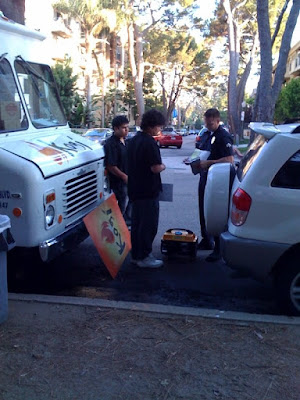 Step away from Twitter for a day and it feels like you've been out of touch for a week. Upon returning from a day trip to Universal Studios, I discovered the gem of drama surround Kogi's rebuff of Food She Thought. As luck would have it, the food gods blessed me with cosmic coincidence that Kogi would actually be a block outside my apartment today. So I stepped outside to see what the fuss was all about.

Flushed with the amusement at Kogi's PR failure for ridiculing a budding journalist, I couldn't believe that the truck would just happen to be within walking distance of me. As a disclaimer, I write all this despite never trying anything from Kogi. This isn't a criticism of their food, which could be excellent for all I know. Instead, this is an examination of food fanaticism and how silly we all look from the outside.

Repeatedly, those who have tried Kogi tell me that it's NO BIG DEAL. It's Korean food, in a tortilla. And if you haven't tried Christine's grandmother's kalbi, don't tell me that Kogi is the best Korean food. My stance on the phenomenon is the same treatment I give any taco truck. If it's there, I'll eat at it. Do I really need to scout out the @kogibbq locations, and even in extreme cases, chase the truck when it moves?

Of course Kogi's success is mostly through word-of-mouth and viral marketing, two very powerful strategies in this increasingly interconnected world. As a blogger, I can see how fast new restaurants can spread, or even how soon they close just by blogger buzz. If Kogi wants to forge ahead, it can't abandon its grass-roots supporters. I've heard stories of Kogi not appearing at stated destinations or even abandoning lingering customers to find bigger crowds. This kind of business inevitably leaves a bad taste in the mouths of the consumers. As of the writing of this, Kogi still has not issued any sort of response or apology for the backlash it's facing on Eater.

But back to the events of this evening. I was thirty feet from white truck and the throngs of hungry students before I realized that the shutters were shut and the signs were down. This was the scene in the photo above, an officer citing some remote ordinance about serving food at a T-intersection for more than thirty minutes in a residential zone. My first reaction was internal satisfaction that Kogi would get punished in a karmic way after its poor treatment of a fellow blogger. But my attention snapped back into the current moment when a Kogi groupie ran up to the driver excitedly. "You can park around the corner. I just checked and it's fine to park there in ten minutes. Wait, let me double-check with the cop." He runs over to the police car, swaps a few phrases, then comes back nodding his head in hopeful affirmation. The line of young men and women behind me gather in unison, like some sort of freedom march for the legal union of short-rib to tortilla. They turn the corner and camp a strip of curb for their beloved truck.

This whole scene was oddly surreal to me. In most cases, I'd be one of those kids. Food has become such a peculiar fascination for me that it wouldn't be far-fetched for me to chase Kogi across town. However, given the opportunity to look in from the outside, those students looked ridiculous. Suddenly, all the images of food porn paparazzi (myself included) swarming a dish came to mind. It's funny to imagine the scene, and I can easily see why people are so vocal against the food blogging surge. We really just take ourselves too seriously. I'm not trying to cast doubt on the passion of any of my fellow foodies, but have we gotten so carried away in this journalistic hobby that we've lost sight of what brought us into it in the first place? I've been tempering my blogging as of late with my impending departure looming overhead. And I'll tell you, it's been nice just eating for the sake of eating, without notepad in hand or camera around my neck. 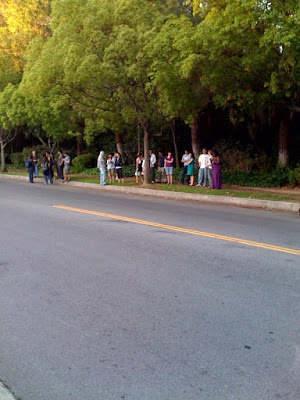 Poor groupies waiting there for a truck that never came

Despite the attention paid by the customers in preparing a truck stop, Kogi actually turns the opposite direction and drives away. I laugh to myself and walk back to my apartment to twitter share the ticketing picture. Half an hour later, I take a peek outside; there are still a dozen or so people hovering over that curb with fingers crossed. At the head of the pack--the guy who checked the street signs and cleared the location with the cop. He was looking down at his shoes, stomach probably growling. The light changed and his head perked up--the knock-off Calbi truck just drove down the street.

There's only one word to describe all of this: delicious.

not say anything you know, harsh, but once these dumb kids realize that real galbi > kogi galbi, the hype would die down. i mean, with hmart popping up everywhere (with their marinated meats counter!!!), you'd think that these tacos would be crazy easy to replicate at home.

eek..that's harsh. I've sorta been observing Kogi since its earliest days and seen how they've grown.

It's sad that they've become such a hit without any of the natural, steady growth that it takes to be a real success. I think of Scoops when i see a business that could explode if it wanted to, but chooses to keep making high-quality product day-in and day-out.

I really wonder about Kogi's quality since it's proliferated so much. It's definitely a success in viral marketing, but with today's PR disaster, we'll have to see the outcome. Great piece, btw.

That was some fast blogging on your part, and yes, nice piece. I remember the scene of everyone hovering over the lady carrying the basket of caneles with our cameras. I'm sure we looked ridiculous. Sometimes it's nice to go back to a place you've blogged about so you don't have to worry about taking photos/notes.

Great social commentary about the Kogi phenomenon. Way to set the scene, especially by spotlighting people who waited for a truck that drove away, never to return. Kogi's viral marketing has always been more compelling than their food, which definitely isn't worth chasing down or waiting for in line. It will be interesting to see how their PR assault will affect business.

Your thoughtful commentary on both the ticketing and PR incidents, and, well, our own food blogging mania as well leads me to leave the only public commentary I will make anywhere further on all this.

I find Kogi to be delicious. I have written several reviews, one having been quoted on NPR when they did a piece about the food a few months back. Their food tastes good (particularly their sliders, oh my). Authentic Korean it is not, I prefer Cho Sun Galbi if I am going whole hog.

I don't hold any ill will toward the company and I honestly think they are unaware of the ire directed at me via not just one but three emails from their PR "agent". However, as a business they must perform due diligence with respect to zoning and permit issues as I must perform due diligence when learning about journalism as a new endeavor, clearly sometimes the hard way.

Thanks for a lovely and thoughtful piece. Should you choose to stop blogging you will be missed.

Ila: Yes, it's easy to be critical of these kids. But you were young and impressionable too at one point. For students though, I can see how they might be more limited by their options if they don't have a car and live in the dorms. If that's the case, a truck delivering Korean tacos would be a Godsend.

Matt: Still have to check out Scoops. From all the publicity you give them, maybe you should just handle all of Tai's PR.

Burumun: Returning to old restaurants is certainly a good way to take it all in without the intrusiveness of criticism. But I'm afraid sometimes we might miss the full experience the first time when we're so focused on capturing it.

Food GPS: It's been a day and still no response from Kogi's PR. At this point I wonder if they're just going to try to brush this aside and ignore it.

Liz: Well part of due diligence is learning through trial and error. I think getting the response that you did had more impact on your site than if you just got the answers to begin with. The important thing is to take the critical comments too, and learn from the experience.

Haha, interestingly enough, I hadn't even written anything about Scoops on my blog until recently! I just tell people by word of mouth, but I figure it was time to say something on the blog. I would handle their PR except if you knew Tai, he hates that approach. Slow, steady, word of mouth, good product, to him those are the makings of long-term success and it shows.

Awesome post and catching all this on the fly. this reminds me of the game used to play, called lemmings! :) Really pathetic and almost feel sad for those poor people. Kogi is okay at best and they're not missing out much despite all the hype