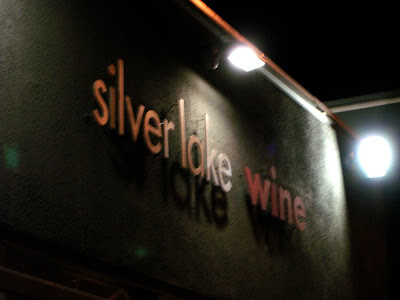 As a follow up to our dinner at Canelé, we headed over to Silverlake Wine for CakeMonkey, sparkling Syrah and the Let's Be Frank hot dog truck.
More...

I've mentioned before how dinners with bloggers inevitably become marathons. Don't get me wrong, I value always having a place I need to check out and great friends to bring me there. Silverlake Wine, frequented by Mattatouille and Christine every Thursday for wine tasting, focuses on "boutique, small production wine in all price ranges around the globe." When we arrived, the place was packed, but I loved the feel of the store. The checkout counter is in the front. You go inside, open up whatever bottles you'd like in the store, and pay when you leave. It seems like a very casual system, but one that's not intimidating at all to a stranger or a budding oenophile. They offer tastings Sundays at 3, Thursdays 5-9, and Monday 5-9. 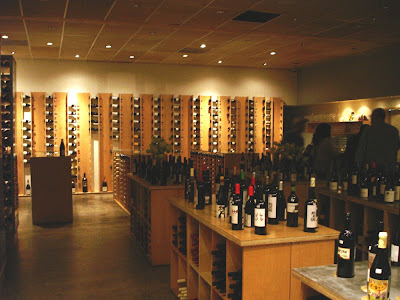 Cleared out by the time we left at 11

During dinner, Danny kept raving about something called CakeMonkey. Upon inquiry, he could only tell me that I'd have to try it for myself. I imagined a full-sized edible monkey made of cake. When I arrived at Silverlake Wine, I discovered the cookies he was referring to. Decadent hardly describes these circular morsels of oatmeal cookies sandwiching maple vanilla buttercream called Li'l Merri's. When a cookie bends under its own weight, you can imagine how much butter is in each one of them. I happily ate one, but more than that at a time might be too rich. Plus, having worked at Ben and Jerry's in high school had given me a natural aversion to buttercream. There's nothing like seeing buttercream by the bucket load that will turn you off to it. 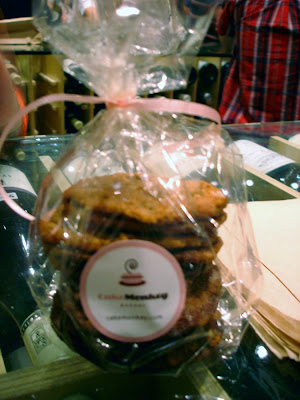 And finally the dogs 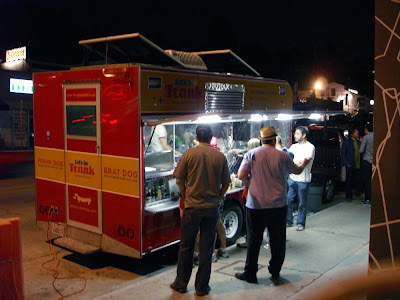 The other draw of Silverlake Wine is the Let's Be Frank hot dog truck parked outside on Thursday nights. After hearing Fiona raving about Let's Be Frank being better than Wurstküche, I had to investigate. We ordered the all three of their frank offerings and compared. 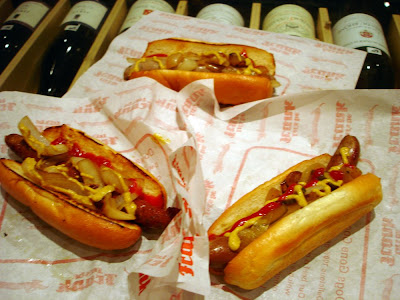 Biting into each of these dogs, I realized that I can't compare Let's Be Frank to Wurstküche at all. I still think the best hot dog in LA is Pink's, but I'll give best sausage to Wurstküche. There are different criteria for rating hot dogs versus sausages in my opinion. For sausages, I focus on the combination of flavors and I'm looking for a heavy, complex mouthfeel. Contrastingly, for hot dogs, the appeal is always in the casing. The best hot dogs, like Pink's or Gray's Papaya in New York, have a snap that's unparalleled. I want to bite into a hot dog and have it bite right back at me. Let's Be Frank was somewhat in the middle between the two. Without quite as much snap as a Pink's hot dog, but definitely not as satisfying flavor-wise as Wurstküche. Still, they make a great frank, just not my favorite. Paired with a few white beers from Silverlake Wine, this made a fantastic second dinner/snack.

It seems like the casing is the most important thing in a hot dog, so how vital is it in a sausage then?

Aaron, the next Thursday you head to Silverlake wine, let us know. I live right down the street and am a frequent customer. Kevin, I use uncased sausage in cooking a fair amount. The casing is only necessary if you want the sausage to retain structural integrity. :-D

I agree with Liz, the casing in sausages is not nearly as vital. Think breakfast sausage, it's completely absent. Also, I prefer natural casing made from real intestines to the collagen ripoffs.

I imagined a full-sized edible monkey made of cake. <-- LOL! Man, I had a chuckle at that one at work just now.

You're right about one thing, they're pretty damn rich. Thankfully Matt and I just share a bag or otherwise, no bueno....

My two favorite things in life!

There's nothing like seeing buttercream by the bucket load that will turn you off to it.Lej en pølsevogn

The checkout counter is in the front. You go inside, open up whatever bottles you'd like in the store, and pay when you leave. Lej en pølsevogn